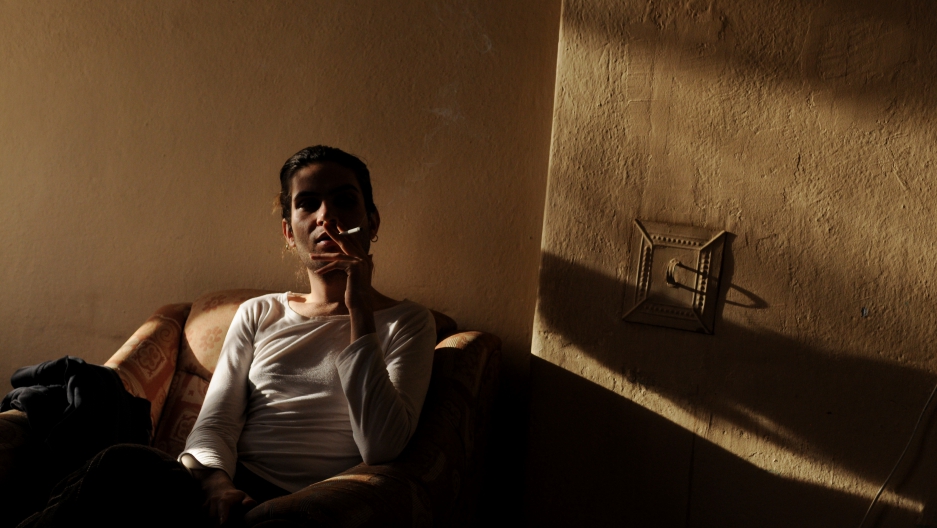 Artin, 23, arrived in Turkey 14 in 2007 and was going to Toronto. He was one of about 15 transgender women and 75 gay men at a party in Isfahan, Iran in April 2007 that was busted by morals police. Trans women were separated and jailed, beaten, questioned and humiliated for two weeks. Finally all faced punishments of $1300 fine and 80 lashes. Artin asked for an appeal and fled by train to Kayseri.
Credit: Kate Brooks
Share

On this International Day Against Homophobia and Transphobia, GlobalPost Special Reports launches a continuing series about gay, lesbian and transgendered refugees, following upon our extensive reporting on LGBT rights around the world, "The Rainbow Struggle."

Currently living in Nevshehir, a small and conservative city in Turkey’s Capadoccia region, Amin says, "I found hope in a newspaper article. I read the word ‘transexual’ and it saved me.”

At last, Amin had a word to describe how he felt. “I felt that I was born again. I felt like a dead person before.”

Although Iran is considered to be one of the most dangerous places in the world to be lesbian, gay, bisexual or transgender (LGBT) — the criminalization of same-sex acts puts homosexuals in a tremendously perilous situation and can result in execution — it is legal to change genders in the country.

In 1967, Ayatollah Khomeini issued a fatwa sanctioning sex changes. The fatwa didn’t have significant legal or political reach until after the revolution in 1979. It was re-issued in 1985, declaring sex changes legal for “diagnosed transsexuals.”

The government is only one variable including social, familial, religious and legal pressure to have sex change operations.

Shervin, a 19-year-old Iranian refugee living in Kayseri, Turkey, recalls his therapist advising him that he had two choices: get a sex change or leave the country. “He had been working in the field for 30 years and he said that he had come to the conclusion that the only option [for me] was to get a sex change — regardless of whether or not it was wanted — or to leave Iran.”

“It’s difficult to document direct involvement or policy on the part of the Iranian government to try to pressure individuals into sex reassignment surgery,” says Faraz Sanei, researcher for the Middle East and North Africa Division at Human Rights Watch. “Assessing the number of coerced surgeries, executions or corporeal punishment for homosexuality in Iran is exceedingly difficult — and controversial. If you take all of that together, you see why there is a strong incentive actually for individuals to 'become legal.' There is a way out.”

Saghi Ghahraman, head of the Iranian Queer Organization, a Toronto-based organization that helps LGBT refugees, says that sex changes do not necessarily translate into fulfillment or acceptance.

“Maybe a decade ago homosexuals thought this was a way. It took a long time for many homosexuals who did actually do sex change operations to understand that if you are a homosexual, you don’t want to make love to another person as the opposite sex — you want to be the same sex. But they wouldn’t understand that until they had the other body, and it was too late. They couldn’t change it.”

For those who actually do have an inner gender identity that doesn’t match their physical characteristics — the definition of transgender, according to the American Psychiatric Association’s Diagnostic and Statistical Manual — the accessibility of sex change surgery in Iran could be viewed positively.

But even for those individuals, a life in Iran can be extremely difficult.

Amin says that identifying as transgender, though an emotional relief, did not make external life any easier. After partial surgery, he experienced discrimination at his job and rejection from his family. Eventually it got so extreme he decided to leave, tracing the increasingly well-worn LGBT refugee route to Turkey.

“Sex reassignment surgery is legal in Iran but they face a lot of violence,” says Hayriye Kara, an attorney working for Kaos GL, a Turkish LGBT rights organization.

The problems are also financial and medical, Kara says. “It’s almost impossible to get work permission,” which means that refugees work either illegally or not at all, leaving little money to cover housing and both physical and mental health needs.

The consequences of the fatwa and the legalization of sex change surgery in Iran are as impossible to quantify as the executions and floggings of homosexuals are. A 2004 study conducted by Parsi based on refugees he worked with suggested that approximately 45 percent of sex changes in Iran are forced or coerced, performed on homosexuals rather than transsexuals.

Kara says that when refugees arrive in Turkey — be they homosexual or transgender— conditions remain far from easy.

“They have really big problems in daily life,” she says. “They face discrimination because of their sexual orientation and gender identity by authorities and police. Sometimes they face violence in the street and go to the police but the police don’t provide protection. Most of the time they’re scared to report the attacks.”