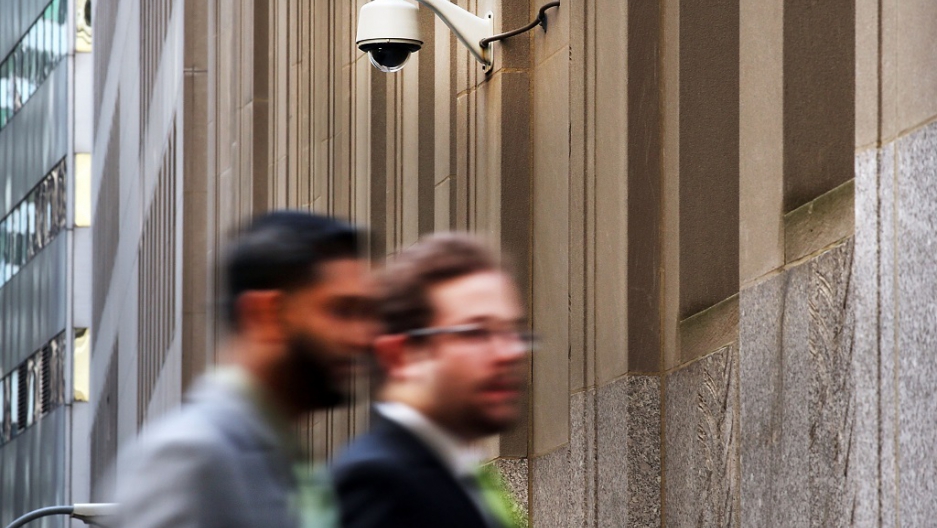 People walk by a surveillance camera along a street in the Financial District on April 24, 2013 in New York City. Following the twin bombings at the Boston Marathon, a new focus has been placed on surveillance cameras, which have become common in most metropolitan centers across America. The FBI used footage from surveillance cameras to identify the bombing suspects, which eventually led to their capture. Despite the security role of the cameras in law enforcement, numerous civic groups and privacy advocates are still opposed to the use of surveillance cameras in public spaces.
Credit: Spencer Platt
Share

As the recent revelation of a secret Justice Department seizure of Associated Press phone records highlighted, US journalists are facing new challenges in protecting the identities of sources.

Outraged since the AP investigation came to light, news agencies and members of the press are ratcheting up pressure on the Obama administration to prove its commitment to uphold the First Amendment.

But, in the age of open data, should journalists expect legal protection to be enough to safeguard their work? Instead, members of the press might do better taking matters into their own hands.

It's no longer tenable to simply trust the government not to monitor the press, and the responsibility to protect a source’s anonymity remains with the journalist. A new ethical standard may be approaching: the need to protect the identities of sources from prying eyes with technological tools.

But going up against law enforcement agencies equipped with cutting-edge surveillance technology and access to unlimited funds isn’t easy. How can journalists, especially freelancers, protect themselves and their sources in a standoff with federal titans of law enforcement?

1. Learn how to shield your identity online.

One day’s worth of a journalist’s browsing history, meanwhile, could yield large amounts of information regarding their work, their sources and their stories.

Journalists can protect sources and personal privacy using Tor. The Tor network is comprised of a number of proxy nodes through which the user’s connection is routed, creating randomly generated private network pathways that change every ten minutes.

The Department of Justice has proven that speaking with sources over the phone is no long a viable means of off-the-record communication for journalists. Call logs, online chat logs and phone records are stored by telecommunications providers and are easily accessed by law enforcement.

To add a level of protection for sources, journalists can encrypt and anonymize voice and online chat correspondence. Whisper Systems' RedPhone is one trusted method for ensuring the privacy of phone calls, allowing two users to speak through end-to-end encryptions so that the call can't be intercepted. TextSecure, also developed by Whisper Systems, does the same thing for text messaging.

If a journalist needs to correspond with a source online, Cryptocat is a browser plugin that provides a heavily encrypted, secure instant messaging environment. Using Cyrotpocat in the Tor browser masks both the journalist’s and the source’s IP addresses, providing an encrypted chat platform.

In most cases, journalists store correspondence with sources, quotes and stories, whether for publication or not. The fact that the information exists is a liability that threatens a source’s privacy; it's arguably an ethical imperative for the journalist to take appropriate steps to secure the data.

TrueCrypt is a handy open-source encryption tool. Don’t let the techno-babble intimidate you; encrypting a drive or any other storage device isn’t difficult.

Encryption isn’t the only benefit of using TrueCyrpt. By hiding the volume of encrypted storage, TrueCrypt also disguises any sense of the amount of imformation being protected. Refusing to decrypt a hard drive may earn an obstruction of justice conviction for a journalist protecting a source. However, if it appears that the storage device doesn’t exist, the journalist isn’t forced to refuse decryption in the first place.