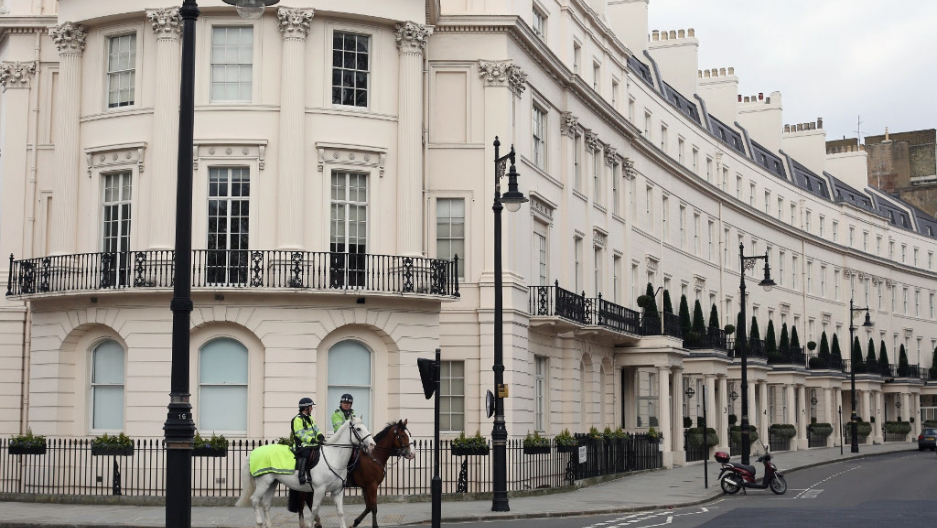 A terrace of residential properties in the affluent Belgravia area of London on April 6, 2013
Credit: Oli Scarff
Share

Editor’s note: This is the second in a pair of stories exploring London’s extraordinary housing market. It is part of our Divided Kingdom series, which examines the tensions and disparities of modern Britain.

LONDON, UK — She wore high heels, shorts and a tan that’s impossible to achieve naturally in London in early May. He sported a blue suit and carried a small dog on his arm.

“I think we could get away with a private jet, don’t you?” he said as they glided down the street, just a snippet of overheard conversation in Knightsbridge, one of London’s poshest districts.

Located to the southwest of the city center, this neighborhood and adjacent Belgravia have long attracted some of the city's most well-heeled residents, both British- and foreign-born. But the newest arrivals, longtime residents say, are changing the atmosphere.

The rows of cream-colored Georgian townhouses here used to be where London's wealthiest wanted to live. But more and more often, they're becoming objects the world’s wealthiest simply want to own — to visit occasionally, perhaps, but not to make as their homes.

Denise Olver has lived in her townhouse on Knightsbridge’s Lowndes Square for 52 years. She’s watched her neighborhood change, and isn't impressed.

“It used to be a delightful little village, really,” she said behind cat’s-eye glasses and a silk scarf as she carried groceries home. “It used to be posh. Nowadays it’s new money, and it comes from miles away.”

More than half of London’s most expensive homes were purchased by foreigners in the last year, according to research from the Knight Frank estate agency published in the Guardian. Wealthy buyers — mostly from Russia, China, India, the United States and United Arab Emirates — have helped push prices in prime London districts up 57 percent in the last four years, the paper reported.

Nineteen of the country's 20 most expensive properties were bought by foreigners last year, according to the magazine Tatler. In London, where housing is at a premium, 60 percent of new-build houses were snapped up by foreign investors.

For some, London property is seen chiefly as a secure investment — with the bonus of providing a place to stay when visiting the capital.

The city has earned a reputation as “a safe haven for money,” said Vidhya Alakeson, deputy chief executive of the Resolution Foundation, a think-tank. “A lot of that money is coming to London and is buying properties.”

Few residents symbolize the transformation as much as the inhabitants of One Hyde Park — whoever they may be.

The $1.7 billion apartment building was touted as the world’s most expensive residential development when sales opened in 2007. The 80-odd apartments in its four sleek towers have sold for up to $214 million each.

The ground-level storefronts house a branch of the Abu Dhabi Islamic Bank and a McLaren dealership. The building sits directly across the street from the Knightsbridge branch of Burberry and near Harvey Nichols, the famed department store that sells $1,500 Fendi sunglasses and $23 jars of goose confit.

A Vanity Fair investigation published in April found that of the 76 apartments sold by January, only 12 were registered in the names of real humans. The rest were officially owned by a variety of business entities and shell corporations masking the owners’ identities.

“It’s much more useful to think of it as a corporate headquarters than a home,” said Yolanda Barnes, director of world research at the real estate firm Savills. “Some of [those residents] are wealthier than the average FTSE 100 company [listed on the London Stock Exchange]. The fact that they happen to live in their headquarters is kind of a red herring.”

Nearly 40 percent of buyers in London’s best neighborhoods don't intend the properties to be their primary homes, Barnes told The New York Times.

The properties for rent and sale in the window of Chesterton Humberts, a high-end real estate agent, help define what “prime property” means. A three-bedroom house in Knightsbridge goes for $9 million, a three-bedroom apartment in Belgravia for $8.4 million.

The H.R. Stokes stationery shop has occupied its Belgravia storefront for 150 years. When the current owner bought the shop 25 years ago, Elizabeth Street was home to butchers, grocers and other businesses a residential neighborhood needs. Most of them have closed.

“It’s nice for us to have a more international community,"  said the owner, who preferred his name not be used. "On the other hand, we’d prefer the houses to be occupied more."

A longtime customer at the cash register agreed. “I don’t think it’s a village now. It’s more like an airport lounge.”