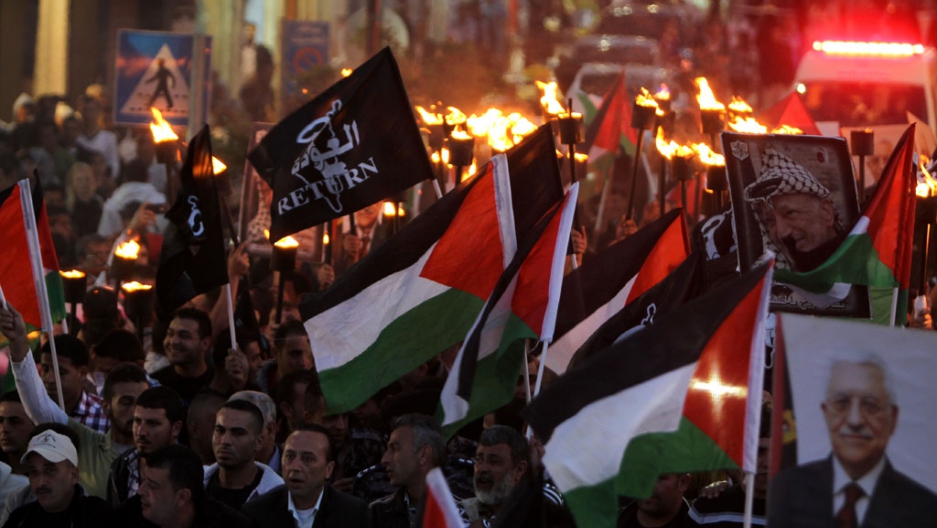 Palestinian protestors hold up torches and pictures of their late leader Yasser Arafat and current leader Mahmoud Abbas during a rally to commemorate the 1948 creation of Israel known in Arabic as the "Nakba" (catastrophe) in the West Bank city of Ramallah May 14, 2013. Palestinians are preparing to mark Nakba day on May 15 which commemorates the exodus of hundreds of thousands of their kin after the establishment of Israel state.
Credit: ABBAS MOMANI
Share

Tens of thousands of Palestinians protested Wednesday on the 65th anniversary of the "Nakba" or the Day of Catastrophe, which marks their displacement after the creation of the state of Israel.

May 15 is the day Palestinians choose to commemorate the displacement of hundreds of thousands of their kinsman in the aftermath of the Arab-Israeli conflict in 1948.

Protesters chanted, "The right of return will not die."

While Palestinians still call for a return to their former homes, Israel views such a return as demographic suicide.

"In the past, attempts have been made to erase our national identity and memory. But today we are a people whose presence on the world map cannot be ignored," Palestinian Authority President Mahmoud Abbas said on TV, according to Israeli newspaper Haaretz.

"A majority of the world's nations, including the United States, acknowledge our right to an independent Palestinian state within the 1967 borders."