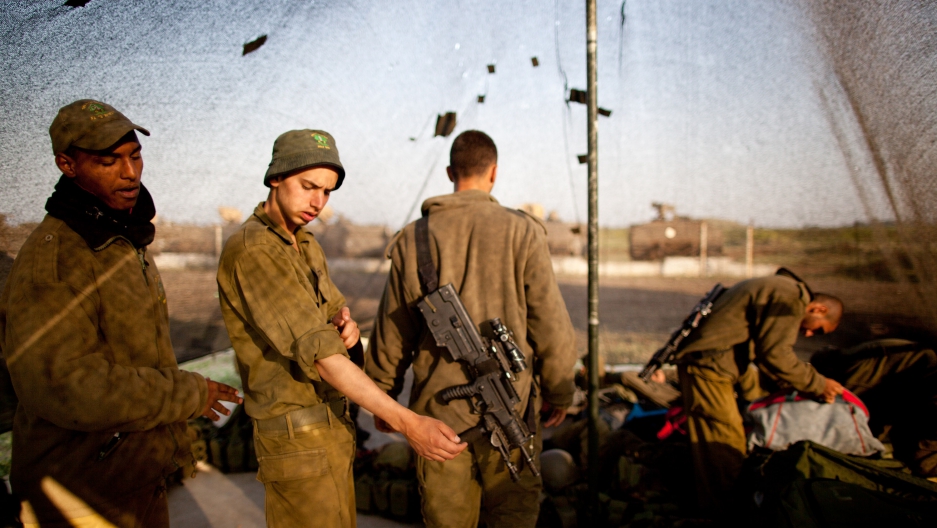 Israeli soldiers of the Golani brigade prepare during a military exercise May 7, 2013 near the border with Syria, in the Israeli-annexed Golan Heights.
Credit: Uriel Sinai
Share

Mortar shells fired from Syria have hit the popular tourist site of Mount Hermon in the Israeli-occupied Golan Heights.

However, an Israeli Defense Forces spokesperson told Haaretz that based on similar incidents in the past, they were most likely to have been errant shells fired during fighting between Syrian President Bashar al-Assad's army and rebel forces.

No one was hurt and no damage was reported.

The Associated Press reported that the shells landed on an empty ski slope early Wednesday.

While the Israeli military did not fire back, the IDF is widely believed to have carried out three air strikes on suspected Syrian weapons caches being transported to Lebanon’s Hezbollah militants.

Many Israelis are sensing that the Syrian civil war is coming closer to their country.

Some in Israel fear that the Syrian Golan will become lawless and a stronghold of terrorists, presenting a direct threat, YNetNews wrote.

Two mortars fell in the Golan Heights, fired last Monday afternoon during battles between the Syrian army and rebels near Ramat Magshimim, the news website reported.

Separately, a Kassam rocket launched in Gaza landed in an open area in the south of the country in the early afternoon.

Some experts suspect it was lobbed over the border to mark Nakba Day — when Palestinians commemorate their displacement during the war over Israel's 1948 creation.

Whatever the motives behind these blasts, either incident stirred Israelis who were celebrating the Jewish holiday of Shavuot.