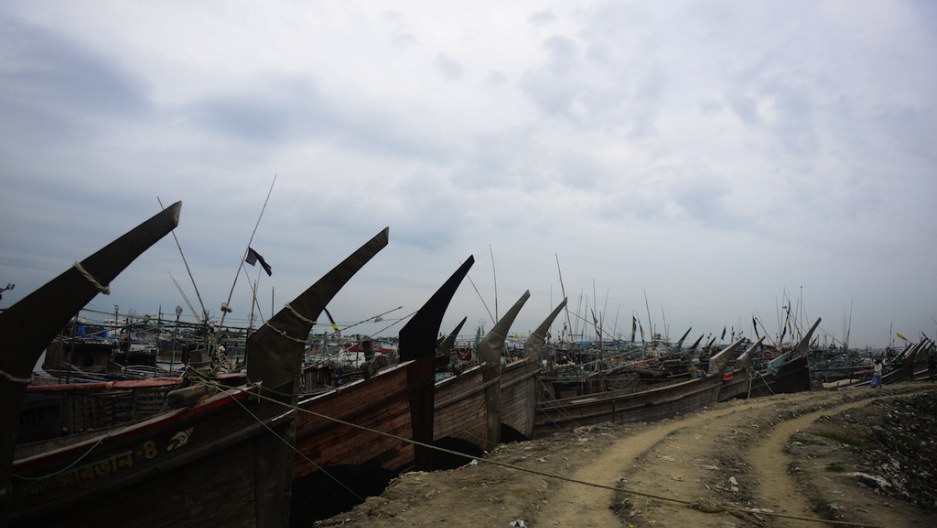 Fishing boats tied up in the harbour of Chittagong on May 15, 2013 during preparations for the expected arrival of Cyclone Mahasen.
Credit: Munir Uz Zaman
Share

The UN Office for the Coordination of Humanitarian Affairs (OCHA) said the cyclone, now weakened to a category one storm, still puts more than eight million people at risk.

"Mahasen could be life threatening for millions of people in Bangladesh, Myanmar and India," said Humanitarian Chief Valerie Amos. "Humanitarian organizations are working with Governments in Bangladesh and Myanmar to help people prepare for the cyclone."

It was initially feared Mahasen would strike Myanmar’s restive Rakhine state and its thousands of internally displaced Rohingya Muslims, but it now appears the cyclone will strike north of the Bangladeshi city of Chittagong, sparing Myanmar a direct hit.

“This part of the world is regularly hit by major cyclones and so everyone is taking this threat extremely seriously and making sure the right measures are in place to mitigate the impact and place everyone on alert,” said Oliver Lacey-Hall, head of OCHA’s regional office for Asia and the Pacific.

On Tuesday, about 50 Rohingya Muslims were believed drowned after evacuation boats struck rocks and capsized off Myanmar's coast.

More from GlobalPost: Boat with at least 100 Rohingya sinks off Myanmar coast as cyclone nears

"We have been using loudspeakers to alert both documented and undocumented Rohingya refugees of the dangers of the cyclone," said Mohammed Kamruzzaman, a magistrate in charge of a Rohingya refugee camp in Cox's Bazaar. But many have refused to leave their makeshift camps, saying they mistrust the authorities, according to Reuters.

It's thought there are about 39,000 internally displaced persons living in the most vulnerable conditions after ethnic violence last year drove many Rohingya from their homes. A pre-evacuation plan is now underway, and the next stage, according to OCHA, could see another 100,000 evacuated. It's unclear how many people have actually been relocated.

“We are very concerned about the situation of displaced people in Rakhine state, particularly those in low-lying camps, and we are working urgently with the government to find solutions that are viable, said Lacey-Hall. “But we are running against time and lives are at risk.”