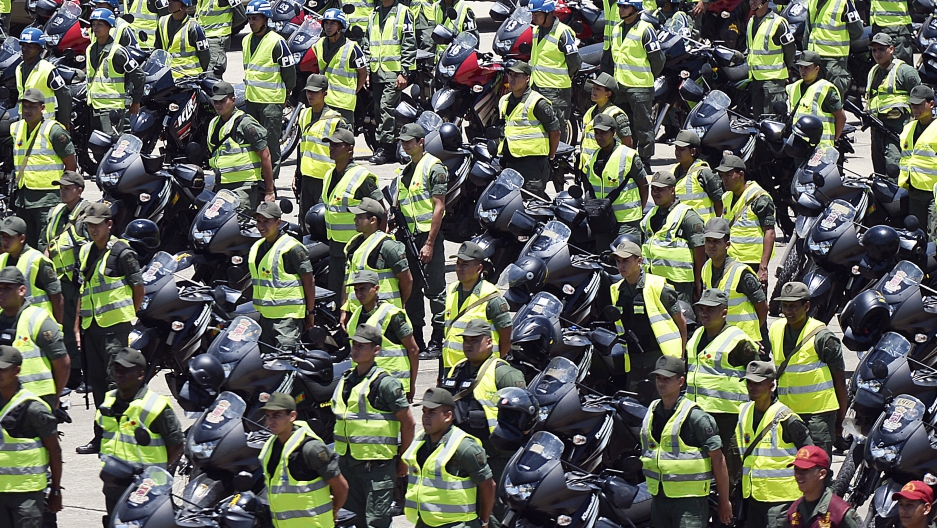 Some of the 3,000 Venezuelan armed forces before their deployment in Caracas.
Credit: Juan Barreto
Share

LIMA, Peru — Venezuela President Nicolas Maduro has launched a plan to fight crime in the streets of Caracas, with its first phase involving 3,000 military troops.

"Our armed forces are taking the streets to protect the people," Maduro said in a speech to military police and troops that was carried live on state television on Monday.

"I call on you to serve your country. It must be more than just patrolling. It must be a commitment of conscience, passion, and love."

More from GlobalPost: In Venezuela's prisons, inmates are the wardens

The plan, called "Secure Fatherland," is the country's latest attempt to lower violent crime in its capital city. It will create around 500 checkpoints around the city, and some 9,000 new police officers and around 1,600 National Guard officers currently in training will later join the program.

But the independent Venezuelan Violence Observatory said the statistics were worse than what the government had reported. The organization's numbers showed that criminal violence killed 21,692 last year, putting the annual murder rate at 73 per 100,000 inhabitants.

Still, many Venezuelans have long lived under a de facto curfew, afraid to leave their homes after dark. Even more than the shambling economy, the wanton bloodshed is viewed as the number one issue facing the country.

Yet while former president Hugo Chavez avoided even acknowledging the problem, Maduro appears keen to meet it head-on. It could be an attempt to shore up his own position with the opposition, which continues to accuse the new leader of electoral fraud. The opposition refuses to recognize his narrow victory in last month's presidential vote.

"If we can't resolve this, we won't have done anything," Maduro said, possibly reflecting the feelings of many of his countrymen. "If we can't defeat crime, then nothing else will be worth it."

Some of the 3,000 Venezuelan armed forces before their deployment in Caracas. Juan Barreto/AFP/Getty Images

Human rights groups are concerned that the armed forces' involvement in civilian law enforcement roles for which they have not been trained will lead to abuses. Yet many in Venezuela, including among the opposition, are exasperated with corruption and ineptitude in the police.

Many of the troops will be patrolling in the state of Miranda, which overlaps the capital, and whose governor is Henrique Capriles, the opposition candidate who ran Maduro close in the April 14 presidential vote.

However, Maduro's move was not being interpreted as a threat to the opposition by most Venezuelan media, which routinely report on the violence.

Maduro badly needs some good news, and a quick reduction in crime numbers would be a powerful platform for him to move on from the election controversy and divert attention from the crumbling economy.

The announcement that the military would be patrolling Caracas's streets came just days after Venezuela's inflation rate surged to nearly 30 percent, and on the same day that the cost of meat, chicken and milk would rise by 20 percent in Venezuela's price-controlled economy.