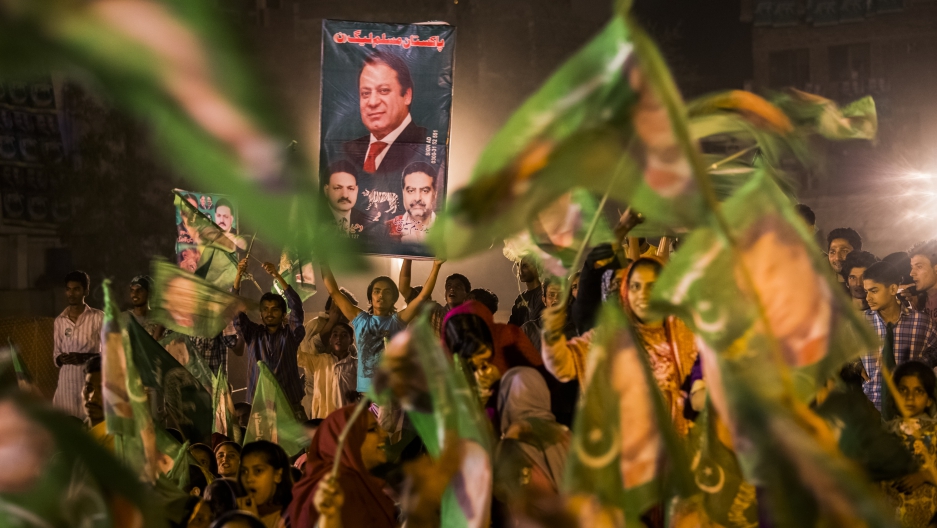 Supporters of Nawaz Sharif, leader of the Pakistan Muslim League-N (PML) party, who took the most votes in the country's election Sunday.
Credit: Daniel Berehulak
Share

Nawaz Sharif of the Pakistan Muslim League party appears set for victory and the chance to form Pakistan's next government.

Sharif, known as the Lion of Punjab, has been Pakistan's prime minister twice before. His last stint ended in a coup led by then military leader Pervez Musharraf in 1999, and Sharif spent years in exile in Saudi Arabia until he staged a comeback in 2007.

Sharif, 63, has found support for his pro-business background and his many years of experience, The Associated Press reported, with people hoping he can lead the country out of its economic woes including inflation and unemployment.

The BBC reported that unofficial results suggest Sharif had an easy win, but he is also reportedly in talks with independents to guarantee a majority. A party must have at least 170 seats in the country's national assembly to win an outright majority.

Sharif has already been congratulated on his victory by Indian Prime Minister Manmohan Singh.

Singh said on Sunday, "I look forward to working with you and your government to chart a new course and pursue a new destiny in the relations between our countries. I would also like to extend an invitation to you to visit India at a mutually convenient time."

Observers there found the fact that Pakistan held elections at all — as opposed to leadership change by coup — perhaps more significant than the winner, he added.

Pakistan showed it has a "genuine chance" of moving away from its "present path of dysfunctionality and violence," according to India's Hindustan Times newspaper.

Sharif has vowed to revive the peace process between Pakistan and its neighborhood rival India, which have fought three wars and continue to have a tense relationship.

"No doubt this is only the first baby step in wresting true control over Pakistan from the army and Inter-Services Intelligence agency (ISI)," GlobalPost's Overdorf said. "But Sharif's popularity may allow him to join Pakistan's judiciary in resisting military control over official policy.

"In other words, this is potentially a watershed moment for Pakistan, and, hence, India-Pakistan relations. But that does not mean immediate progress on thorny issues, such as the dispute over Kashmir or the prosecution of the planners of the November 2008 terrorist attacks on Mumbai — which India insists include serving members of the ISI.

However, the strengthening of democratic and civil institutions could well pave the way for additional progress against the extremist factions that have consistently derailed India-Pakistan relations."

US President Barack Obama has also pledged to work with Pakistan's next government. But the AP noted that the United States will keep a close eye on Sharif for his response to Islamic extremism. There is concern in Washington that Sharif, who is personally religious, won't crack down on militancy and groups linked to the Taliban or Al Qaeda.

Cricket legend Imran Khan, the leader of the Pakistan Tehreek-i-Insaaf party, will likely come in second place and has promised to provide genuine opposition.

More from GlobalPost: How not to hold a free and fair election

Despite the violent weeks of campaigning and voting irregularities, a European Union observer mission on Monday called the May 11 elections a positive step for democracy.

"The turnout in defiance of the threats against the process was an extraordinary vote of confidence in democracy itself," Richard Howitt told a news conference in Islamabad, according to Agence France-Presse.

Michael Gahler, chief of the mission, congratulated the country's election commission on its improvements but said "women and vulnerable groups" were still underrepresented in the polls.