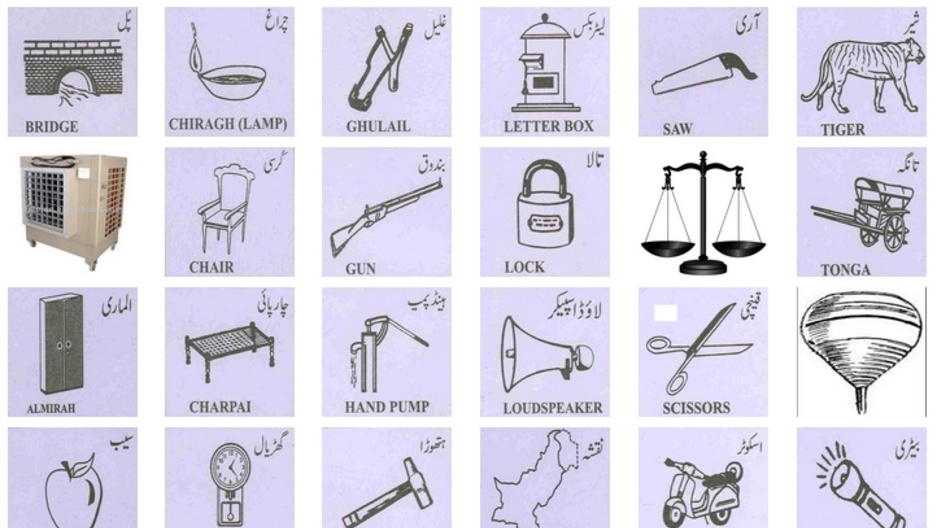 The streets of Karachi are covered in symbols these days.

On posters and painted on to walls, there are stylized icons of things like kites, tigers, arrows, cricket bats, ink pots and table lamps.

It looks like they were taken straight out of the board game Monopoly, but these are elections symbols.

When voters go to the polls, their ballots will not have the names of any contesting parties printed on them, but rather graphic symbols representing the candidates.

Using symbols on ballots has been standard procedure in Pakistani elections for decades, because over 40% of adult Pakistanis are illiterate.

Even for Pakistanis who can read, it could be confusing if party names were printed instead of symbols, as there are almost 150 parties contesting.

Many of them are breakaway factions of other parties, like the Pakistan Muslim League, which has seventeen factions contesting under slightly differing variations of the same name.

"Once a party gets allotted a symbol they build their entire persona, their campaign around that symbol," says Talat Aslam, senior editor of The News International newspaper.

As he points out, a symbol should ideally be something appealing to voters and represent a party's spirit. "So for example at the moment, Imran Khan has a cricket bat which of course suits him because he's been a cricketer in the past. Now the bat has become thematized by the party and there are giant bats being paraded around the city."

Abdul Qadeer Khan, the nuclear scientist regarded as the founder of Pakistan's atomic bomb project – and who is accused of leaking nuclear secrets to North Korea and Iran — is also leading a party that is contesting the elections.

He has conveniently been allotted with a missile as his symbol, and a large model of one has been put up near Karachi's international airport as part of his campaign.

Like the cricket bat and missile, party symbols are woven into all campaign material like posters, songs, speeches and TV ads.

In one of the most famous political anthems of the incumbent Pakistan People's Party (PPP), "Dila Teer Bija", the refrain says "The arrow will pierce the enemy's heart," in the Balochi language.

The arrow is the PPP's election symbol.

The PPP's chief rival in the elections is the PML-N, the party of former prime minister Nawaz Sharif.

The PML-N has a a tiger as its ballot symbol, which is portrayed in campaign material as embodying Sharif's spirit.

In the run up to the polls, the PML-N and Imran Khan's PTI Party have engaged in a playful war of words around their election symbols.

At a campaign rally in Rahim Yar Khan last month, Khan yelled to the crowd of charged supporters, "With this cricket bat, we will flog all of the circus tigers!"

Similarly, at a rally in Lahore last week, Nawaz Sharif's brother, Shahbaz, told the cheering crowd, "On the 11th of May, the tiger will be everywhere and the arrow and bat will have been destroyed."

But not everybody is happy with the current system.

Parties have to choose from a limited pool of symbols drawn up by the Election Commission, the government body that oversees the polls. Few get their first choice, or even something that means anything significant.

It is especially bad for independent candidates who have to draw from the dregs after all 150 parties have had their pick.

The leftover symbols are definitely not as impressive as tigers or arrows. This year, the symbols left over for independents included a toothbrush, a cassette tape, and a bed.

In a hole in the wall in Karachi's financial district, with just enough space to seat two people, is the campaign headquarters of Muhammad Shafiq Awan.

Above the door hang two plastic buckets. That is the election symbol allotted to him — a bucket.

"I was very sad when I had to choose the election symbol for my election campaign," says Awan.

He is running for a seat in the National Assembly, Pakistan's lower house, from the highly contested NA-250 electoral district in Karachi.

Awan believes the symbol allocation system needs to be reformed.

"[This] election symbol is forced upon me. The Election Commissioner must allow independent candidates to choose symbols as they want, not forced upon them."

Beyond just the allocation system, the symbols themselves may need to be updated.

"They're kind of extremely quaint," says news editor Talat Aslam, referring to the style in which the official election symbols are drawn.

"They come out of storybooks. They're drawn in a paticularly old-fashioned, childrens' schoolbook sort of way, that hasn't been updated in a long time."

But for now, Muhammad Shafiq Awan is making the best of a bad situation.

The bucket is a common household item here, so he believe it may actually serve him well, as a symbol of the common man.