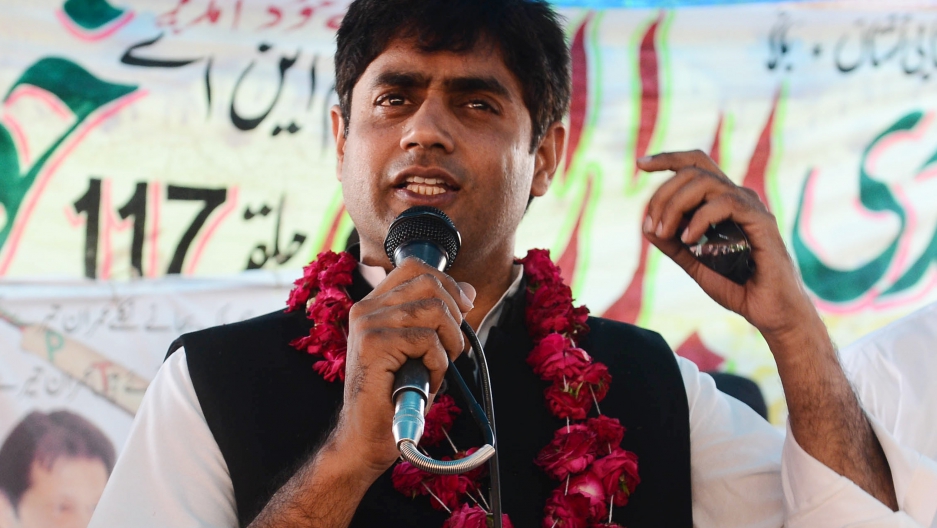 Abrar-ul-Haq, a candidate for the national assembly for Imran Khan's wildcard Pakistan Tehreek-e-Insaf (PTI) party addresses supporters during an election campaign meeting in the semi-rural area of Narowal in Punjab province on May 8, 2013.
Credit: Arif Ali
Share

Pakistan's Taliban has threatened in a letter to carry out suicide bombings during Saturday's election.

Meanwhile, the mood in Pakistan on the eve of the elections has been described as "dismal," with a US poll saying that the majority of voters for the first time considered the threat from the Taliban on par with that from the country's archrival India.

According to the survey on Pakistan by the Pew Research Centre, roughly nine in 10 Pakistanis also believed the country was on the wrong track, and about eight in 10 said the economy was in poor shape.

Concerns about extremist groups had risen markedly, the poll said, adding that more than nine in 10 Pakistanis described terrorism as a very big problem, with about half saying the Taliban was a very serious threat to their country.

Pew said in a press statement:

"For the first time since the Pew Research Centre began polling on these issues, the Taliban is essentially considered as big a threat to Pakistan as longtime rival India."

However, support remained low for the US extending its fight against the Taliban in neighboring Afghanistan.

Two in three Pakistanis said it was a good thing that the US planned to remove most of its troops from Afghanistan by 2014.

"At the same time, Washington’s use of drones to target extremists in Pakistan is widely unpopular."

Reuters, meantime, reported that the Al Qaeda-linked Pakistani Taliban had called for attacks in several parts of the country on Saturday, to disrupt "the system of infidels which is called democracy".

Pakistan holds its National Assembly elections on May 11, while elections for a total of 577 seats in the four provincial assemblies will be held on the same day.

The threat was made in a letter obtained by the news agency from Taliban leader Hakimullah Mehsud to the group's spokesman.

Since the start of April, more than 100 people have been killed in attacks by the Taliban — who regard the elections as un-Islamic.

The militants have targeted the more secular parties: the Asia Times wrote that Leftist political parties including the Pakistan People's Party (PPP), Muttahida Quami Movement (MQM) and Awami National Party (ANP) were on the hit-list.

However, they had not attacked the main opposition party led by former Prime Minister Nawaz Sharif, seen as having courted support from militant groups.

Sharif has said that Pakistan should reconsider its support for the US in its fight against Islamist militancy and said he would be in favor of negotiations with the Taliban.

Nor have the Taliban targeted the party of former cricketer Imran Khan, who advocates shooting down American drones and withdrawing the Pakistani military from the ethnic Pashtun areas along the Afghan border that are a stronghold of militants.

Pakistan's military, meantime, has said it would send tens of thousands of troops to polling stations and counting centers to foil any Taliban attacks.