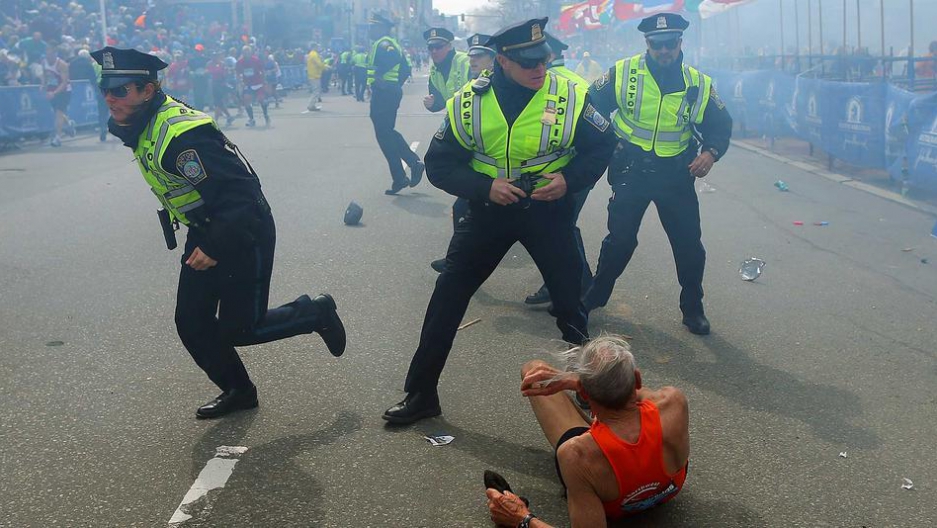 Boston police react in aftermath of explosions near the finish line of the Boston marathon, April 15, 2013. Photo via the Boston Globe.
Credit: John Tlumacki/Twitter
Share

JERUSALEM — It’s a Bond-like scenario: There are thousands of hours of film, and lives depend on isolating a single image from the morass of footage.

This is what the FBI faced in the immediate hours following the Boston Marathon bombings on April 15.

Raw images from store-owned security cameras, city-operated closed-circuit television (CCTV), and sketchy cellphone footage from private citizens had authorities scrambling to identify the culprits amid an ocean of both runners and spectators inside each frame.

But was it actually an innovative Israeli-made technology that snagged the Tsarnaev brothers, who allegedly committed the crime?

In 2011, the US government acquired Video Synopsis technology from the Jerusalem-based startup that created it, BriefCam.

The technology, which helped Norwegian authorities find mass murderer Anders Behring Breivik, separates a static background from a dynamic foreground, superimposing events in a way that an hour of activity can be viewed in just one minute.

The FBI is not commenting on the specific technologies that were actually used to eventually identify the two men as acting out of place at the event. But BriefCam's general manager for the Americas, Amit Gavish, told GlobalPost he believes it was used.

“The relevant agencies are clients of ours,” he said, referring to the law enforcement groups involved in the Boston hunt.

More from GlobalPost: Boston Marathon bomb attack was planned for 4th of July

Separating moving objects from a stationary background is fairly commonplace technology for companies that use surveillance cameras.

But what BriefCam’s Video Synopsis does is extract activity that took place at different times and present it as simultaneous events. It then condenses the time frame from 60 minutes of real-time activity to 60 seconds of review time, allowing the viewer to see all the events in a shrunken period of time and to individually interpret the findings.

“No other technology will allow them to do so,” Gavish said.

Ironically, the Hebrew University computer science professor who developed Video Synopsis, Shmuel Peleg, says he did not set out to provide police departments with a more efficient surveillance system when he began working on the technology five years ago. Instead, his aim was to “save time and family memories.”

“Looking at videos is just a pain,” he said. “It takes two hours to go over two hours of video you took at the family picnic. You’ll never watch it.”

At first, the technique failed. When both the background and the foreground were in motion, the algorithm failed to do its job.