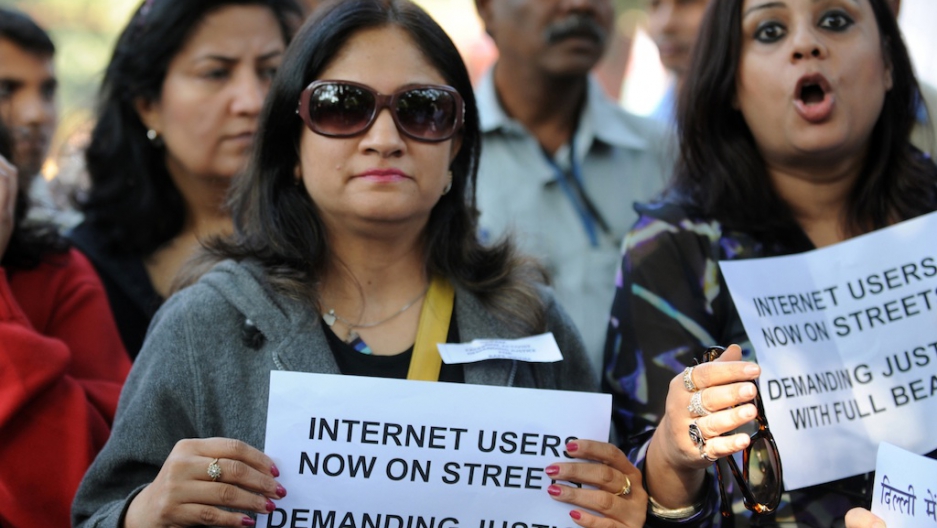 Indian Internet and facebook users shout anti-government slogans as they hold placards during a protest in New Delhi on December 21, 2012.
Credit: Raveendran
Share

NEW DELHI, India — The government has quietly started putting into place its new Central Monitoring System, a project that will give it access to its citizens' telephone calls, texts, and online activities.

The system, in development since 2009, will enable state agencies to monitor all digital interactions, the Times of India reported.

Work on CMS has been kept quiet for the past few years, although the newspaper reported that several government agencies ordered specialized equipment and systems for monitoring telecommunications.

India's government has steadily been increasing its access to telecommunications since the 2008 Mumbai bombings to help track militants and illegal activities.

The country — one of the world's fastest-growing internet markets — enacted its information technology law in 2000, and amended it twice, in 2008 and again in 2011.

As PCWorld described the new system,

The CMS will have central and regional databases to help central and state-level enforcement agencies intercept and monitor communications, the government said. It will also have direct electronic provisioning of target numbers by government agencies without any intervention from telecom service providers, it added. It will also feature analysis of call data records and data mining of these records to identify call details, location details, and other information of the target numbers.

Internet freedom activists and privacy experts worry the project offers far too much access to citizens' communications. They say official agencies allegedly misused and leaked tapped phone conversations, while the government has sought to quash dissent and silence critics on the internet under the guise of preventing hate speech.

"In the absence of a strong privacy law that promotes transparency about surveillance and thus allows us to judge the utility of the surveillance, this kind of development is very worrisome," Pranesh Prakash, the director of policy at the Center for Internet and Society, told the Times of India.

"Further, this has been done with neither public nor parliamentary dialog, making the government unaccountable to its citizens," he added.

The government last year blocked mobile phones and shut down social media sites ostensibly to prevent communal riots, but in the process blocked some 16 Twitter handles known to be critical of the government.

Critics of the CMS movement wrote a blog post arguing that the Indian government wants to use the law to censor "hate speeches and government criticism."

"We know the government today hates public criticizing it," the group Stop ICMS wrote on their blog. "The recent arrests of people for tweeting or posting on Facebook has proved that. Govt. does not like criticism that can be seen by everyone on the Internet."

The CMS program is in place in a "preliminary state" right now, with the full version expected to be in place by August 2014.