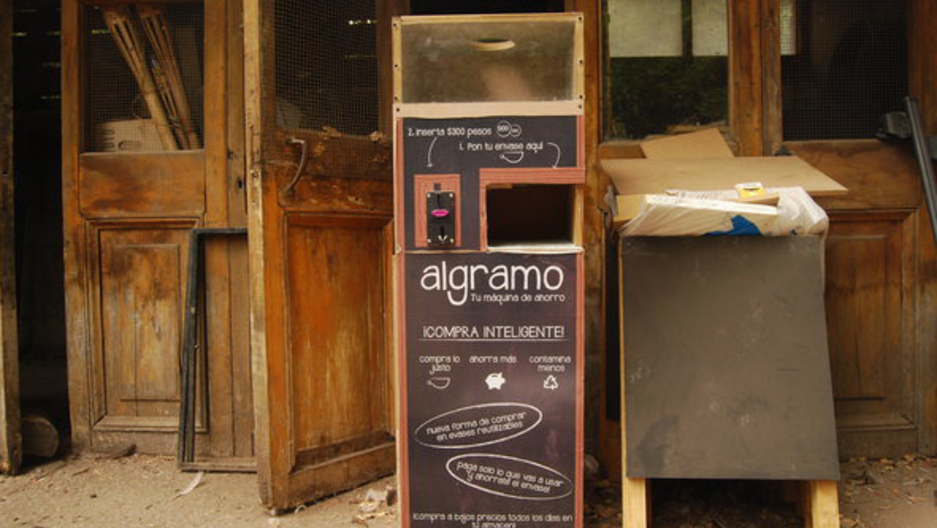 This Algramo machine distributes detergent, so families can buy as much or as little as they can afford, but not pay for packaging they don't need. (Photo by Joaquin Trujillo Campos.)

For people in a poor neighborhood of Santiago, Chile, money can be so tight that it’s a hardship to buy something as basic as a box of laundry detergent.

They often wind up buying laundry soap in small packets, which ultimately costs them more.

Veronica Baez, who lives in Huechuraba with her husband and three teenagers, says it’s a constant struggle. Families in this shabby neighborhood often live off $400 a month — less than half of Santiago’s average salary.

See photos from Chile at TheWorld.org.

In the past, she says, you could buy a half stick of butter if you didn’t have enough money, and just pay half-price.

“Why can’t we go back to the old times?” she said.

José Moller took that question seriously. The Chilean student protester turned social entrepreneur decided to build a simple vending machine made out of wood that sells small amounts of powdered detergent at a 40 percent discount.

Moller says he’s able to keep costs down because he buys in bulk and there’s no marketing. There’s no packaging, either.

To demonstrate, Moller drops three coins (each worth about 25 cents) into the “Algramo” machine. It pours 200 grams of detergent into a reusable cup – enough for four loads of laundry.

Moller says this kind of machine wouldn’t mean much for a family living on a middle-class income.

“But for the poorest families in the country, the ones we’re trying to help, it can have a significant impact," he said.

The vending machine is set up outside a local mini-market called Berosh in Huechuraba. The owner, Patricia Sagredo, who lives in the back, gets a cut of the sales. She says the machine has doubled her profit margin on detergent.

Sagredo says she’s pleased that the machine helps out the neighbourhood. She remembers what it was like to scramble to buy basics.

“Now, thank God, I have my store here, but I feel for the families that really are in need," she said.

Moller is considering bringing more discounted products like rice, lentils and sugar to Huerchuraba. But not every product lends itself to vending machine sales, Moller points out. There has to be a steep gap between the shelf and factory price; otherwise, you can’t sell for much less than the name brand.

“We’re looking at making a machine that sells oil and liquid soap,” he said.

Moller is building on the original idea with the help of a $60,000 grant from a social entrepreneurship competition called Desafio Clave. He hopes to have 100 machines in Huechuraba’s mini-markets by November. Ultimately he’d like to expand into other countries.

During a two-week trial period in November, the three machines in Huechuraba got a lot of action. Baez says it sold out of detergent in a week, so she’s pleased to see the machines coming back.

“It lets you save a few pesos for the bus or to buy a few things,” she said.

Saving about 15 cents a load won’t pull Baez out of poverty, but it could help a neighborhood where every peso counts.