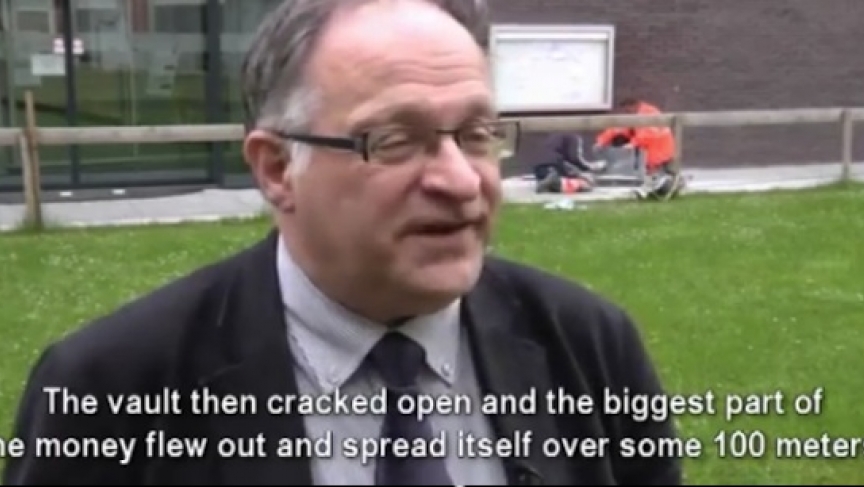 You hear tires screeching. Then a car driven by the suspects in a botched bank robbery races by…the police in hot pursuit.

Suddenly you see the robbers toss something out the window as they speed away from authorities.

It's paper, flying every which way. A money shower of 500 euro notes to be exact.

So that's what happened recently in a town called Zedelgem in a region called Flanders not to far from the North Sea.

More than a million dollars worth of euros flew out of a car.

What would you do?

Some locals there grabbed up the money and pocketed it. Others quickly turned it over to police.

So for our Geo Quiz we want you to guess where this incident happened? Name the country if you can.

What would you do? Pick it up and pocket it? Go out on the town and spend it fast? Or maybe turn it in to the police like you're supposed to do?

In any case, let's get the answer to the question: how much of the cash has been recovered?

"For the moment we have about half of the money back," Zedelgem Mayor Patrick Arnou said. "The police officers at the moment could find about 450,000 euros which was still in the safe or lying in the neighborhood of the safe, and then they could also take money from people which were still there, and now since then we have recovered 62,000 euros, so that makes a big half of the money is back, but there's still some 450,000 euros missing."

As for Zedelgem – well it must be located somewhere in the European Union since it was euros that were tossed by the robbers.

Zedelgem is in the province of West Flanders not far from the North Sea … in Belgium.

It may not be easy to recover the outstanding half of the loot.

"It's a criminal offense to keep the money, so I was a little bit afraid that people who had taken money wouldn't dare to give it back to the police because when you wait some days police will be saying you haven't brought it back immediately so I wouldn't like that people don't bring it back because they are afraid to do so I have said you can bring it back anonymously to me and then I will forward it to the police," Arnou said.

The mayor's scheme does involve a lot of euros changing hands. But the mayor says he'll give out official receipts.

"I give them a proof that they have given back the money to me so when some of the neighborhood says I've seen that one also take money…the money I have collected this way I will give it back to the police," Arnou said.

All of this cash flying around has been a bit much for the town of Zedelgem. The mayor says everyone's buzzing about the issue and asking moral questions.

"It's a big issue and people are totally confronted between them on that issue," Arnou said. "One say you have to bring it back its not your money, other people have worked for it. But other ones say no and you have one million euro and you're very rich so you can take money."

The mayor added that the people in town who aren't talking about the issue so much may be the ones who pocketed the cash. And he says he worries about all the suspicions.

"When you are buying a car in the next month and you are living in that street, everyone will look at you and say its from the money that you have collected from the robbery," Arnou said.

What would you do ? Keep the cash and risk a two year jail term or turn it in? Add your thoughts in the comments below.

We hear from a few of you via our Geo Quiz texting game.

Sarah from Rockville, MD says she "wouldn't touch that money … Its involved in a crime."

Mike from Pasadena, CA says he'd "fix the US deficit and then retire to Sri Lanka."

Jeanne from Foxboro, MA says "Give it back it's not yours!"

Scott from Boise, ID says he'd "take some to an orphanage."

Susan from Denton TX says she'd "Gather and return it. What goes around comes around."

and Kelly from Santa Barbara, CA says "Try to record a description of the getaway car. Stay out of the roadway to avoid police activity."