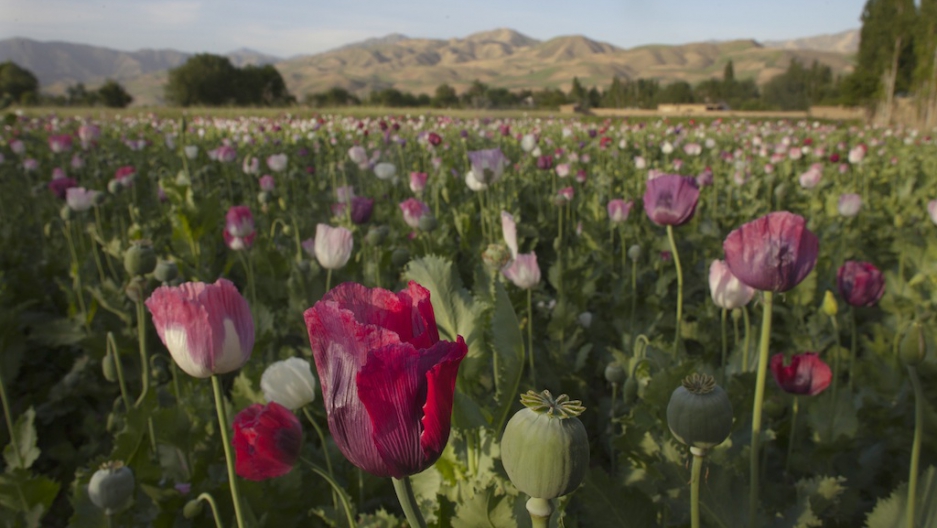 Poppy plants in bloom in a field in Faizabad, Badakshan, Afghanistan in 2011. Today, in a district near Faizabad, the Afghan government is locked in a stalemate with Taliban insurgents.
Credit: Paula Bronstein
Share

FAIZABAD, Afghanistan — More than a year after the Taliban issued a set of demands for the Afghan government in northeast Afghanistan's Warduj district, this once-peaceful area is now wracked by violence.

Back then, a page of lined paper with neat, blue handwriting was passed on to the local representatives of a national peace initiative and signed by the local Taliban leader, Qari Fasihuddin. If Islamic scholars could prove that a “jihad” against “the infidels” was not a religious obligation, the fight against NATO would stop, the note said.

Insurgents would leave alone members of the national army and police, whom assumed security responsibilities in this area from NATO last year, if they agreed to a truce. If these terms were not accepted, security should be handed over to the insurgents and all Taliban prisoners from Badakhshan, the province to which Warduj belongs, released.

But now, dialogue with the fighters has given way to an escalating conflict that has taken dozens of lives and at one stage displaced hundreds in a strategically important province where violence was scarce, and where the origins and motives of the insurgency are unclear.

“They had some conditions and these conditions were not accepted,” the chairman of the High Peace Council in Badakhshan, Qazi Sadullah Abu Aman, said of the Taliban in Warduj district. “Therefore, they were encouraged to fight.”

Like the majority of Afghans interviewed for this article, Abu Aman spoke to GlobalPost in the provincial capital, Faizabad, northwest of Warduj. But the peace council member met with 12 insurgents in Warduj district months before the letter outlining their demands was written as part of a negotiation team to end the discord.

The tension in Warduj reached a boiling point in March when Taliban rebels ambushed and kidnapped Afghan soldiers on a resupply mission. Insurgents are then reported to have executed 16 of the captives.

Soon after, the Afghan government launched a major offensive in the area and that included NATO air support. The government claims scores of Taliban were killed, and that the situation is now improving — with the militants on the run and confined to local mountain hideouts.

But Wahiduddin Arghon, who runs the Badakhshan office of the Afghanistan Independent Human Rights Commission, visited Warduj in mid-March to witness the impact of the operation first-hand.

He told GlobalPost that more than 200 people had fled to the district center due to the unrest. The government offered them basic assistance like blankets, tents and food — but on the condition they agreed to move to a neighboring district.

When the refugees insisted they wanted to return to their own villages, officials “decided that if they give them these materials maybe they would hand them over to the enemies” and the aid was withheld, Arghon said. An Afghan official told him residents had been going to the Taliban rather than the government to solve any community disputes.

But when the Taliban ruled Afghanistan from 1996 to 2001, Warduj was among large parts of Badakshan province that stayed out of their reach.

Badakhshan province — the majority of which remains relatively calm — shares borders with Tajikistan, Pakistan and China, making it strategically and economically important.

The mountains and caves of Warduj are a traditional stronghold of Jamiat-e Islami, one of the main parties in the anti-Soviet resistance and a key contributor to the Northern Alliance movement that fought the Taliban regime.

Opponents of the Taliban today claim the problems in Warduj are actually linked to a construction project designed to connect Faizabad to China via a paved highway. This would open up a lucrative new trade route and has caused speculation that the militants, backed by Pakistan, are trying to undermine the work.

But others say disillusionment with the local government is believed to be a factor behind the insurgency here.

More from GlobalPost: Afghanistan: For ex-Taliban, it's peace or death

“Poverty, injustice, oppression and corruption have caused people to rise up [and join the Taliban],” Abu Aman said.

“If [the government] had dealt with this through the window of peace there would be no issue,” he said. “But they are always doing operations and the operations are all failures.”

Abu Aman claims Fasihuddin — a young, ethnic Tajik believed to be the Taliban’s shadow governor for the province — first took up arms because local security forces were harassing religious scholars.

Fasihuddin’s brother, Mawlawi Mohammad Amin, was killed by foreign troops last year. One rumor circulating here is that the troops then let dogs tear the body to pieces, angering him further.

Indeed, many people in Badakshan say former policemen from Warduj district have joined the insurgency because of the local police chief’s allegedly abusive behavior against both junior officers and the local population.

Mawlawi Fazlullah Hanif is a former member of the Taliban now involved in dialogue with the insurgents here. Last year he also visited Fasihuddin for talks, but he believes the government has still not showed it is serious about negotiations.

"There was war in Warduj and just the district police used 30,000 bullets,” he said. "How can peace rise among us?"