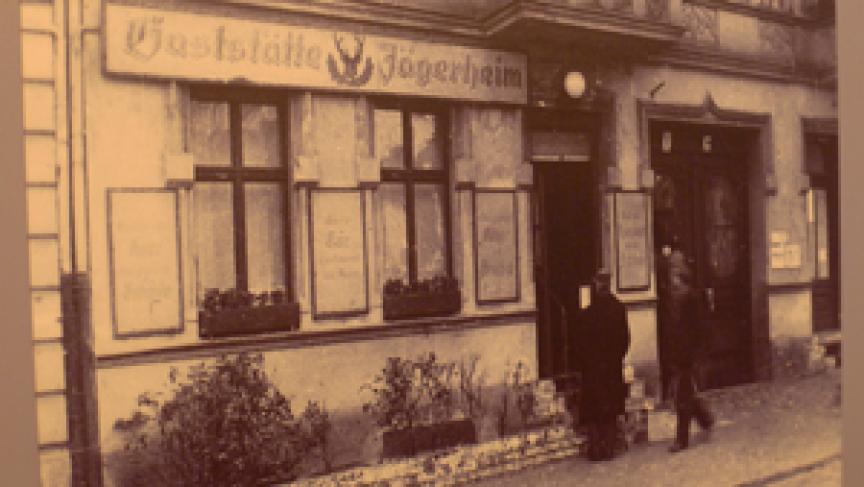 Researchers with access to a vast, and formerly sealed, Nazi archive have learned that in 1933 Berlin there were at least 220 "terror sites," or places where the SA and SS tortured, killed and enslaved opponents. This photo, at the Koepenick Prison memorial, shows one site, a restaurant, inside which the paramilitaries persecuted Nazi enemies.

Share
In the build up to World War II it seems the Nazis were much busier sowing terror than we knew. New research has uncovered a network of tens of thousands of ghettos, camps, and torture sites, many previously unknown and located in major cities such as Berlin. The findings shed light on the scope of Nazi crimes — and raise questions about local complicity with them. Everyone knows Auschwitz. The Warsaw Ghetto. But few people, not even ordinary Germans, know what took place in 1933 on a street in Berlin called Petersburgerstrasse, number 86. But this was once a well-known fascist café called Keglerheim. On a recent afternoon Amelie Artmann, a German researcher, read out loud an inconspicuous plaque hung on the side of the building here, in Berlin's Friedrichshain neighborhood. "It turned into a murderous cellar in 1933," she said. "Hundreds from Friedrichshain were tortured and murdered in this place." Murdered by the Nazi's first paramilitary organization, known by its initials as the SA. The SA carried out torture of political opponents, Jews and others in the basement of this facility, just when the Nazis came to power, in 1933. Historians like Artman know this spot. What they didn't know until recently: That there were hundreds more like it in Berlin alone at the dawn of the Third Reich. A team of investigators has now located and marked 220 such terror sites in the city. Artman takes me on a tour of a handful of previously unknown torture facilities, makeshift prisons, sweatshops, brothels. On one street two torture sites stood only a couple of blocks apart. Today one is a Vietnamese take-out joint. The other is a French restaurant. The owner of this eatery, Francois, said all he knew was that some years ago this place was a club for sado-masochists. A restaurant owner in the dark is one thing. But even historians didn't learn about many of these sites until recently. They were only discovered when a vast and secretive archive of Nazi records, known as the International Tracing Service, or ITS, was finally opened to the public in 2008, under pressure from Jewish groups and scholars from around the world. The ITS was founded after WWII to help millions of people displaced by the fighting. Stefan Hoerdler, with the German Historical Institute in Washington DC, said the documents were used for humanitarian, not historical, purposes. "Just to help survivors prove they were prisoners of certain camps and ghettos," he said in a phone interview. That proof allowed them to get compensation from the West German government. The German bureaucrats running the ITS also argued that opening the files would have violated strict privacy laws. Among the millions of meticulously kept Nazi records are the names of concentration camp victims, prisoners of war, execution dates, and Hoerdler said, even detailed information about who worked in the camps. He said what he's found most striking about the trove of data isn't the scope of the Nazi system, but what it implies about the larger German society at the time. To run this big system of camps and ghettos, he said, you needed much more people to supply and support the system. "Food, clothes, furniture, everything had to be produced," he said. "And the whole society was involved in this process. There was no real neutral position of bystander." The researcher Artman said the old argument among war-era Germans that they didn't know what the Nazis were up to doesn't hold up, at least not for residents of big cities such as Berlin or Hamburg. And it isn't just the density of terror sites that reinforces that belief. Case in point: a former prison in the Koepenick neighborhood of Berlin. It was the site of the worst violence in Berlin in '33. A total of 24 people were killed here, and around Koepenick, over a five-day period in June. It's known as the Week of Blood. Through the ITS records, historians are learning that many of the killings that week and at other times were carried out by neighbors, people who knew each other. Sometimes there were personal vendettas. Sometimes it was about social class. Stefan Hoerdler said the motives were as complex as the network itself — a network that served as a model for even more sinister work later on. "I think the early plan of detention centers in 1933 was the ground for experiments," he said, "and the ground to take the knowledge for building up the more structured and organized camp system." Concentration camps, that is. The Koepenick Prison has been turned into a museum, and later this year will open a big exhibition to commemorate the 80th anniversary of the Week of Blood, and the Nazi rise to power.