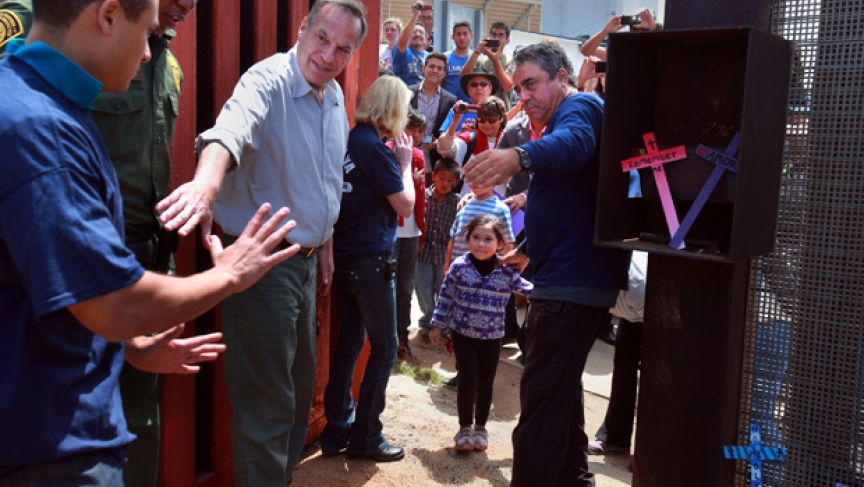 For decades, loved ones separated by the U.S.-Mexico border have met at Friendship Park. Jimena Angulo, 5, meets her father, Luis, for the first time, at a ceremonial opening of the border gate.

The US-Mexico border starts on a bluff overlooking the Pacific, half of it in Tijuana and half in San Diego, California. A 17-foot metal fence splits this place in two; on the Mexico side, there’s a paved city plaza behind the bullring, and on the US side, a no-man’s land patrolled by border guards.

But on weekends, the two sides are reunited, a place where families separated by immigration status can spend time together, at least on either side of the barrier.

Jimena Angulo, 5, has never met her father. She was born in Tijuana; her father, Luis, is a US citizen, but he has legal problems, so for now he can’t travel to Mexico. They’re meeting today for the first time – on opposite sides of the fence.

“A friend of mine told me you can come to this park to see your family. Far, but you can see them,” says Luis.

Families separated by the border have been meeting here for decades, since the fence was just a strand of barbed wire leading out toward the beach. First Lady Pat Nixon inaugurated the park in 1971, saying she would “hate to see a fence” between the two countries. The US built the first real wall in the 1990s to stop illegal immigration at the border’s western edge. In 2009, a second fence behind the first one penned off the US side.

It’s not a very welcoming place.

“There’s this ugly wall. It shows like, a disunity, like you’re alien,” says Juan Carlos Rodriguez Montes, who was brought to the US illegally as a child. He was deported to Mexico in 2011, but his family is still in California.

“One of my older sisters is not allowed to cross until she fixes certain things on her immigration status, and this would be the place where I get to see her in person,” he says.

Actually, it’s hard to see anything through the fence. On the US side, it’s reinforced with a thick steel mesh. From a few feet away, the wall looks solid. When you get close up, you can just barely make out people’s faces through the holes.

Jimena slips two little fingers through, and on the other side, her father grasps them with his hands.

“What pretty hands you have,” Luis says. “I love you, princess.”

“This park is to me the heart and soul of the whole immigration issue,” says Enrique Morones, a border activist who won Mexico’s National Human Rights Prize in 2009. He calls the park a “sacred place” for divided families, but he hopes someday they’ll be able to meet without a fence between them – “because friendship and love have no borders.”The border divides family members for all kinds of reasons. Some are undocumented. Some have been deported. A University of Arizona study found that half of all deportees leave behind family in the US. Others, like Luis and Jimena, just get stuck in the tangles of bureaucracy and their own complicated lives.

On this day, there’s a special event at the park, celebrating Mexico’s Children’s Day with music and toys. For the first time, US border officers are opening the gate in the fence, a symbolic gesture of friendship. The gate was rusted shut, so before the event, they had to loosen it up with a blowtorch.

Luis Angulo walks right up to the border line. The guards have given permission for Jimena to come to him, just while the gate is open. Luis scoops her up for a hug, their first ever. She wraps her arms around his neck. People surrounding them applaud.

“I feel her little heart, you know?” says Luis. “It was really a sign for me, like a miracle.”

But two minutes later, the gate closes again, and the miracle is over.

Jimena’s grandfather Jose Luis, who brought her to the park, says “the US has an obligation to reunite children with their parents.” He hopes immigration reform will pave the way.

Many divided families hope reform could help bring them together, by creating a path to legal status in the US, reconsidering some deportations, and easing family visas.

Some of those who now meet at Friendship Park could be reunited, on the same side of the fence. But until then, they have this place, where Jimena can touch her father’s hands.