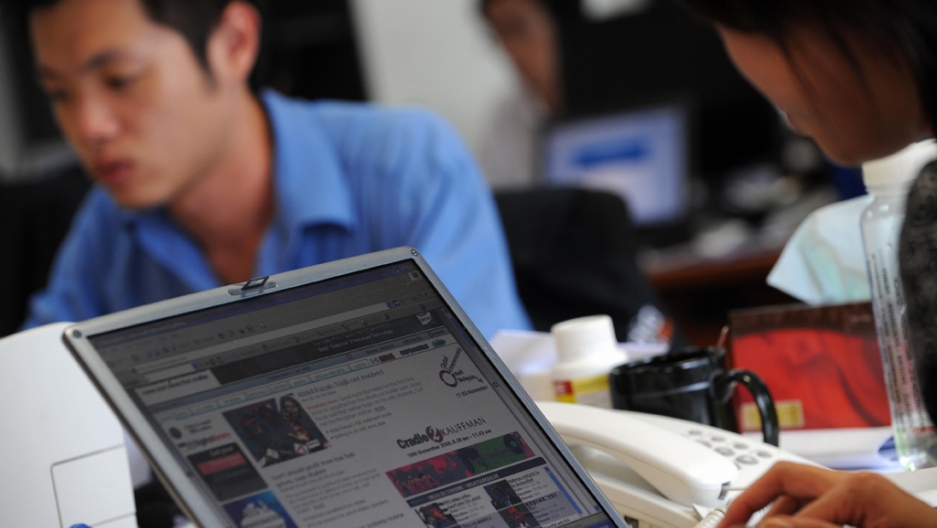 KUALA LUMPUR, Malaysia — As Malaysia gears up for its most tenaciously fought election in more than five decades, the internet is emerging as a new political battleground.

This week, a number of online news websites — often critical of the government — and several websites of opposition candidates, including that of opposition leader Anwar Ibrahim, were the subject of strategic cyberattacks.

In a country where traditional media is predominantly state-owned, the online sites play an important role in providing Malaysians with an independent voice.

“I didn’t take mine down in time, so they actually managed to take a screen capture of it and put it up on a cyber troopers blog where they post all sorts of slanderous stories,” says political analyst Tricia Yeoh, whose personal website was also hacked.

Access to Malaysiakini, a popular online news site that consistently publishes stories about alleged government corruption and fraudulent voting, has also been intermittently disrupted over the past week.

The cause of the disruptions — whether they are due to interference from internet service providers or other actors — remains unclear.

Three London-based web portals, Radio Free Malaysia, Radio Free Sarawak, and the Sarawak Report were also brought down early last month. That attack, emanating from computers around the world, generated over 130 million hits on the three websites in less than four hours to overwhelm their servers.

Yeoh says the attacks have fueled concern about popular sites being compromised on voting day, which is May 5.

When Prime Minister Najib Razak’s ruling coalition Barisan National (BN) lost five out of 13 states to the opposition in the 2008 election, only the results that favored the incumbent were announced immediately on TV.

“That result only came out on the alternative news sites online first. It took a while to come out on national TV for obvious reasons, so we don’t want a repeat of that to happen,” says Yeoh.

In a statement released this week, Human Rights Watch (HRW) urged the Malaysian government to investigate and shut down all cyber attacks.

“Ensuring everyone can access information without interference is critical if there is to be a level political playing field in Malaysia,” stated HRW deputy Asia director, Phil Robertson.

The online websites are especially popular with young Malaysians, whose votes are crucial to determining which way Sunday’s poll will swing.

Of the 13.3 million registered voters, the highest segment ever — almost a quarter — is under the age of 25, with more than 3 million Malaysians voting for the first time.

Malaysians are also among the highest users of social-networking sites in the region, the proliferation of which has led to an increasingly politicized young constituency, says Malaysiakini editor Steven Gan.

Analysts have even dubbed the imminent poll as Malaysia’s first-ever "social media election."

“The reason why you see a huge push of people wanting to vote is that they got politicized through the information they are getting, especially through the internet,” Robertson says. “They want to make a difference in history.”

Gan says the difference between traditional media and the internet media in Malaysia “is like heaven and earth.” And while he concedes there are limitations to online news, particularly in rural areas where broadband penetration is low, online coverage has helped open up the eyes of Malaysia’s youth.

Many issues that don’t pass the government censors are reported online, he says.

A murky scandal involving the $2 billion dollar purchase of French submarines that led to the murder of Mongolian model and translator, Altantuya Shaariibuu, for example, are subject to virtual blackouts in the state press.

Despite the scales-of-justice motif plastered on the ruling coalition’s ubiquitous campaign flags, young Malaysians like 34-year-old Vincent Qwan say they are skeptical about BN’s continued reign.

“I look forward to a change of government,” he says in the key swing state of Lambah Pantai on Friday morning. “I just want the police to work as police, a judge to work as a judge, just to serve as what they are meant to be.”

Qwan says young Malaysians have only ever known one government, which has ruled since independence from Britain in 1957, and are fed up with rising living costs, media bias and allegations of rampant corruption.

A report released by the Washington-based Global Financial Integrity showed that about 200 billion Malaysian ringgit ($65 billion) in questionable money was siphoned out of Malaysia in 2010, second only to China in terms of global capital flight.

Campaigning on the promise of stability and sustained economic growth, the ruling party has also been ramping up its presence on sites such as YouTube and Facebook, launching a live stream of its press briefings and spending heavily on advertising.

While a recent Merdeka poll showed that voters ages 21 to 30 were those most unhappy with the prime minister's performance, the government is confident they have the country’s youth on their side.

“I personally think the youth in this incoming election will consider wisely to vote for the government,” says Khairun Aseh, who heads the youth wing of the United Malays National Organization, a dominant party in the BN coalition.

Aseh says Malaysian youth enjoy a lot of freedoms and have been the recipients of numerous government assistance programs.

Most pollsters say it is still an uphill battle for Anwar and his Pakatan Rakyat coalition to win. But it’s an outcome Vincent Qwan still wants to see.

Asked if the opposition could do a better job at running the country, Qwan laughs.

"Well, they couldn’t be any worse.”