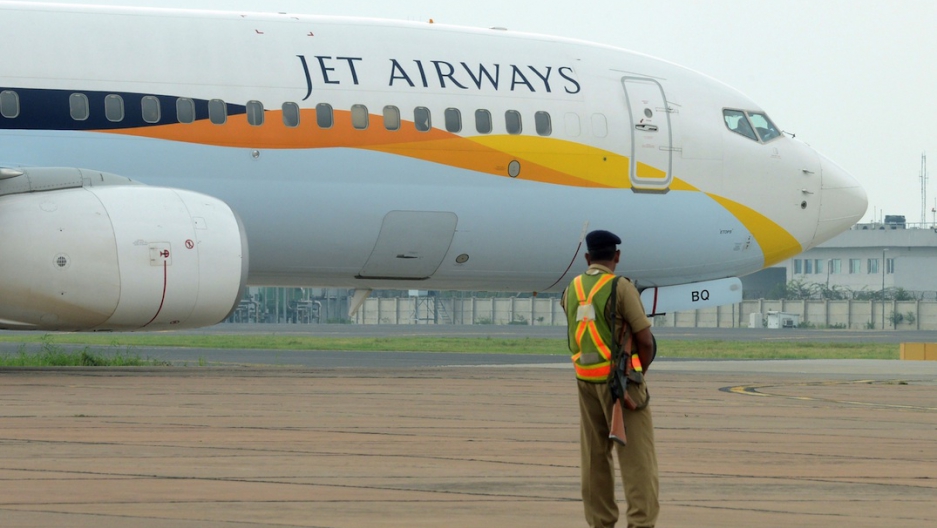 An Indian security official looks on as an aircraft of Jet Airways taxies after landing in New Delhi. A Jet Airways Airbus A330-200 carrying 300 guests of the wealthy Gupta family landed at South Africa's main military base earlier this week, sparking an uproar over the family's ties to the South African president.
Credit: RAVEENDRAN
Share

JOHANNESBURG, South Africa — The South African government is investigating why a passenger plane from India, carrying 300 wedding guests of a wealthy family with close ties to President Jacob Zuma, was allowed to land at the country’s main military air base.

It is still unclear how the plane was able to land without the normal aircraft permits and without any customs officials present. But the special treatment for the Gupta family, whose links to Zuma have been criticized before, has caused an uproar in South Africa.

The Airbus A330-200, chartered from India’s Jet Airways, arrived at the high-security Waterkloof Air Base in Pretoria on Wednesday. Guests were then whisked away in luxury vehicles with a VIP escort to a casino resort booked entirely for the dream wedding of niece Vega Gupta, 23, to Aakash Jahajgarhia, the son of a wealthy Indian family.

There are accusations that the High Commission of India — the equivalent of an embassy in Commonwealth countries — abused diplomatic privileges and helped facilitate the landing at Waterkloof, which normally serves the president, military, and visiting heads of state.

South Africa’s chief of state protocol, Ambassador Bruce Koloane, has been suspended by the Department of International Relations as part of its investigation.

A group of senior South African cabinet ministers on Friday held a briefing to announce that four high-ranking military and police officials had also been placed on "compulsory special leave."

Justice minister Jeff Radebe vowed that the government would "hold all those responsible for bringing our country into disrepute, whoever they are and whatever position they hold."

"Our particular concern is that the aircraft was carrying international passengers who do not fit the category of government officials or VIPs on official duty," Radebe said.

Also under investigation is the convoy that took the Indian wedding guests from the air base to the Sun City resort. Radebe said the black BMWs fitted with emergency lights were not a police escort, as originally thought, but rather hired privately from a security firm that has moonlighting police officers on staff.

Meanwhile, upon instruction from the South African defense minister, the Gupta's plane has been removed from the Waterkloof base and flown to Johannesburg's main OR Tambo International Airport.

The Gupta family said in a statement Thursday that it “was not directly involved in the Waterkloof incident,” and insisted the Indian High Commission had obtained permission for the plane to land.

The family has booked the entire five-star Palace of the Lost City hotel, at the Sun City casino and resort complex about 90 miles from Waterkloof, for the Hindu wedding from May 1 to 4.

"We have been saddened by the ongoing negative reporting surrounding the wedding,” the family statement said.

“Our genuine attempts to do everything to give Vega and Aakash a dream wedding have led to a slew of negative reports.”

The Guptas, originally from Saharanpur in northern India, began doing business in South Africa in 1993. The family is led by three brothers and owns technology firm Sahara Computers, as well as The New Age, a pro-Zuma daily newspaper.

One of Zuma’s sons, Duduzane, has been involved in business interests with Rajesh Gupta, and was appointed to the board of Sahara Holdings, the Gupta’s investment company.

In 2011, there were widespread reports of disquiet within the ANC and its political alliance partners that the Gupta family was too close to Zuma, and had too much influence in the appointments of top government officials.

Susan Booysen, a political scientist at Johannesburg’s University of the Witwatersrand, said the South African public knows the Guptas are close to Zuma and his family, and have a big influence in government.

The fact that a private plane filled with Gupta wedding guests was allowed to land on a military airfield is “indefensible,” Booysen said.

“It’s another example of confusion between party, state and individual,” she said. “I would suspect at the moment there is a major operation on how to keep the president out of it.”

President Zuma’s office refused to comment on the incident, which is being called “Guptagate” in the South African media.

But the ANC and its alliance partners, the South African Communist Party (SACP) and trade union federation Cosatu, have all called for heads to roll.

Gwede Mantashe, secretary general of the ANC, demanded an explanation as to who granted permission for the plane to land, and on what basis.

“The African National Congress will never rest where there is any indication that all and sundry may be permitted to undermine the Republic, its citizens and its borders,” he said in an emailed statement.

Jeremy Cronin, deputy general secretary of the SACP, said his party was "deeply embarrassed" over the incident.

"We are not living in a banana republic. We are not a playground for rich foreigners to come and occupy our space, to come and take over a national key point," Cronin told workers at a rally in Durban.

Terror Lekota, a former ANC defense minister who is now part of the opposition, accused Zuma of running South Africa as a "personal fiefdom" with perks for his powerful friends.

“It almost seems like the Gupta plane landed on Mars,” Booysen said. “Suddenly nobody knows them.”