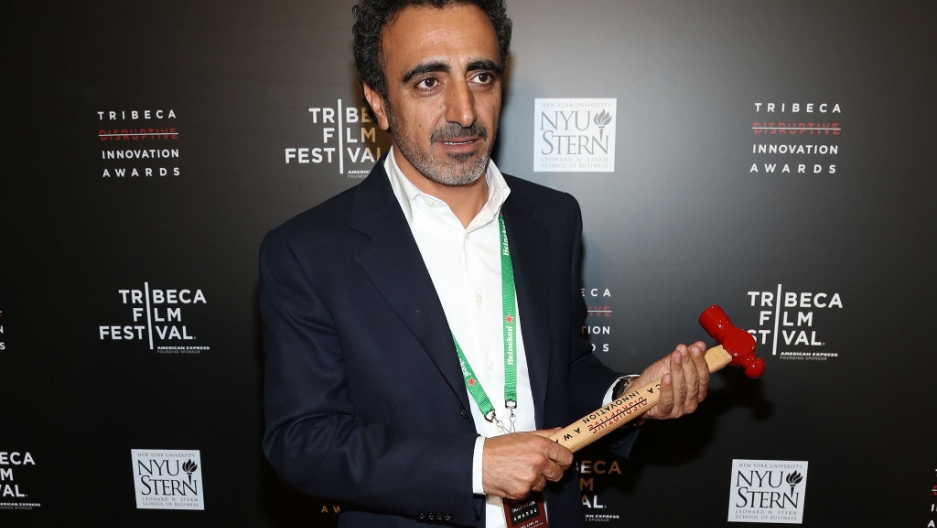 Chobani Yogurt has been one of the most explosive food start-ups to ever hit the market.

The company's now infamous Greek yogurt is netting more than $1 billion in annual sales — and it only went to market five years ago.

But Chobani's CEO and founder, Hamdi Ulukaya said the company's instant success wasn't all about the product.

"Chobani is not a yogurt story," he said. "It’s a manufacturing story."

Ulukaya gave a presentation earlier this week to a packed audience at New York University's Stern School of Business, sponsored by the Berkley Center for Entrepreneurship & Innovation. In it, he outlined the story of the company's rapid growth.

Ulukaya scraped together funding to buy an old yogurt plant in upstate New York in 2005, with help from a Small Business Administration Loan. He didn't have any concrete plans, and the place wasn't in good shape — with water dripping from the ceiling and paint peeling for the walls. But when he got the idea to start making Greek yogurt in the U.S., the company fixed the factory up and ran with it, and Ulukaya said he practially lived in the plant for five years to get Chobani off the ground.

"I knew that something could be done with yogurt because growing up in Turkey, we knew what to expect from yogurt," he said at NYU.

Chobani was an instant success when it hit shelves in 2007, with orders consistently increasing. Ulukaya soon had big yogurt companies, like Dannon, knocking at his door, asking him to sell. He also could have turned to private equity companies for funding. Those strategies are typically the most appealing to food start-ups, Ulukaya said, because if they don't, the larger companies imitate it and use their large manufacturing bases to get it to the masses.

But he decided not to sell, and that's when Chobani's focus turned to expansion — and fast.

"No start-up has done it any other way, so I wanted to do it in another way," Ulukaya said. "I bet on these guys being lazy, that they’re not going to wake up that fast, and I said, 'I'm going to be fast.'"

And fast it was. Ulukaya didn't outsource anything — keeping control of the yogurt from its production in the factories to the time it hit shelves. The company built a big warehouse across the street from the plant in two months, and soon after built another huge plant in Idaho, which went up in just a year.

He also bet on the product being successful and priced it based on what it would cost in the future if sales increased, instead of factoring in the high input costs that the company had to face at the onset. (The yogurt goes for about $1 per cup.)

The strategy worked. The company now produces 2.2 million cases of yogurt a week, Ulukaya said, and has passed $1 billion in sales. When they started, Greek yogurt made up 0.2% of the yogurt market in the U.S. Now it makes up 50%, and Chobani has at least half of that market share, he said.

It's been a huge shock to the yogurt sector, which had been dominated by two or three big companies for decades prior and mostly pumped out products that were high in sugar, coloring and preservatives, Ulukaya said. And the majority of the money to fund Chobani's new plants, employees and warehouses was internally generated.

Ulukaya also prides the company's success on its small-town roots and dedicated employees, who he said didn't have a holiday off for the first five years.

"Never has a food aisle been challenged like this and changed so quickly by a startup ever," Chobani said. "Some say we’re the fastest growing startup ever, including technology."

Business Insider: Dear America: Here's why we have to reform the immigration system

Business Insider: How a startup with no revenue can be worth a billion dollars