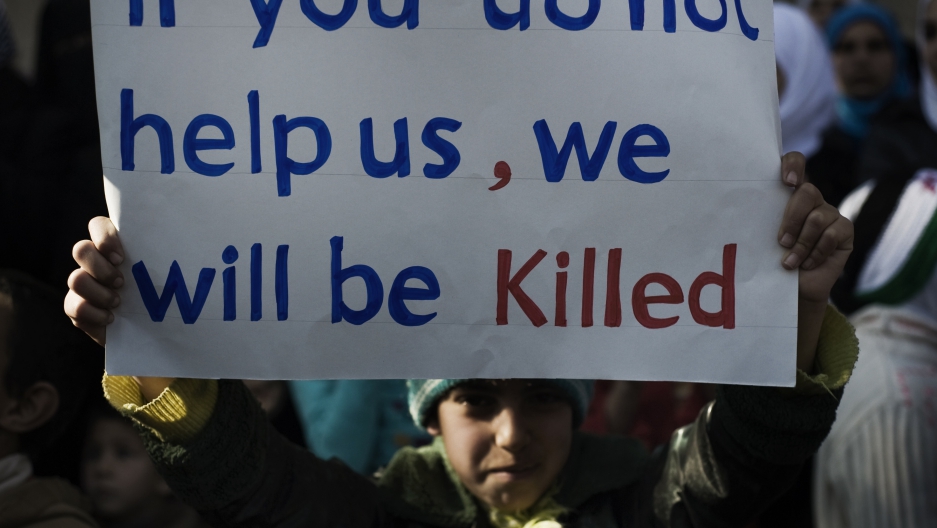 An anti-regime demonstration in the Syrian village of al-Qsair, 20 miles southwest of the flashpoint city Homs.
Credit: Alessio Romenzi
Share

Syrian activists said government troops pounded the rebel-held city of Homs on Thursday in an effort to reclaim the country's third-largest city, according to the Associated Press.

Meanwhile, in the country's north, rebels reported a success over regime headquarters in Aleppo, said AP.

The war between forces loyal to Syrian President Bashar al-Assad and anti-government rebels has become a humanitarian catastrophe, having claimed the lives of an estimated 70,000 people in Syria over the past several years. International efforts to resolve the crisis have so far been unsuccessful.

US Defense Secretary Chuck Hagel said on Thursday afternoon that the Obama administration was rethinking its opposition to arming Syria rebels fighting against the regime.

During a news conference, Hagel said the administration was looking at its options.

"Arming the rebels — that's an option," Hagel said, according to the AP. "We must continue to look at options."

Up until now, Washington's response has been big on pro-opposition rhetoric (see Friends of Syria) but small in terms of actual military support. This may be changing, however, given mounting evidence of the use of chemical weapons there -- news Obama earlier warned would cross a "red line."

The US president is said to be rethinking the issue after initially overruling the Pentagon's move to arm the opposition over concerns about potential extremists within Syria's diverse anti-government movement.

One US official told AP on Thursday that recent developments prompted some "reconsideration" on the matter, but it remains to be seen what that might be.

"The suburbs of Homs today are under a greater threat than ever before," the group said in a statement cited by CNN, adding: "Every decision maker and leader capable of helping us will be judged by God, people, and history."

The Syrian cities of Homs and Aleppo, both militarily strategic locations, have been at the forefront of the fight between the rebels and the regime in recent months.

The Christian Science Monitor said Homs is known as the "beating heart of the revolution."

Here's a Thursday video report from CNN on Syria: