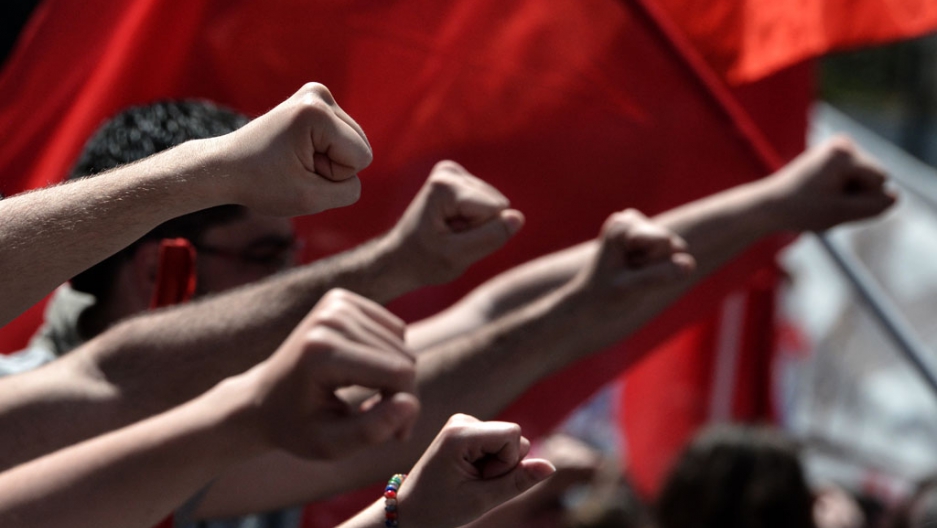 Demonstrators raise their fists during a demonstration on May 1, 2013. A strike stopped ferry services to the Greek islands and disrupted public transport in the capital Athens ahead of May Day protests Wednesday against Greece's prolonged economic austerity policies.
Credit: ARIS MESSINIS
Share

BRUSSELS, Belgium — Four years into the euro zone's debt crisis there was anger but also resignation at the traditional May Day (International Workers' Day) labor protests and rallies around Europe.

Greece — Wednesday was marked by the 20th one-day strike in Greece since the start of the crisis. Protest organizers called for an end to spending cuts and tax increases.

Trade unions called for "mass mobilization" of protesters, as a general strike shut down ferry services and transportation, and left hospitals with reduced staff.

Despite the familiar burnings of EU flags and parading of Angela Merkel's portrait defaced with Hitler moustaches, the demonstration in Athens went of peacefully. The lower-than-usual numbers were down to the Orthodox Easter holiday, but also "protest fatigue."

Last Sunday, Greek parliament passed a bill that would lead to public-sector layoffs and other austerity measures, in exchange for the next installment of international aid, totaling 8.8 billion euros ($11.5 billion).

The terms, set by the European Union and International Monetary Fund, will allow the dismissal of 15,000 civil servants.

The EU and IMF have committed a total of 240 billion euros ($317 billion) to Greece since 2010. The country is now in its sixth year of recession.

France — In Paris, Socialist President Francois Hollande was the target for many protesters, reflecting disappointment with his administration which came to power a year ago.

Spain — Protesters in Madrid carried signs that read, "austerity ruins and kills" and "reforms are robbery," as police braced for a repeat of last year's clashes.

Unemployment in Spain is equally grim, standing at a staggering 27 percent.

Turkey — Conversely Turkey, a country whose economic growth is the envy of most European Union countries, saw the day's most violent protests. At least 12 people were injured as police used water cannon and tear gas against marchers trying to enter the landmark Taksim square.

"Turkish govt shamed in eyes of world. Hearts and minds of workers will not forget today's oppression," tweeted Sharan Burrow, general secretary of the International Trade Union Confederation who attended the demonstration.

Italy — Not exactly a workers' rally, but the pope's weekly address in St. Peter's Square, Rome also included an call for governments to fight unemployment.

"I think about everyone, not only about young people, who are unemployed often because of an economic conception of society that seeks selfish profit outside the bounds of social justice," Pope Francis told the crowd.

Tens of thousands also marched in Italy to urge government action against unemployment, which stands at 11.5 percent in the country.

Italy recently formed a new government, with a precarious coalition between center-left and center-right parties led by Prime Minister Enrico Letta. The formation of the new government, which will now have to tackle the country's recession and debt, temporarily buoyed the markets.