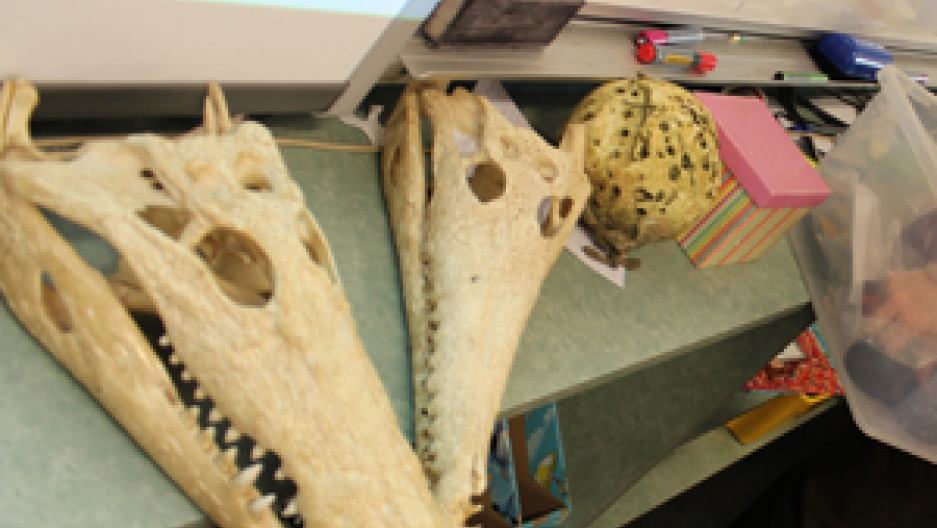 Ranger Jennifer Cunningham of the Northern Territory's Parks and Wildlife Commission prepares for a presentation on crocodile safety at an elementary school in rural Darwin. (Photo: Ari Daniel Shapiro)

The residents of Australia's Northern Territory share their land with one of the deadliest predators on the planet — the saltwater crocodile. Getting humans and these fearsome reptiles to coexist isn't easy. But a government program called "Be Crocwise" is doing its best to keep the peace. Ari Daniel Shapiro of our partner program NOVA reports.

To understand the situation with saltwater crocodiles in Australia today, it helps to know some history.

Grahame Webb, a zoologist who has worked in Northern Australia for four decades, says back in the middle part of the 20th century, crocodiles had no legal protection.

"Nobody cared about crocodiles," he says. "They were just vermin — they were pests."

At that time, the city of Darwin — the capital of Australia's Northern Territory — was a small town. People in the area hunted crocodiles for income.

With so many saltwater crocodiles being killed, the population plummeted. By the 1970s, the animals were in danger of extinction in Australia. So the government banned hunting and the export of crocodile products.

Webb says these measures were implemented to conserve the animals as an economic resource, and not because there was some newfound love of crocodiles. Still, the public did not object to protecting crocodiles.

Webb says it was the equivalent of asking people, "Do you want to protect the unicorns?'" since there were so few of the animals around.

The protection efforts worked so well that there are now just as many crocodiles in and around Darwin as there are people — 100,000 of each, according to Jennifer Cunningham, a ranger with the Parks and Wildlife Commission of Australia's Northern Territory.

"We are living with crocodiles more than ever before," she says. "The population of Darwin has grown. The rural area of Darwin has spread right into crocodile territory."

The danger posed by this overlap between humans and crocodiles became clear in 2009.

An 11-year-old girl named Briony Goodsell was swimming in a rural part of Darwin, in a spot her parents and grandparents had told her was safe, when she was killed by a crocodile. Other people had died before, but the death of this little girl, so close to the population center in this part of Australia, hit residents hard.

An official government report on Goodsell's death described the new state of affairs bluntly: "We must face the reality that dangerous, man-eating animals live amongst us — not just in the Outback but in populated areas of Darwin."

And so the government launched a new effort to help people live safely with crocodiles. It is called "Be Crocwise."

Cunningham recently stood before a room filled with third- and fourth-graders at Humpty Doo Primary School in rural Darwin.

"What I'm here for today is to talk to you about crocodiles and crocodile safety," she told the children.

This school is where Briony Goodsell, the girl killed by a crocodile in 2009, had been a student. But Cunningham gives this same talk in classrooms across the region.

"What I'd like to know," she told the children, "is whether you guys know anything about crocodiles."

One girl replied, "Crocodiles are very dangerous, so you might want to stay away from the water's edge when your parents tell you to, to be safe."

Another child added, "They're dangerous, and they eat people."

Cunningham offered practical safety tips. For instance, crocodiles can hold their breath up to an hour, which means that even if you don't see a crocodile on the surface of the water, there may be one lurking below.

She also warned the students that crocodiles use rivers like highways and can turn up just about anyplace where there is water — including residential backyards, especially in the rainy season.

And yet, not all saltwater crocodiles are protected. The government reserves the right to kill crocodiles it deems a menace.

That is the job of wildlife ranger Tommy Nichols. Throughout Darwin's harbor, he and his team have set up a couple dozen crocodile traps and baited them with large chunks of wild boar.

On a recent morning just after sunrise, he approached one of the traps on his boat.

"There is a small croc in there," he said as it came into view.

The trapped crocodile was about six feet long. Nichols and his team removed the animal from the trap, tied and taped its mouth shut, and prepared to haul it off to a local croc farm, where the animals are killed for their meat and skin.

This crocodile may not have threatened anyone, but Nichols explained that the government policy is to remove all crocodiles from Darwin's residential areas and its harbor.

"Everything in these areas, we take out," Nichols said. "No tolerance. All the crocodiles go because of the recreational use and the amount of people that come down here and utilize this area. So it's to stop interaction between the public and crocodiles."

In truth, no one wants to stop all human interactions with crocodiles. The animals are a huge draw for tourists in the Northern Territory. Visitors pay to go on crocodile river cruises and to tour crocodile parks.

The economy here benefits from having a healthy crocodile population. And for that to continue, zoologist Grahame Webb says, the public needs to feel safe.

"The worst thing that can happen for crocodile conservation is more attacks," he says. "If you think you just can have crocodiles out there eating people and everyone's going to put up with it, well, I got news for you, they're not going to do it."

Webb says the government's program to protect people from saltwater crocodiles is really an effort to protect the crocodiles from people. The idea is to ensure that public opinion does not turn against crocodiles again.

By reducing the likelihood of an attack, and by teaching kids (who will one day be voting adults) to appreciate these animals, the government hopes to guarantee a future for these valuable, yet deadly, creatures.