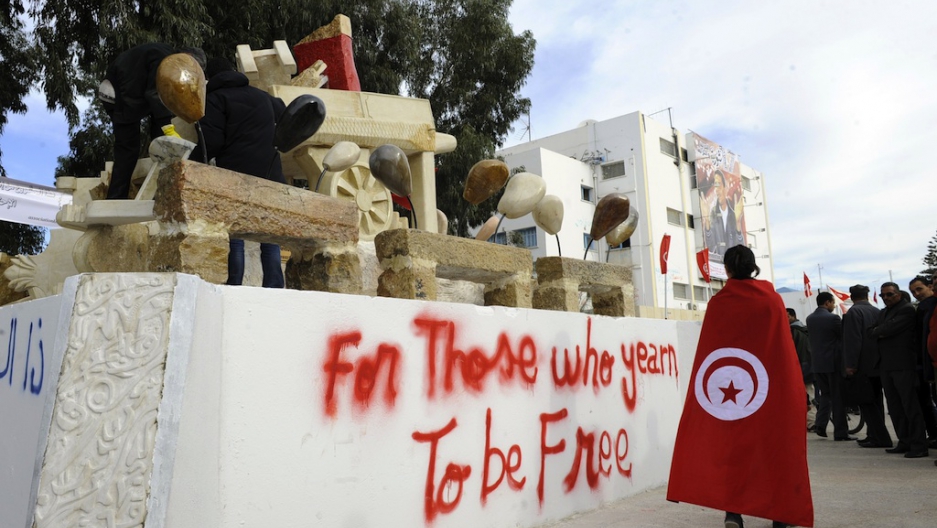 A person caped in the Tunisian flag walks past a statue representing the cart of Mohamed Al Bouazizi, the fruit vendor whose self-immolation sparked the revolution that ousted a dictator and ignited the Arab Spring, on Dec. 17, 2011 in Sidi Bouzid. Thousands of Tunisians rallied in celebration of the first anniversary of the popular uprising that toppled their long-standing dictator and unleashed the Arab Spring revolutions.
Credit: Fethi Belaid
Share

The father of Syrian Ahmad Mahmoud Yousef, who is being hospitalized with third-degree burns after attempting to self-immolate in economic protest in Beirut, told Lebanon's Daily Star that many Syrians feel as despairing as his teenage son.

“We’re tired, we’re out of work, our houses have been destroyed,” Mahmoud Yousef told the Star on Tuesday at Beirut’s Geitawi Hospital, where his 19-year-old son is on life support.

The family of 11 reportedly moved to Lebanon two years ago -- around the time of the initial non-violent uprising against Syrian President Bashar al-Assad.

The government's brutal crackdown on protests saw fierce resistance from armed rebels, however, leading to a war in Syria that the United Nation says has taken over 70,000 lives.

Many families fled in the face of the upheaval and struggle to survive as refugees in neighboring countries.

According to relatives, Ahmad's suicide attempt came after he got into an expensive car accident that cost $4,000 in damages, said the Star.

“We tried to help him when he said he needed money, but we couldn't’t help. We don’t have any money,” his 17-year-old brother Ali told the Star.

Lebanon's National News Agency said Yousef tried to set himself on fire on Sunday in the capital's Corniche al-Mazraa, according to NOW Lebanon.

It was not immediately clear if there was any connection between Yousef's attempt and the 2011 self-immolation of a Tunisian fruit vendor, also done out of economic frustration but which ended up igniting a wave of protest throughout the Arab world.