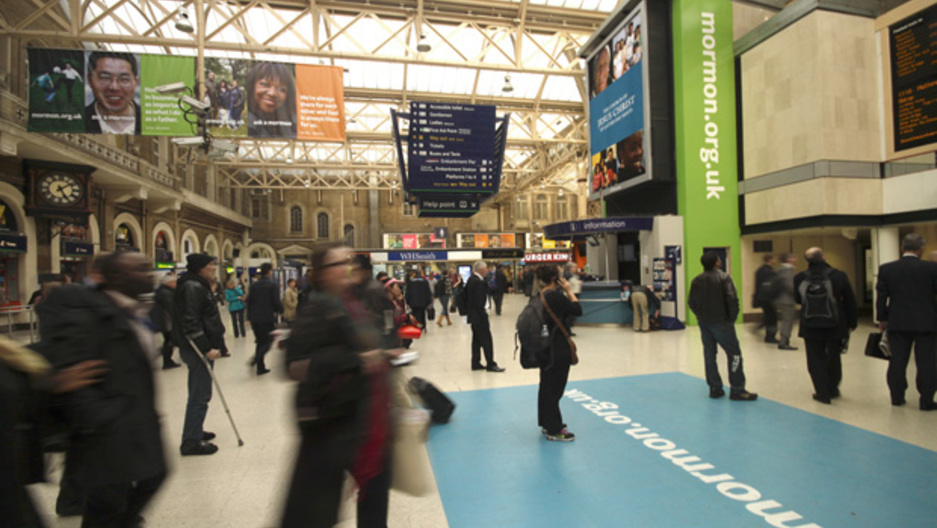 Charing Cross Station in London features several "I am a Mormon" ads from the Church of Jesus Christ of Latter Day Saints. (Photo by Russell Newlove.)

This month the Church of Jesus Christ of Latter Day Saints started an ad campaign of its own — on buses and in tube stations — to promote Mormonism, which doesn’t have a large following in Britain.

At Charing Cross train station, one of London’s busiest, a huge billboard is covered in pictures of friendly, smiling faces with the heading “I’m a Mormon.”

It’s part of a drive by the Church of Jesus Christ of Latter Day Saints to give the British public a chance to get to know its followers better.

“The idea behind it is essentially to correct misinformation about the Church of Jesus Christ of Latter Day Saints. There are a lot of myths out there and stereotypes,” said Malcolm Adcock, a spokesman for the Mormon church in Britain.

Adcock says the recent success of the “Book of the Mormon” musical has led to increased interest in the church here.

There aren’t that many Mormons in Britain, only about 200,000. That’s less than half a percent of the population.

Adcock acknowledges his religion is entering a society that is increasingly secular.

But selling a new product, especially one as complex as a new religion is difficult. Increased awareness might sound like a good thing, but for a lot of people, their first experience of Mormonism is a comedy musical mocking it.

So, is the ad campaign the right approach to capitalise on the supposed surge in interest? Commuters near the station weren't exactly encouraging.

“I thought they were a little bizarre,” another person said. “It’s a little like seeing an advert on the side of a bus for the Catholic faith or the Christian faith. I suppose Mormon faith and way of life is a little less mainstream than the other two, but it’s still a little bizarre to see it. I do think that religion is fairly well set in this country — but I think there’s always room for maneuver.”

So maybe there is an opening. Simon Blackman, who is from Design Space, a marketing strategy company based in London, says the ads are about friendliness.

" 'We're normal people, just like you.' Ask a Mormon, just like you'd ask Google. That's really my first reaction," he said. "It's about a proximity idea of not being different and not being strange, when of course we know what's prompted it is this musical that's portraying them as being strange, obscure, irrational thinkers."

The ads will be up until the end of April. After that, they'll run online. The question is: Will visitors to the church and its website outnumber those who see the musical.