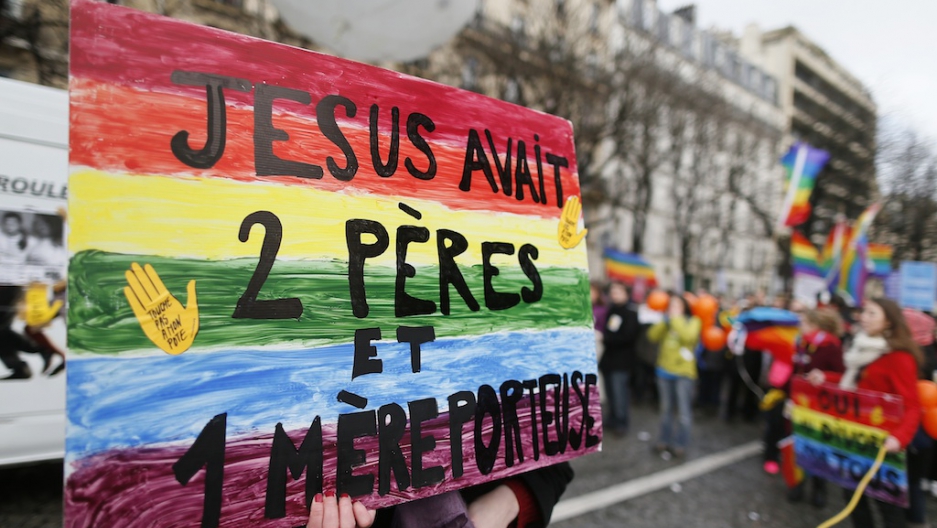 A woman holds a placard reading 'Jesus had two fathers and one surrogate mother' during a demonstration for the legalization of gay marriage and LGBT parenting in Paris, Jan. 27, 2013.
Credit: Kenzo Tribouillard
Share

GENEVA, Switzerland — While supporters celebrated France becoming the 14th country to legislate for marriage equality, across the world lesbian, gay, bisexual and transgender (LGBT) people continue to struggle against violence and discrimination.

Just days before the passage of the historic French law, a gay couple were badly beaten in Paris, just one of many homophobic attacks apparently triggered by the bill.

Around the same time, 34 students in Ghana were expelled from school on suspicion of being lesbian. Instead of condemning the decision, a mainstream newspaper condemned the students as “bestial and detestable.” Meanwhile in Malaysia, a government sponsored, anti-gay musical aims to “warn young people of the perils” of homosexuality, giving rise to fears of further hatred and harassment among the already persecuted LGBT community.

Seventy-six countries continue to criminalise same-sex relations. The Singapore High Court recently upheld an anti-homosexuality law, while the president of Senegal has declared homosexuality to be incompatible with the country's cultural values.

While many celebrate in France, New Zealand and Uruguay, at the international level marriage equality is far off the agenda. Human rights advocates are pressing a modest agenda that calls for condemnation of homophobic harassment and violence and a prohibition against unfair discrimination.

Yet even these modest asks are met with resistance from some Eastern European, African and Islamic states. Russia, for example, continues to insist that there is no foundation in international law for “controversial concepts” such as non-discrimination on the grounds of sexual orientation or gender identity.

Given the international politics around this issue, the champion of LGBT rights at the UN has emerged from a perhaps surprising quarter. It was South Africa that led an historic 2011 resolution on sexual orientation and gender identity. However, while South Africa’s progressive domestic policies place it in the vanguard of states on LGBT rights, internationally South Africa’s leadership came at the price of isolating itself from the African group. This is no small thing in a system where bloc politics still by and large prevail.

The Council’s 2011 resolution expresses “grave concern” about violence and discrimination based on sexual orientation and gender identity, a statement that should be entirely uncontroversial. However, 19 of the 47 members of the Council — almost all African or members of the Organization of Islamic Cooperation — voted against the text.

Similarly, a UN debate held last year on violence and discrimination against LGBT people was boycotted by Islamic states. It is profoundly disappointing that a group of states that stand so strongly against racial and religious discrimination are not prepared to take a principled stand in support of equality for all.

South Africa has attempted to steer a path through this thorny political situation and, as an African state, perhaps stands a better chance of success than would a more powerful but possibly more divisive ally such as the US. Now, two years on from the original groundbreaking resolution, the Council must act to ensure that issues of sexual orientation and gender identity remain firmly on the international community’s agenda.

The most far-reaching option among the possible courses of action for the Council is the appointment of an independent expert or group to monitor and report on instances of homophobic violence and discrimination. The Council has 48 such mechanisms, with briefs to monitor and report on a range of serious country situations and thematic issues. However, on sensitive issues, the creation of these mechanisms requires the expenditure of considerable political capital.

Despite the hurdles to establishing such a mechanism, international momentum is gathering. At an historic conference in Oslo earlier this month, 200 delegates from 84 countries heard calls from High Commissioner for Human Rights Navanethem Pillay and UN Secretary-General Ban Ki-moon for the UN to systematize its response.

Sending a signal that it too is ready to consider this option, South Africa, which co-chaired the conference with Norway, and who will again lead the Council’s response at the coming session, endorsed the call in a final statement.

The creation of a mechanism charged with devoting attention to LGBT issues would be ground breaking, bringing systemic attention to an issue that has long struggled to find its rightful place on the international agenda.

This year, the political composition of the Council is more favourable than ever before to LGBT rights. It is critical that States seize this opportunity to move the UN response past debating whether LGBT rights are human rights, and on to substantive discussion of the violations and discrimination that individuals face.

Making her own appeal to the UN, Ms Pillay said LGBT persons “Are looking to the UN for protection. They expect us to live up to our ideals of equal rights for all, no distinctions, no exceptions. We must not betray them.” It is now down to Council members to decide.

Dr. Heather Collister is responsible for the LGBT rights program of the International Service for Human Rights in Geneva.