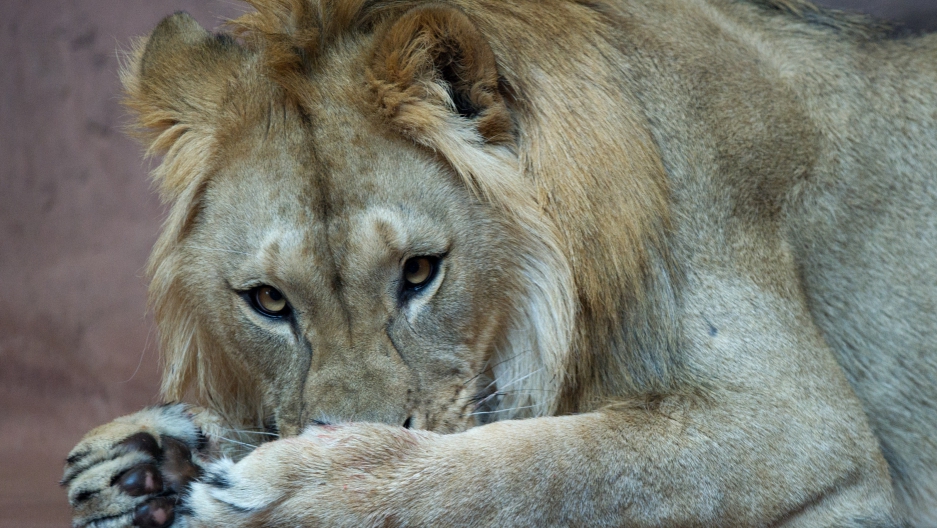 Lion Joco lies in his enclosure at Zoopark in†Erfurt, Germany, on February 14, 2013. He was born with squinting eyes last year at the Hanover Zoo.
Share

Investigators have determined that Dianna Hanson, the woman attacked and killed by a lion, accidentally caused her own death by leaving the door to the lion's feeding cage open.

Fresno County Sheriff's Capt. Steve Wilkins said that his office determined that the 24-year-old volunteer's death was an "unfortunate accident."

Wilkins has said the investigation into Hanson's death is now closed.

More from GlobalPost: California animal park reopens after a lion killed a woman

Hanson accidentally left the door open to the lion's feeding cage while she cleaned the adjoining enclosure.

The 550 pound male African lion named Cous Cous escaped from his cage and pounced on her, fracturing her neck.

The lion was shot and killed after it could not be lured away from Hanson's body.

The US Department of Agriculture earlier found that the big-cat sanctuary, Project Survival's Cat Haven, was not at fault in Hanson's death. They found that the sanctuary had proper policies, adequate training for employees and well-functioning enclosures.

Dianna Hanson's father, Paul Hanson, told the San Francisco Chronicle newspaper that he and his brother visited Cat Haven on April 15 and met with the sanctuary's owner.

"They walked us through the whole thing, step by step," said Hanson. "After seeing it firsthand, it looks like it was just a tragic mistake. It looks like she got distracted or something and didn't shut the door to the lion's cage before going out to clean up the manure," he said.

The lion, Cous Cous, "probably leaped up on her to play and snapped her neck instantaneously."