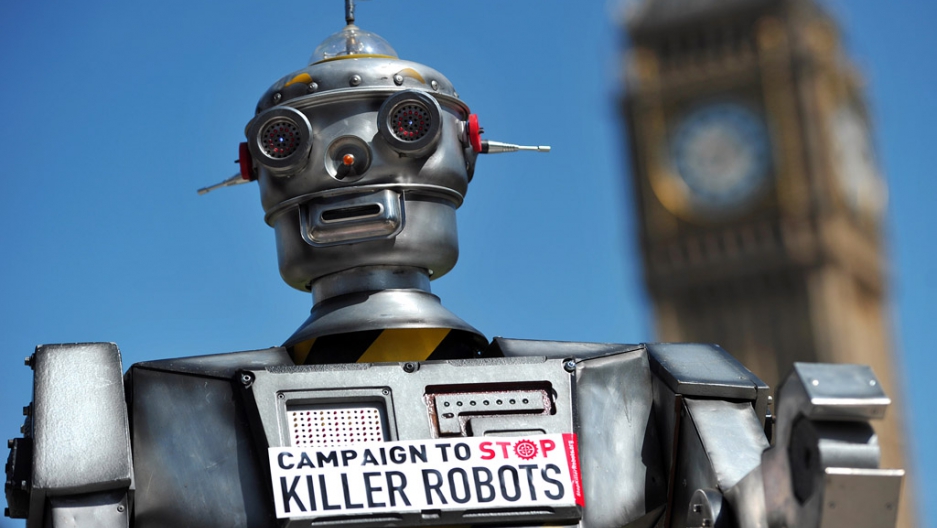 A mock "killer robot" is pictured in central London on April 23, 2013 during the launching of the Campaign to stop Killer Robots, which calls for the ban of lethal robot weapons that would be able to select and attack targets without any human intervention.
Credit: CARL COURT
Share

That is why it is backing the efforts of a British group that on Monday launched the global “Campaign to stop Killer Robots.”

The group — a collection of non-governmental organizations — is calling for the ban of all “fully autonomous weapons” that exclude humans in their decision making.

“Lethal armed robots that could target and kill without any human intervention should never be built,” HRW representative Steve Goose said online. “A human should always be ‘in-the-loop’ when decisions are made on the battlefield. Killer robots would cross moral and legal boundaries, and should be rejected as repugnant to the public conscience.”

The use of aerial drones is already widespread, though a human hand is always kept on the trigger.

Yet, nations such as the US, China, Israel, Russia and United Kingdom are quickly approaching the stage where new, weaponized robots can select and attack targets at-will, Goose said.

It suggested that grey legal areas would be created by battlefield deaths committed by machines, weapons that would also endanger civilians.

On May 27 in Geneva, a UN representative is to deliver a report on killer robots to the Human Rights Council. The report is expected to contain recommendations for government action on fully autonomous weapons.

The campaign is bolstered by 1997 Nobel Peace Prize winner Jody Williams, who led the drive to ban anti-personnel land mines.

“As people learn about our campaign, they will flock to it,” Williams told BBC. “The public conscience is horrified to learn about this possible advance in weapons systems. People don't want killer robots out there.... Normal human beings find it repulsive.”