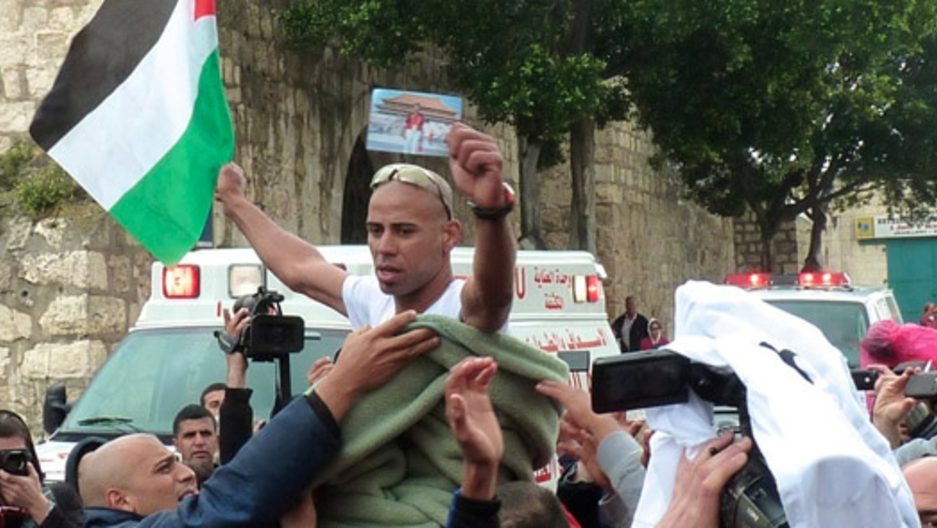 Abdel Nasser Awajme of Jericho, winner of the first Bethlehem Marathon, was hoisted up at the finish line. He's holding a Palestinian flag and a photo of his running coach. (Photo: Matthew Bell)

The bombing at the Boston Marathon put police and security forces in London on high alert over the weekend.

The city held its annual marathon, with more than 35,000 runners and some 500,000 spectators showing up for the event.

Things went smoothly in London. Participants wore black ribbons and held a moment of silence in honor of the victims of the Boston bombings victims. There was a similar scene — though on a much smaller scale — at the first international marathon in the biblical town of Bethlehem.

The stone-paved expanse of Manger Square is adjacent to the Church of the Nativity, where Christians believe Jesus was born. The area is one of the most popular sites for Holy Land pilgrims. But early on Sunday morning, the plaza was filled with people in running gear, warming up for the inaugural Palestine Marathon.

A few hundred people were there to run all or part of the big race. About half the crowd appeared to be Palestinians and the other half, foreign tourists or expats who live and work in Israel or the West Bank. The event was about sport, but it also had an emphatic political theme as well. Its full official name was the “Right to Movement Palestine Marathon.”

Speaking at the starting line, Jibril Rajoub, head of the Palestine Olympic Committee, said there was a message here about solidarity with the Palestinian people.

“I think this is also a message to the Israelis to recharge their mental batteries,” he said. The Israelis, Rajoub added, should “reconsider their policies and start recognizing facts on the ground.”

One fact that organizers wanted to highlight was the marathon route itself.

Because the area in Bethlehem controlled by the Palestinian Authority is so limited, runners had to do the same loop twice to complete a full 26 miles. There was also criticism of Israel’s refusal to give a group of more than 20 runners from the Gaza Strip permission to attend Sunday’s race in the West Bank town of Bethlehem.

Before heading to the starting line, participants observed a moment of silence for the victims in Boston. One runner stood out in his bright green Boston Celtics basketball jersey.

A spokesman for the Palestine Liberation Organization, Xavier Abu Eid wasn't ready for a full marathon, but relished being there to run part of Sunday’s race.

“Targeting civilians, especially people that are playing a sport and they are not harming anyone, is sick.”

"Most of our people here will have in mind what happened in Boston," Abu Eid said said.

Along the marathon route, runners passed by tall concrete stretches of the Israeli security barrier that snakes its way around Bethlehem. The walls are covered in pro-Palestinian graffiti and they are guarded from above by Israeli soldiers in watch towers. On the street below, uniformed Palestinian security forces stood guard and cheered on runners in the rain.

With an AK-47 at his side, security officer Hamza Abdullah said he and his men were told to be “ready for anything after what happened in Boston.”

Abdullah would not talk specifics, but he said, “our eyes are wide open.”

Not everyone in Bethlehem though was thrilled about the marathon.

In a refugee camp close to the marathon route, a middle-aged man criticized men and women running together.

"It’s against our religion,” he said. (And) “the tight-fitting clothes on some of the women are not appropriate.”

But an 18-year-old named Nasayem Abu Srur, a high school student who ran a 5K on Sunday, said she disagreed completely. Of all her classmates, Abu Srur said she was the only young woman running.

“A lot of people don’t think girls should be running in the race,” she said. “But they should be allowed to run if they want to.”

Out of a field of about hundred or so runners participating in the full marathon, Palestinian athlete Abdel-Nasser Awajme from Jericho won the race handily. He crossed the finish line in a little over three hours. And the crowd hoisted him on their shoulders.

The winner made a short but defiant speech. He dedicated his victory to Palestinian martyrs and to the prisoners in Israeli jails. And he said Bethlehem’s first international marathon showed that Palestinians can overcome all obstacles.