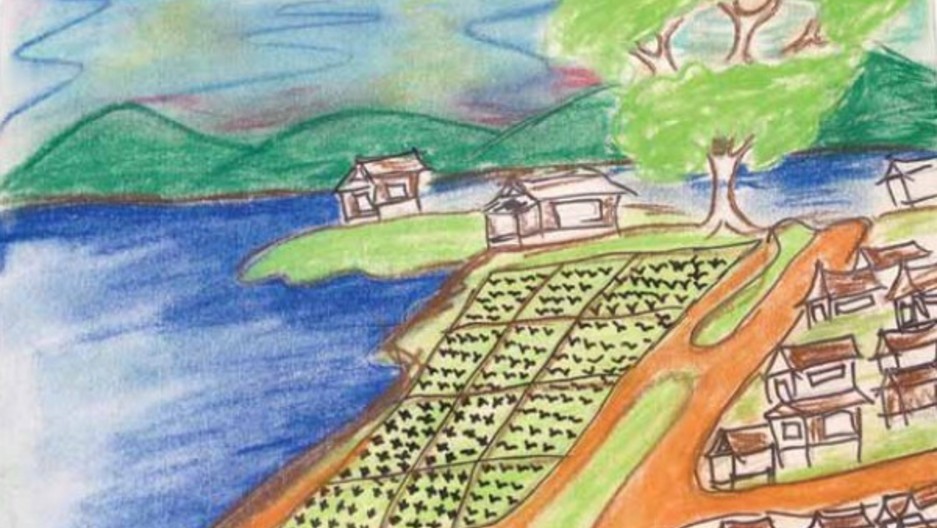 Share
Over the past year a democratic wave has swept Myanmar, also known as Burma. The changes have also included talks to end brutal clashes between the government and a rebel group led by the Karen, an ethnic minority. That war has forced hundreds of thousands of ethnic Karen from the country, first to refugee camps, and then on to resettle elsewhere. In the US, it turns out that North Carolina is home to a growing Karen community. Reporter Andrew Parsons has this story about one family finding their foothold there. On a recent afternoon, Kahdohmoo Juelah's sketchbooks and paintings were stashed throughout the counseling office at Chapel Hill High School. It's a tiny, cramped space. But Kahdohmoo, a lean 19-year-old wearing an oversized Chicago Bulls hat, didn't seem to notice. Nothing compares to the refugee camp in Thailand. His English is still rough, so he lined up three notebooks on the table to make his point. "This is my friend's mom, and this is me, this is where my friend live," he said pointing to each notebook. "So in Thailand, it hard to live. There's nothing to eat." Thailand is a common theme in Kahdohmoo's art. He spent nearly a decade there, from age two to 12. He and his family had fled their village in Burma. A long war raged on between the government and the Karen ethnic group, to which Kahdohmoo belongs. There have been steps towards a peace agreement over the past year, but still hundreds of thousands of Karen have been displaced since the fighting began over 60 years ago. Refugees often flee to Thailand first, and then are helped into homes all around the world. Kahdohmoo's memories of his time in Thailand were present in his sketches. They included landscapes filled with refugee tents, a hospital, a school and a single tree. He paused before offering a story. "That girl, she die on this tree. She kill herself with rope," he said. He said he didn't know why, she killed herself but that it wasn't the only time it occurred at the refugee camp. For about three years, art therapy has helped Kahdohmoo process his journey. And he isn't alone in Orange County, North Carolina, where about 1,000 Karen refugees now call home. And it's a community often dealing depression, anxiety or posttraumatic stress. All this keeps therapist Hilary Rubesin busy trekking from school to school around the county. "Ninety percent of my clients are refugees from Burma," she said. Rubesin works out of the Art Therapy Institute down the road and is one of the few licensed counselors in the area that is trained in art therapy. When Kahdohmoo started high school here in 2009, he'd been in the US for almost two years. But his English comprehension was still very. His ESL teacher at Chapel Hill High School, Courtney George said he struggled. "He seemed very, very angry," she said. "When I would see him by seventh period, you could see that the day was just wearing on him. And he would either have an outburst or get into an altercation with another student in class or storm off very dramatically." Kahdohmoo's identity is important to him. His notebooks have the initials "BK" and a red and blue rising sun of the Karen flag scattered across them. "B" stands for blood and "K" for Karen. But other Burmese ethnic groups live here, too. So Kahdohmoo might get called Burmese, which bothers him since there are documented human rights abuses committed by the Burmese again the ethnic Karen. "I hate when they call us Burmese," he said. "Burmese people kill a lot of Karen people already." His own blood, literally, is also on his mind. When he was a baby in Burma, his mother snuck him from their village, without the Karen army noticing. They went to a government-controlled city. Kahdohmoo need a blood transfusion for his anemia. The blood he got came from a Burmese soldier. His therapist, Rubesin, has helped convince Kahdohmoo that new blood now runs through his veins. But his mother, Khu Khu Juelah, explained that it still comes up a lot. "Some of his friends tease him and saying that Kahdohmoo has blood coming from Burmese soldier," she said through a translator. "That's why his identity as a Karen is very important." On a recent Saturday, Khu Khu was up early cooking while her two youngest children played outside. They live in a Chapel Hill housing project. She usually works night shifts as a cleaner at the University of North Carolina and sleeps in the morning, but the previous day was her day off. She also takes pride in her Karen identity. She spent the morning preparing a large, traditional Karen meal for some friends coming over later in the day. A mixture of cow stomach and liver simmered on the stove while whole fish sizzled in a skillet outside. Her life is so different than in Burma. She's about to buy a new home, away from the projects. But she still remembers trekking to the refugee camp after the Burmese army seized their land. "During our journey, two or three children die on the way," she said. "Because something wrong with food or not enough food." Now, her concerns are different, like how she'll pay for her kids' college. But she does worry less about Kahdohmoo. She noted that his art therapy sessions have helped his behavior and he now listens to her more. He also studies and assists after school Karen language classes for younger refugees. Kahdohmoo has dreams of becoming a US Marine. The Karen rap music that's always on his iPod talks about being tough, stepping up and being a man — things embodied in the military. But for now, he's focused on staying in school, graduating, and channeling any anger on to his sketchbook.