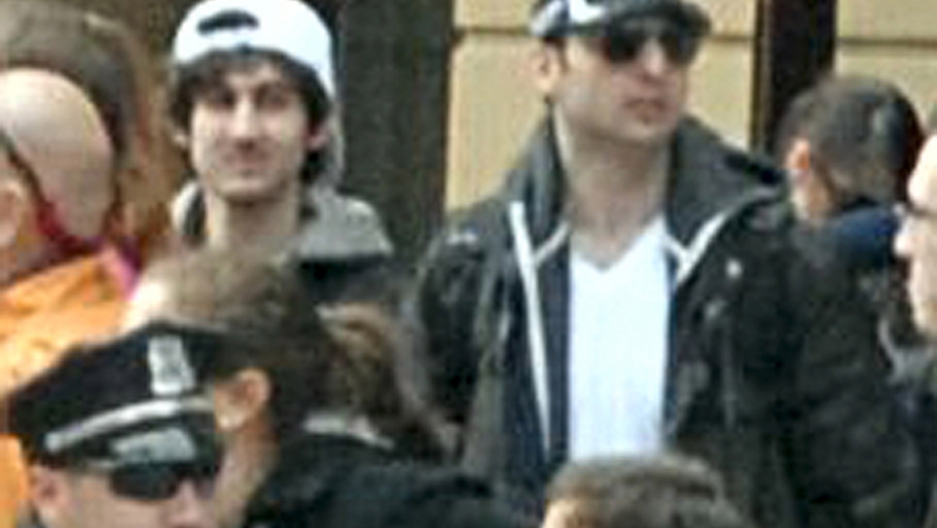 In this image released by the Federal Bureau of Investigation (FBI) on April 19, 2013, two suspects in the Boston Marathon bombing walk near the marathon finish line on April 15, 2013 in Boston, Massachusetts.
Credit: Handout
Share

Investigators scoured hours and hours of surveillance footage from the Boston marathon for the tiniest clue that could lead them to the suspects who committed this horrible act.

Thousands of man-hours and just three days later — Bingo. They found what they were looking for.

On Thursday, FBI special agent Richard DesLauriers announced that police were searching for two men: Suspect No. 1, wearing a dark baseball cap, and Suspect No. 2, wearing a similar hat in white.

That afternoon, police distributed video footage and still images of the suspects to the public.

A positive ID wasn't far behind.

Would the police have identified Tamerlan and Dzhokhar Tsarnaev without CCTV footage from nearby stores and street corners?

We may never know.

But now some lawmakers and calling for more security cameras to be placed in urban areas to assist law enforcement in these types of cases.

"They had to piece together I don't know how many thousands of videos," said Rep. Peter King, a New York Republican who sits on the House Committee on Homeland Security. "I think CCTV [closed-circuit television] cameras are much more needed in urban areas."

Slate's technology columnist Farhad Manjoo summed up his case for more surveillance like this:

"Yes, you don’t like to be watched. Neither do I. But of all the measures we might consider to improve security in an age of terrorism, installing surveillance cameras everywhere may be the best choice. They’re cheap, less intrusive than many physical security systems, and—as will hopefully be the case with the Boston bombing—they can be extremely effective at solving crimes."

London, the most heavily surveilled city in the world, showed how effective CCTV can be after a team of suicide bombers attacked the city's transportation system on July 7, 2005.

Police used surveillance footage from 76 cameras at just one railway station to identify the suspects within four days.

The use of surveillance cameras in the US has exploded in the past decade, with New York leading the way.

The city now has about 3,000 security cameras in Lower Manhattan alone.

"The Boston bombing is a terrible reminder of why we've made these investments—including camera technology that could help us deter an attack, or investigate and apprehend those involved," New York Mayor Michael Bloomberg said this week.

New York City's network now has the ability to "alert police to abnormalities it detects on the street, such as an abandoned package that is left on a corner."

But privacy advocates aren't sure that increasing the presence of CCTV will make us safer, or just make us think we're safer.

Jonathan Turley, a professor of Public Interest Law at George Washington University, questioned the idea that surveillance cameras could ever prevent a terrorist attack in an urban area.

"[The suspects] placed the devices in one of the most surveilled areas of Boston with an abundance of police and cameras. There is only so much that a free nation can do to avoid such an attack," Turley wrote in USA Today.

Some privacy advocates say the fact that Boston police were able to catch the suspects based only on private CCTV feeds from local stores, and not a widespread public surveillance network, shows that more invasive surveillance isn't necessary.

"It's one thing to have private closed-circuit cameras and look at feeds after the fact," Alan Butler, a lawyer with the Electronic Privacy Information Center told the Wall Street Journal.

"It's very different if you're talking about systems of cameras identifying and tracking people over time, all the time. Especially if you couple that with facial recognition and license-plate readers and databases."