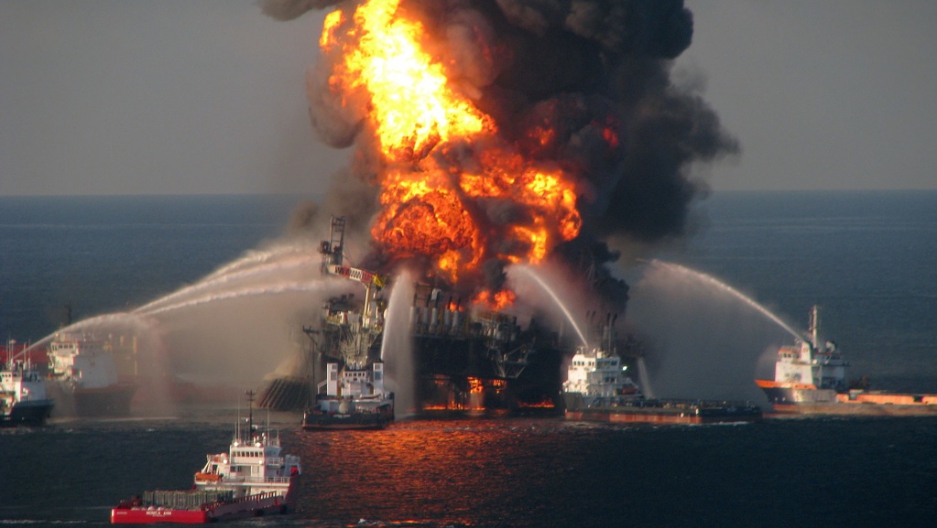 In this handout image provided be the U.S. Coast Guard, fire boat response crews battle the blazing remnants of the off shore oil rig Deepwater Horizon in the Gulf of Mexico on April 21, 2010 near New Orleans, Louisiana. An estimated 206 million gallons of crude oil have spilled into the gulf from accident. Multiple Coast Guard helicopters, planes and cutters responded to rescue the Deepwater Horizon's 126 person crew.
Credit: U.S. Coast Guard
Share

Florida became the latest state to file a lawsuit against BP and Halliburton seeking economic damages from the 2010 oil spill.

Attorney general Pam Bondi filed the 40-page lawsuit in federal court in Panama City on Saturday, the three year anniversary of the Deepwater Horizon oil spill that killed 11 workers and tarnished the Gulf of Mexico.

“The state of Florida suffered considerable economic losses as a result of the Deepwater Horizon oil spill, and BP and Halliburton must be held accountable,” Bondi said in a news release.

The suit alleges that Florida is owed lost revenues after the oil spill sullied 1,100 miles of coastline and marshland along the Gulf Coast.

Bondi did not specify how much the state is seeking in damages but Florida is also seeking punitive damages under maritime and Florida common law "due to the egregious nature of the misconduct that led to this environmental and economic disaster."

The suit came on day after Mississippi filed its own lawsuit against BP.

Mississippi Attorney General Jim Hood said that the state wanted to settle but that BP refused to negotiate.