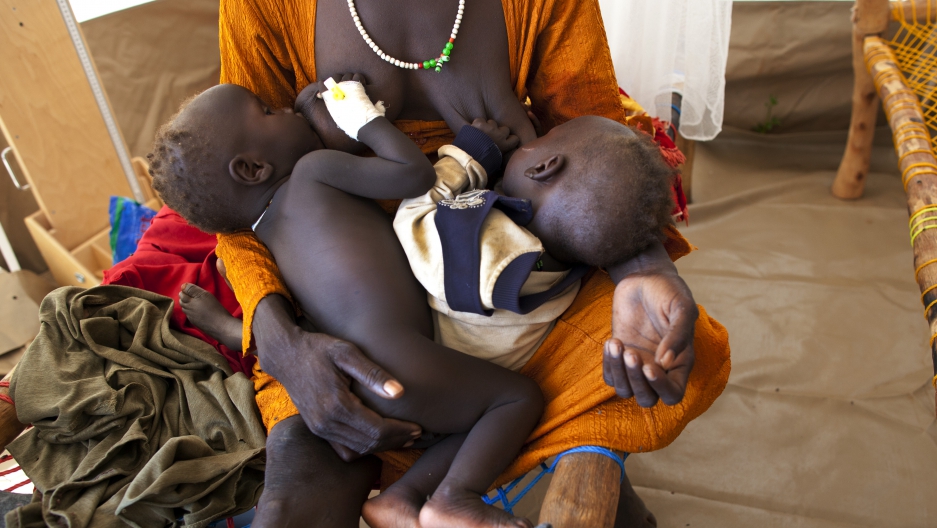 A Sudanese mother breastfeeds both of her small children who are hospitalized at the MSF ( Medecins Sans Frontieres ) field hospital at the Yida refugee camp along the border with North Sudan July 5, 2012 in Yida, South Sudan.
Credit: Paula Bronstein
Share

HIV-infected mothers are less likely to transmit the virus to their newborns if they breastfeed their child exclusively for more than 4 months, a study in Zambia showed

However, the amount of HIV in an infected mother’s breast milk spikes when weaning begins, the new study suggests.

The findings of researchers who looked at the breast milk of 958 HIV-infected women and their infants in Lusaka and followed them for two years, were published in Science Translational Medicine.

The researchers from Columbia University wrote:

"Our results have profound implications for prevention of mother-to child HIV transmission programs in settings where breast-feeding is necessary to protect infant and maternal health."

They also have important implications in sub-Saharan Africa, where the risk of infants contracting and dying from diarrheal diseases or pneumonia is higher, VOA wrote.

Nature, meantime, wrote that the findings were likely to add urgency to efforts to ensure that infected mothers without access to formula took antiretroviral drugs beyond the time that they weaned their infants.

This was because women who stopped breast feeding had "dramatically higher" levels of the virus, said Louise Kuhn, lead author of the study, adding:

"Weaning should be a slow and gradual process."

HIV-infected women typically had a 10 percent to 15 percent chance of transmitting the virus to their babies through breast milk.

However, in sub-Saharan Africa nursing was an important way to help children develop immunities to fight many infectious diseases.

Complicating the situation, said Kuhn, antiretroviral drugs weren’t available for the treatment of advanced HIV in sub-Saharan Africa at the time of the study.

And early weaning had not been successful in preventing HIV transmission from mother to baby. The study went some way to explaining why.

"We found that stopping breastfeeding early was a really bad idea for several different reasons."

Researchers discovered the highest concentrations of HIV in the breast milk of women who had stopped breast feeding at 4 months.

More than three-quarters of them had evidence of the virus in their milk, compared with just under 40 percent of the women who were still breastfeeding, Bloomberg wrote, citing the study.

Generally, HIV-infected women who breastfed without supplementing their infants’ diets with other fluids or foods had lower levels of the AIDS virus in their milk.