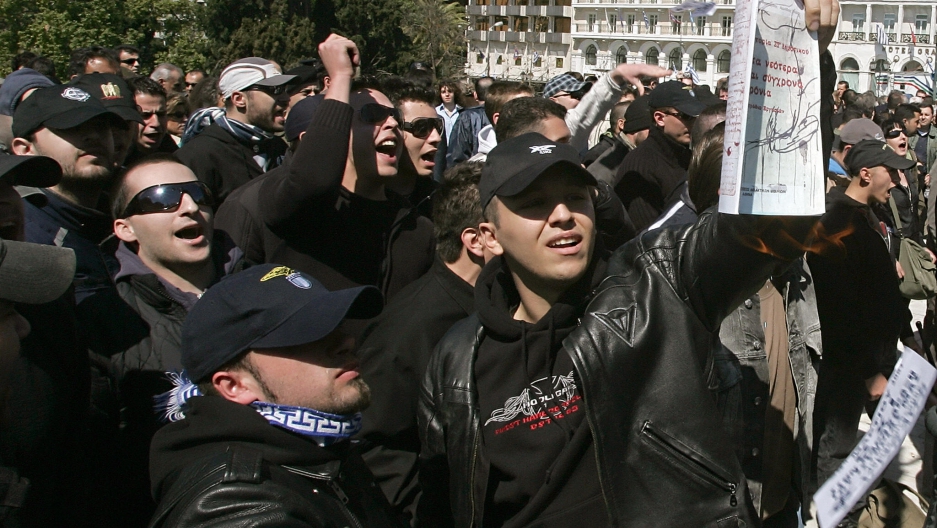 Members of the 'Golden Dawn' nationalist group hold a copy of the Greek sixth-grade history book before burning it, while protesting in Athens during the celebrations of the Greek Independence Day.
Credit: Louisa Gouliamaki
Share

The Council of Europe's human rights commissioner Nils Muiznieks said in a report that the embattled southern European country had failed to control the spread of violence committed by followers of the fascist party.

In particular, the government has failed to curb hate crimes against migrants.

"A number of the attacks have been linked to members or supporters, including parliamentarians, of the neo-Nazi political party 'Golden Dawn'" the report read.

“What is also particularly worrying is that from statements made by the party’s leadership and ideological documents available on its official website it is clear that ‘Golden Dawn’ is a party that is against parliamentary democracy, and treats it with contempt," it went on to say.

The report went on to recommend that it was "possible to impose effective penalties, and even prohibition if necessary" on Golden Dawn.

The Greek government has since dismissed the recommendations, saying that such a move could backfire.

"The parliamentary strength given to this organisation is basically an expression of popular disappointment and protest against harsh, albeit inevitable, austerity measures, as well as increasing unemployment following consecutive years of economic recession," the Greek government responded in a letter.

"Racist attitudes remain a marginal phenomenon in Greek society... Its culture of hospitality and openness remains strong and vivid."

The once-fringe party rose to prominence in 2012 after winning seven percentage points in the national elections.

The election put 21 members of the extreme right-wing party in the Vouli, the Greek parliament.