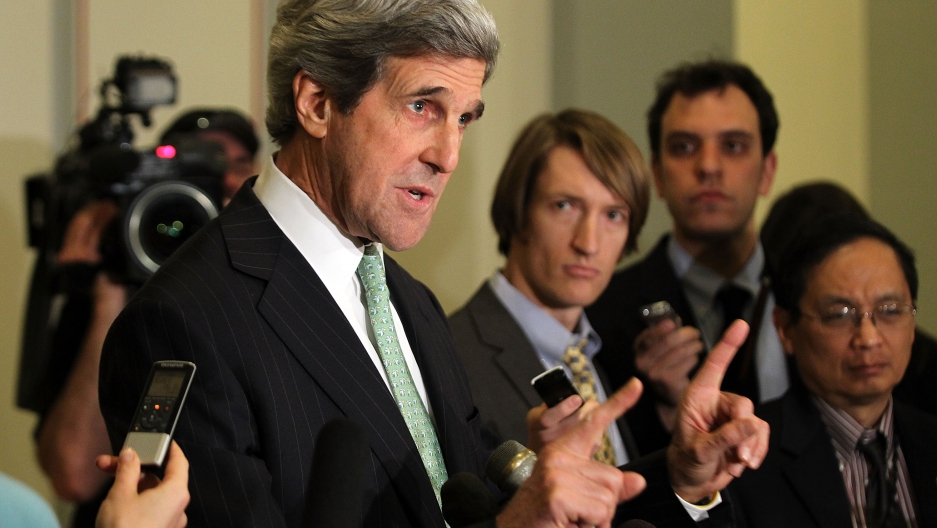 John Kerry arrived in China on April 13, 2013, to talk to top leaders amid speculation that North Korea is preparing for a missile launch.
Credit: Alex Wong
Share

The United States and China on Saturday agreed to push for the peaceful denuclearization of the Korean peninsula during a one-day visit by US Secretary of State John Kerry, which was aimed at persuading Beijing to take a tougher stance on their belligerent neighbor North Korea.

During his first trip to China as secretary of state, Kerry met with Chinese President Xi Jinping and his Chinese counterpart, Wang Yi, before attending an official dinner with China's foreign policy chief, Yang Jiechi.

"China and the United States must together take steps in order to achieve the goal of a denuclearized Korean peninsula. And today we agreed that further discussions to bear down very quickly with great specificity on exactly how we will accomplish this goal," Kerry told reporters before dinner with Yang.

Yang, speaking through an interpreter, said China was "firmly committed to upholding peace and stability and advancing the denuclearization process on the Korean peninsula.

"To properly address the Korea nuclear issue serves the common interests of all parties. It is also the shared responsibility of all parties," he said.

Before meeting with Wang, Kerry said the world was facing "a critical time with some very challenging issues", the BBC reported.

He added that he hoped “two great powers, China and the United States, can work effectively to solve problems.”

On top of the Korean conflict, there was also "the challenge of Iran and nuclear weapons, Syria and the Middle East, and economies around the world that are in need of a boost", Kerry said.

The US hopes that China can increase its pressure on North Korea to back down and return to nuclear talks, the London Telegraph reported.

China is North Korea's main ally and is seen as wielding the greatest influence over Pyongyang.

On Friday, Kerry was in South Korea where he met with President Park Geun-Hye and offered US support to her plans for initiating some trust-building with North Korea, AFP reported.

"China has an enormous ability to help make a difference here, and I hope that in our conversations when I get there that we'll be able to lay out a path ahead that can defuse this tension," he said.

"There is no group of leaders on the face of the planet who have more capacity to make a difference in this than the Chinese, and everybody knows it, including, I believe, them," he said.

CNN wrote that an unnamed official said Friday the US wants China to "stop the money trail into North Korea" and to tell the North that de-nuclearization of the Korean peninsula is China's goal.

Kerry heads to Tokyo on Sunday.