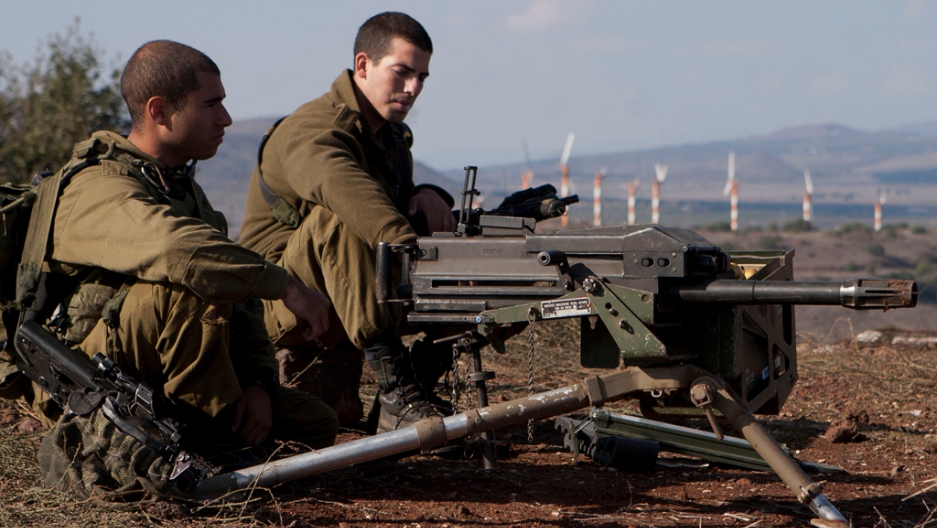 Israeli soldiers overlooking the ceasefire line between Israel and Syria in the Golan Heights.
Share

GOLAN HEIGHTS, Israel — Until May of 2011, the green and undulating border between Israel and Syria was as placid as any hostile frontier could be. Only a flimsy chain-link fence marked the 50 mile cease-fire line of 1967.

On one side were Israeli Jewish and Druze communities, on the other, unarmed blue-beret topped UN peacekeepers, who languidly patrolled what was essentially a disregarded perimeter.

No one, not even Syrian President Bashar al-Assad, had any interest in disturbing the peace.

"Assad always had other problems to deal with, not Israel," said Ret. Col. Eshkol Shokron, 43, who commanded the Golan division until his retirement last August. "Any Israeli preparedness focused on a possible war, you know, Syrian tanks crossing the border."

The UN forces, he said, "expected a quiet border."

There is no longer even the pretense of a quiet border. Since the eruption of Syria’s civil war two years ago, everything has changed. Today, Israel is at a top level level of military readiness on its Syrian border with deployments of elite army units the likes of which have not been seen in over 30 years.

Nakba Day, or Day of Catastrophe, is the Palestinian commemoration of the mass displacement that followed Israel's War of Independence, which started in May of 1948. It is normally marked by relatively muted demonstrations in the West Bank and Gaza.

In 2011, however, several thousand Palestinian refugees gathered at the all-but unguarded Syrian border with Israel and stormed through. One hundred made it into the central square of Mjadal Shams, where before the Israeli army arrived, Druze religious elders were the ones to calm the ensuing mayhem. Four people were killed.

This was three months into the Syrian civil war. "When you have many dis-unified groups, the best thing to do is to find something in common," Shokon, who was hit by a hurled rock that day, explained. "Assad put thousands of Palestinians on buses and sent them to the border, and said 'go make problems.' It was all planned.”

Three months later came Naksa Day, or Day of Setback, which commemorates the losses of the 1967 Six Day War in which, as in 1948, an Arab League declaration of war against Israel resulted in the loss of Palestinian territory.

"Again," Shokron continued, "Assad got them organized and put them on buses. This time, not one crossed the border, and about 50 died.”

The Nakba Day incursion, from the Israeli point of view, was the wake-up bell that alerted the military to the fact that the quiet border no longer existed. One way or another, the Syrian civil war demanded of Israel a new preparedness.

Today, the border with Syria resembles the far more volatile border with Lebanon. A tall, impassable fence marks the line, dotted with sensors. Trenches align with the fence. Old minefields have been restored.

Where reservists used to stroll, elite units of regular soldiers are now on patrol. Civilian communities have been trained in the evacuation of casualties and shelters have been built or refurbished.

"We do feel we need to respond when something spills over into Israel," said Col. Peter Lerner, a spokesman for the Israeli Defense Forces. "When people are deliberately shooting at our troops, we respond to those incidents. I'm pretty sure it's not an issue of chain of command, but that they are just taking advantage of an opportunity to shoot at Israel troops."

The 40,000 residents of the Golan Heights, split evenly between Druze — an ancient, Middle Eastern monotheistic cast — and Jews, "are not the sort of people to overreact," Shokron said. "They trust the authorities. If something happens and we have to go into the shelters, they know what to do."

Golan communities seem determined to prove him right. Residents of border communities, where the boom of mortars and shelling has become an everyday occurrence, display a determined casualness. Sheffi Mor, who is in charge of tourism for Kibbutz Merom Golan, dismissed a question about the sounds of wartime wafting across the border by pointing out that, "Syrian booms come from the east and IDF booms come from the west, so we always have a pretty good sense of what's happening."

"Life continues," he said. His cabins have been at full capacity all winter. "The place where things are terrible is on the other side of the border," he added, "over there, that's suffering."

A new set of tourist cabins on the kibbutz, a communal settlement, is now under construction by a contractor from Majdal Shams.

Qasem Sabagh, a producer living in Majdal Shams, said the Syrian civil war has had a blanket effect on the Druze residents, many of whom have relatives living across the border. "It’s the only thing people talk about. It’s total heartbreak," he said.

Of the more than 150 Druze students who once studied in Syria, their passage safeguarded by the UN peacekeepers when every academic year started and ended, only 13 returned last September. "Only the ones who had just a few classes left or would have lost all their credits otherwise," said Sabagh.

A minority in the three Druze Golan villages still supports the Syrian president. Some claim they are a minuscule number with loud voices, others say they may account for up to 40 percent of the population.

Moataz Abu Saleh, a poet and theater director, published an op-ed last week lambasting the Assad supporters for asserting that they represent the real voice of Golan Druze. Referring to them as "violent hooligans," he wrote, "the people who claim to be Assad's soldiers on the Golan are basically thugs, they get into fistfights and threaten people. And they have absolutely no authority to claim the right to speak in the name of all of us on the Golan."

While daily routines persist unchanged despite the threat from across the border, Golan communities have significantly beefed up their readiness.

"I give much more of my time to civilian security preparations — preparing safe rooms, setting up community situation rooms — than I ever have," Eli Malka, the head of the local governing body, acknowledged.

"But mostly we see what's going on the other side,” he said. “We're very worried about the cruelty and the more organized Islamist rebels installing themselves along our border, constituting a new threat."

More from GlobalPost: Women not welcome at Western Wall?

After 40 years of preparing for Syrian tanks, "There won't be war with Syria for the next 20 years," said Shokron, the retired commander. "There may not be a Syria."

Instead, the Israeli army is girding itself for a more amorphous battle with extremist elements. "If I had to say, I'd say they hate Assad more than they hate us," he said, "but once they take Assad down, their next target is Israel."

He foresees the auguring of another border with terror on the Syrian front. “They gain legitimacy through hatred of Israel," he said.