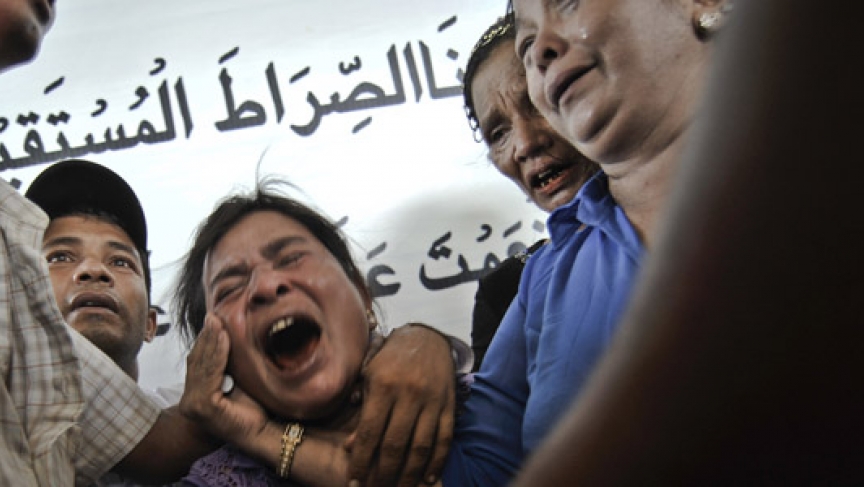 A mourner is comforted outside the morgue at Yaeway cemetery north of Yangon at the funeral of the boys who died in the fire. (Photo: Kaung Htet)

At a cemetery north of Yangon, a crowd roars with grief, as the watch the arrival of the bodies of 13 boys. They died in their sleep last week, when a fire broke out in their Islamic boarding school in the city.

Muslims, who make up a minority in Myanmar (also known as Burma), have been living in fear, following three days of anti-Muslim mob violence in the heartlands that killed dozens of people. Authorities imposed martial law and sent troops to restore calm. But now the fire in the Yangon boys' school has Muslims in the country's largest city worried that the violence may be arriving on their doorstep.

Kyaw Win and his wife watched the bodies of their two sons, ages 13 and 15, being washed and prepared for burial.

"I feel very sad today," says Kyaw Win, as his wife weeps beside him. "I used to feel sad when my sons suffered small injuries. Now their whole bodies are burned, and they're dead. There are no words to express my sadness now."

One of the mourners at the funeral yells out that Buddhist fundamentalists used chemical weapons to kill the boys, and he says they're the victims of religiously motivated attacks that started outside Yangon.

Authorities say a preliminary investigation indicates an electrical failure sparked the fire. But many people here don't believe it.

"There were all sorts of rumors circulating, because people want to know what happened in the building, and they're very scared," says Kyaw Soe, a Muslim religious leader in Yangon.

"They're angry about the deaths of those 13 children."

A day after the school fire, police arrested two young men who they say had flammable materials outside of a nearby mosque. Township authorities have instituted curfews and sent out neighborhood patrols.

Meantime, stickers with the number "969"³ have started to appear on taxis and businesses in Yangon, identifying them as Buddhist. The numbers stand for the different attributes of the Buddha, and are thought to ward off evil. They're inspired by a radical Mandalay monk called U Wirathu, who was imprisoned for spreading hate messages against Muslims in 2003; he was released last year when the government freed political prisoners.

Now, neighbors in who lived together in Yangon's ethnically and religiously diverse communities are living on edge.

Htuu Lou Rae, a young Burmese man who started a group to foster religious harmony called Coexist, says there are many roots to the tension and violence, but religious hatred isn't the main factor. He says it's more a response to years of military rule.

"It is a reaction to all these oppression and discrimination by the junta for over 40 years," he says. "People react and take it out on people who are easy to discriminate."

Coexist has started its own sticker campaign, handing out stickers with the message, "We are Myanmar citizens who do not discriminate by either race or religion."

Today, they are handing them out near the burned school. The building's charred window frames have already been repainted at the request of authorities. Ye Naung Thein, a religious leader at a nearby mosque, was among the first to arrive at the scene after the fire was extinguished. He says he initially believed it was a deliberate attack, but not now.

When the police gave a press conference, he says, he found out that the school kept gasoline on site to run the generator during power outages, and that teachers had used pillows stuffed with old clothing to try to put out the fire. So he no longer thinks it was arson.

But, he says, if police don't do a thorough investigation to answer everyone's questions, there could be violence.

Last month, President Thein Sein warned in a televised speech that he would not hesitate to use force against "religious extremists" who instigate violence. That has some people worried that the religious tension and violence could stall the country's recent transition from oppressive military rule to democracy.