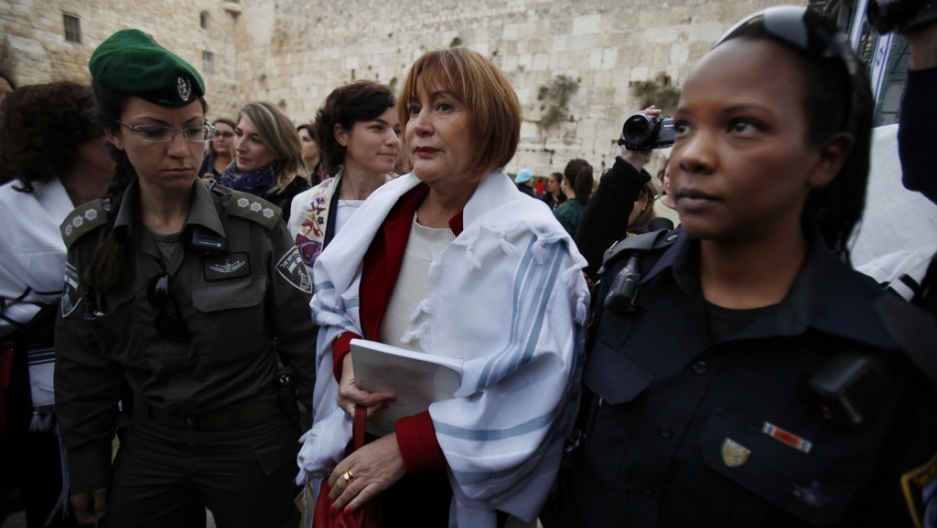 Israeli policewomen detain a member of the liberal religious group Women of the Wall wearing a 'Tallit,' or traditional Jewish prayer shawl, at the Western Wall in Jerusalem's Old City on April 11, 2013.
Credit: GALI TIBBON
Share

Israeli police today detained five women for performing traditionally male prayer rites at Jerusalem's Western Wall, the latest controversy in Israel's ongoing debate over who has the right to worship at one of Judaism's holiest sites.

The women's offense was to don the prayer shawls and phylacteries that Orthodox Jews believe should only be worn by men.

They were among some 120 women taking part in a monthly service organized by the campaign group Women of the Wall, which demands full rights for women to worship on alongside men.

Witnesses said the gathering, in the small women-only section of the Wall, was heckled by around 100 Orthodox men. One man set fire to a book belonging to the women; he was also detained.

The Women of the Wall prayer protests, which frequently end with women detained, are part of a long-running campaign by liberal Jews to relax the rules for worshipping at the site, which at the moment ban men and women from praying together and forbid women to wear prayer shawls or read holy scriptures aloud.

Prime Minister Benjamin Netanyahu recently ordered a task force to come up with possible solutions, leading to a proposal that part of the Western Wall plaza be converted into a special section for mixed-gender and women-led prayer.

On Thursday, the office of President Shimon Peres announced Peres is getting involved in finding a solution "that will allow women to pray as they wish and protect the feelings of traditional observant Jews."

The plan has yet to be approved by Israel's government, but it received a boost Wednesday when the Wall's Orthodox rabbi, Shmuel Rabinovich, came out in favor.

These latest arrests are "one more reminder of the urgent need to reach a permanent solution and make the Western Wall once again a symbol of unity among the Jewish people, and not one of discord and strife," said a statement by the chairman of the task force behind the proposal, Natan Sharansky.

The plan will also need to be agreed upon by Muslim authorities who govern the adjoining Islamic holy sites.