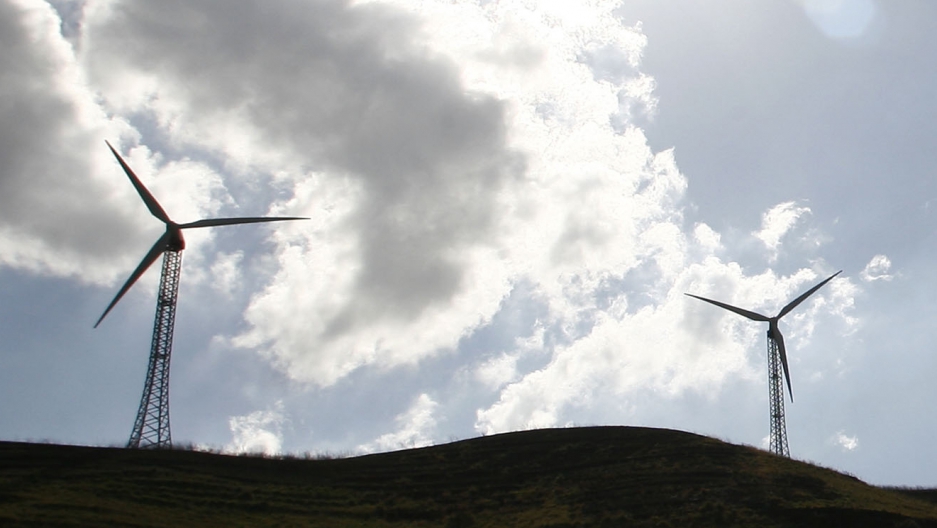 Wind turbines near the village of Patirnico, between Palermo and Trapani.
Credit: Marcello Paternostro
Share

ROME, Italy — If the 1970s mob classic “The Godfather” had been filmed today, you’d see giant wind turbines in the backdrop of scenes around Vito Corleone’s hometown. They’ve sprouted by the dozen in western Sicily, part of a green-power boom fueled by government subsidies.

They wouldn’t be out of place. Police have long suspected that much of the money has gone toward lining the pockets of figures such as Matteo Messina Denaro, the head of Cosa Nostra himself and Italy’s most-wanted man.

Just how much money became clear last week with the seizure of almost $2 billion in assets from a wind-power magnate believed to be Denaro’s frontman.

A plumber and electrician, Vito Nicastri amassed one of the largest wind and solar-power empires in Italy, earning him the nickname “lord of the wind.” It included 46 companies, dozens of bank accounts, villas, apartments, yachts and fast cars — the largest group of assets ever confiscated in Italy and an alarming indicator of the extent of the Mafia’s stake in clean energy.

One of the country’s most promising sectors, the renewables industry has surged even as the rest of the economy ground to a halt. Developers built more wind and solar plants in 2012 than in any previous year and added 5,000 jobs to a country wracked with unemployment.

The boom is almost entirely due to what were, at their peak, the most generous renewable incentives in the world, says Andrea Gilardoni, an economist at Milan’s Bocconi University.

“They were so high that all kinds of people have become involved,” he said. “Even cats and dogs can make money in this kind of climate.”

The government has doled out more than $75 billion to companies that produce wind and solar energy over the past six years, doubling and sometimes even tripling their revenues.

The bonanza prompted a gold rush for scores of energy companies that flocked to the country’s south, one of the sunniest and windiest places in Europe — only to collide with Italian bureaucracy. Anyone hoping to build a wind or solar plant was met with reams and reams of red tape.

In one case, International Power required more than six years to get a medium-sized wind farm approved. The company, now owned by French GDF Suez, had to deal with more than 50 various agencies and departments, any one of which could have delayed the process further.

Many firms turned to middlemen calling themselves “facilitators.” Able to procure approvals by tapping connections in local government, they became the gatekeepers of renewable energy and created a lucrative secondary market for certificates and approvals in which the Mafia has thrived.

Fees soared. In 2011, facilitators were demanding commissions as high as $520,000 per megawatt. At that price, acquiring permissions for a wind farm the size of Corleone’s would have cost more than $10 million.

The Mafia has been able to earn even more by insisting that companies that use its middlemen also hire its contractors. Green energy plants are also attractive investments for laundered cash: the Cosa Nostra and its affiliates are even thought to have constructed several plants themselves, such as one in the eastern Sicilian town of Mineo built by Nicastri.

On the anti-Mafia police’s radar since 2007, he first came to attention when his name appeared on a handwritten note sent to Palermo boss Salvatore Lo Piccolo, who was later arrested. Over the next six years, they observed his meteoric rise from a modest businessman to one of the biggest players on the renewables market.

Although the police have no evidence of direct contact between Nicastri and Messina Denaro, the investigator who led the record-breaking operation says his fortune would have been impossible without the knowledge and support of Sicily’s most powerful crime boss.

“You can’t operate in that context and with that volume of business unless you have certain connections,” Arturo De Felice told reporters.

De Felice touted the seizure as a major victory in the government’s scorched earth campaign against the Mafia. It was only the latest in a series of sting operations that have put scores of businesses under sequester, from wind farms to grocery stores.

But that won’t stop the river of energy incentives Gilardoni and other experts suggest lies at the root of the problem.

Although Italy lags behind its neighbors in areas such as research spending and broadband internet, it’s galloped ahead of the European Union’s target for clean electricity. Italy generates more than 26 percent of its power from renewable sources, enough from wind energy alone to light up a city the size of Rome.

More from GlobalPost: Who will be the next Cyprus?

Nevertheless, the subsidies keep coming, Gilardoni explains, because they’re part of a bubble no one wants to pop.

“For a long time, banks were underwriting 60 percent to 70 percent of the cost of these installations,” he says. “If those subsidies decreased, it would expose them to losses.”

Prime Minister Mario Monti has capped energy incentives at around $13.5 billion per year, most of them paid through a surcharge on utility bills of which most Italians aren’t even aware. At that pace, total subsidies to renewable energy will have cost Italian taxpayers a total of more than $220 billion by 2020, when they’re due to expire.

As police tackle renewable energy corruption, however, another front may be opening. Italy is so far behind in renewable heat generation, which only began receiving subsidies last year, it could still miss the EU’s overall renewable energy target.