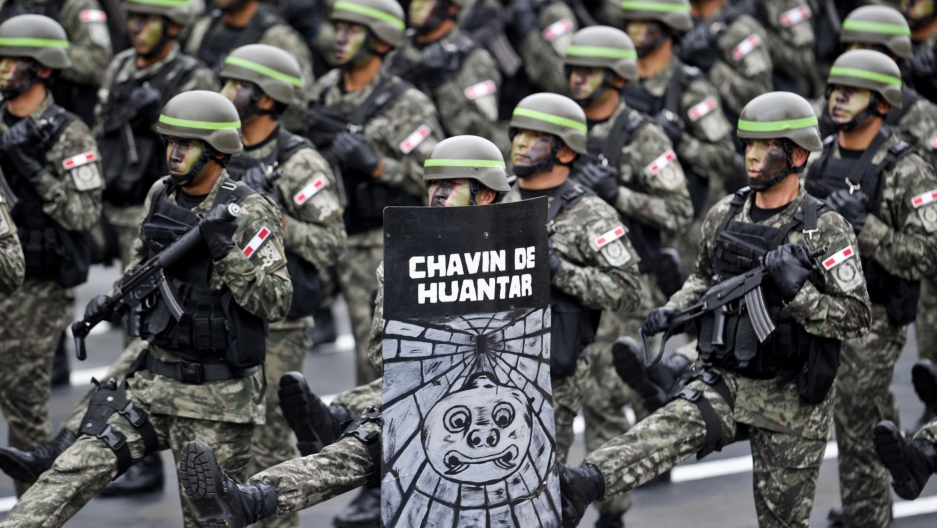 LIMA, Peru — The Peruvian government has sparked an uproar by reinstating the draft — but allowing those who can afford a $715 fine to skip military service.

The measure has been almost universally attacked as discriminating against the poor, particularly from the Amazon and Andes, where entire families earn less than that sum in a year, while allowing rich kids to legally dodge the draft.

It is especially polarizing in Peru where many of those with the cash to pay the fine are white, and most of those who can’t are either Afro-Peruvians or of indigenous descent.

The compulsory two-year military service was suddenly unveiled last month — without any prior public debate — and is intended to make up a shortfall of 30,000 recruits that has opened up since Peru abolished the draft more than a decade ago.

It comes at a time when the army is repeatedly getting sucked into the fight with remnants of the Shining Path rebels in remote Andean cloud forests.

Leading journalist Augusto Alvarez Rodrich, who has chaired Peru’s presidential debates in the past, described it as “unconstitutional” and militarily “obsolete.”

In addition to the fine, many critics have compared the obligatory nature of the draft and the conscripts’ miserable monthly pay of between $90 and $150 — less than half the minimum wage here of $290 — to “slavery.”

“It is incredible that it could be defended by a government that claims to defend inclusion,” Rodrich added.

Other unlikely bedfellows condemning the move include both leftist human rights campaigners and their sworn enemies, the hard-right supporters of former President Alberto Fujimori, now in jail for crimes against humanity.

The measure has also been criticized for undermining its armed forces’ combat capabilities.
Dardo Lopez-Dolz, head of Lima-based security analysts Peace Keeping Solutions, noted that no conscript force had won a war anywhere in the world in the last 30 years.

“This is looking backwards not forwards,” Lopez-Dolz told GlobalPost. “It is about the president remembering the way things were when he was young.”

Yet President Ollanta Humala, himself a former officer, wants to give the army the power to detain and question drug traffickers rather than just carrying out counterinsurgency operations and providing backup firepower to the police.

Heavily involved in the cocaine trade, the Shining Path has killed some 80 soldiers in the last five years, according to government data. And in April 2012, the group humiliated the armed forces when it kidnapped 36 workers from a gas project and then killed eight soldiers during a rescue attempt.

One wounded soldier, abandoned by his companions, walked for more than two weeks to escape the jungle, while the father of another had to retrieve his own son’s body after the military proved incapable.

Defense Minister Pedro Cateriano has insisted that conscripts will not become “cannon fodder” for the Khmer Rouge-style rebels, who slaughtered some 30,000 people during a civil war in the 1980s and 1990s, and that only elite troops will be sent to combat.

But that kind of military ineptitude plus a booming economy have made voluntary enlistment an unattractive option even for the poorest, a problem Humala wants to solve.

“We need a modern military service that respects the youth and gives them an opportunity,” the president told local media.

Yet his proposed remedy appears to turn logic on its head and has left many of Humala’s own supporters baffled and angry.

Daniel Mora, who served as the president’s first defense minister in 2011, told GlobalPost the best strategy was a fully professional military with pay and benefits that would attract high-quality candidates.

“The tendency is for smaller, professional more specialized armed forces but, given the political reality, we have little choice but to make up the numbers this way,” Mora, a congressman and former general, said.

That reality, Mora added, stems from the Economy Ministry’s failure to fund a 2009 law to provide more cash for the military, including raising the through-the-floor pay scale.

That’s a common scenario in Peru, with a constitution and legal system very different from US law, and where state employees from teachers to judges have been infuriated by the powerful Economy Minister Luis Miguel Castillo’s refusal to open the purse strings despite booming mining royalties — and legislation mandating he pay them more.

Other than the internal conflict against the Shining Path in the 1980s and 1990s, the country’s military has been involved in four wars in the last century. All of them were border skirmishes, one with Colombia in the 1930s and three with Ecuador, the most recent in 1995.

Recent tensions with Chile over the countries’ maritime border have eased after both Santiago and Lima agreed to accept an imminent ruling by the International Court of Justice, in the Hague, where Peru is currently suing its southern neighbor.

But Peru’s armed forces are heavily involved in civil defense, with different parts of the country vulnerable to earthquakes, tsunamis, flooding and, in the Andes, annual cold snaps that kill dozens of villagers.

Compulsory military service is not uncommon in Latin America. Bolivia, Colombia and Mexico each have it, while Chile also uses a lottery when there is a shortfall of volunteers.

With the exception of Colombia, none of those countries allows its citizens to get out of the draft by paying a fine.