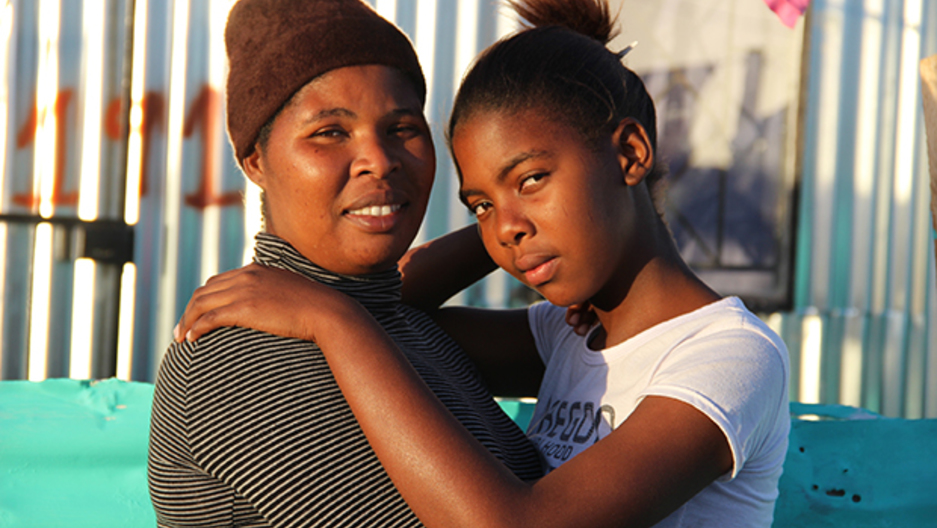 Amanda and her mother outside of their shack. (Photo: Anders Kelto)

On Fridays, Mrs. Godden – an English teacher at the Centre of Science and Technology (COSAT) – likes to have her students debate.

Early in the semester, she posed this question to a group of tenth-graders: Who can you talk to about important emotional issues – your parents, or your friends?

At first, the kids seemed hesitant to talk – perhaps because there was a reporter with a microphone in the room. But, eventually, things picked up.

Most students said they trust their friends more than their parents, and what they said about their parents was incredibly negative.

“Some of our parents are drunkards,” said one boy. “Some of the mothers are like serpents.”

One girl said that, here in the township of Khayelitsha, many parents abandon their children at a young age.

Another girl said you can’t tell your mother a secret because she’ll just tell it to others. “What is a mother?” she asked rhetorically. “Nothing.”

After the debate, I asked Mrs. Godden about these harsh comments. She said they reflect the students' lives at home. Not only do many students distrust their parents – they hardly speak to them.

“They really don’t communicate with their parents,” she said.

Mrs. Godden is far from the only one to have noticed that children and parents don’t communicate well.

Social scientists with the South African government think poor communication may be linked to a range of problems students face – including underperformance in school, and weak social skills. Worst of all, parents who don’t communicate well with their kids may be more likely to abuse them. So the government has begun running interventions around the country to address the problem. One workshop was held here at COSAT.

On a Saturday morning, 20 students and their mothers gathered in a school classroom. An eighth-grader named Amanda wore a bright pink-and-blue outfit with matching shoes.

“I’m here because I heard that this workshop is about creating a relationship between parents and teenagers,” Amanda said.

But there was another reason she had come: she had been getting into huge – and often violent – fights with her mom.

“My mother is very harsh,” Amanda said. “She will beat me.”

Amanda hoped the workshop would put an end to that. She had urged her mother to come.

Amanda's mother, Zanele, wore a yellow t-shirt and had her hair pulled back in tight braids. She said she first started using corporal punishment on Amanda because Amanda was misbehaving.

“The first time I beat her, it was because she didn’t come home when I wanted her to,” Zanele said.

Zanele also beat Amanda when Amanda didn’t do her homework or clean the house.

“When I talk to her, it seems like she doesn’t care,” Zanele said. “That’s why I hit her.”

Zanele talks openly about the fact that she beats Amanda – perhaps because corporal punishment is so common in South Africa.

But Zanele is also coping with a lot of stress. She is raising five kids. Two are hers, and three belong to her sister, who died of AIDS a few years ago. Her only income is a small monthly grant from the government.

Anik Gevers, the psychologist who ran the intervention at COSAT, works for the South African government’s Medical Research Council and specializes in adolescent mental health. She says the issue she is trying to address with the intervention is child abuse.

Gevers says child abuse is a massive problem in South Africa, and it has ripple effects. “It may also contribute to a broader culture of using violence,” she says.

Gevers also taught parents and teens how to resolve conflicts peacefully. Her overall aim was to show parents that they can discipline children without becoming abusive. She says that, so far, all the parents have been receptive to this message.

Several weeks after the workshop at COSAT, I met up with Amanda, the eighth-grader, at home. I wanted to hear how things had changed.

Amanda's family of six (her mother and five children) lives in a one-room metal shack. There is a single bed. Duffel bags of clothes are stacked in the corner. A thin curtain separates the bedroom from a tiny kitchen.

Amanda’s mom cooks stew on a small table, and Amanda sweeps the floor while her siblings play. 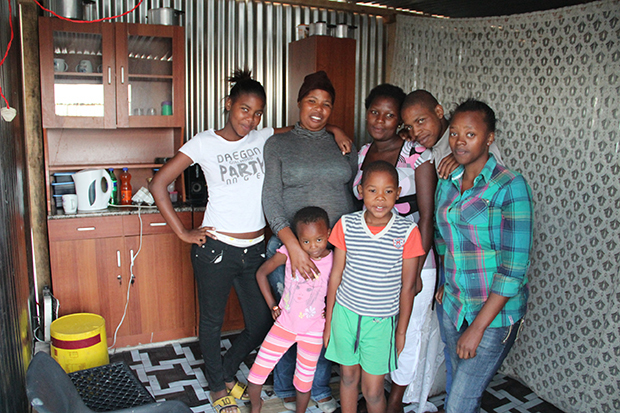 Amanda says that, since participating in the workshop, her relationship with her mother has been much better.

On a recent night, she and a friend from school were working on a science project. “I was coming in and out of the house, and it was late – I think it was half past nine,” Amanda says.

If she had come home at that hour before the workshop, her mom would have shouted and her and beat her, she says. But this time, her mom calmly asked why she was so late.

“Then I explained to her that I’m doing this project,” Amanda says. “And then everything was okay.”

Amanda’s mother, Zanele, agrees that their relationship has improved dramatically, and she says being able to solve conflicts peacefully has made her life a lot less stressful.

“Now, when Amanda and I have a problem, we don’t fight. We just stay calm and talk,” Zanele says.

But there is one exception: If Amanda does something wrong and can’t explain her behavior, her mother says she can still beat her daughter. “I know it’s not good to beat a child,” Zanele says, "but sometimes you have to. It’s a way to say no, and to show your child what you’re capable of.”

She says that, so far, that hasn’t been necessary.

Will Amanda and her mom be able to maintain this newfound peace at home? That is something the government researchers running the intervention want to know. They plan to follow this family and other workshop participants over the next few years.

Anik Gevers, the program’s director in Cape Town, hopes the long-term results of the study will show a reduction in violence. And then, she hopes, the government will significantly scale up this intervention and help bring peace to many more children and parents.