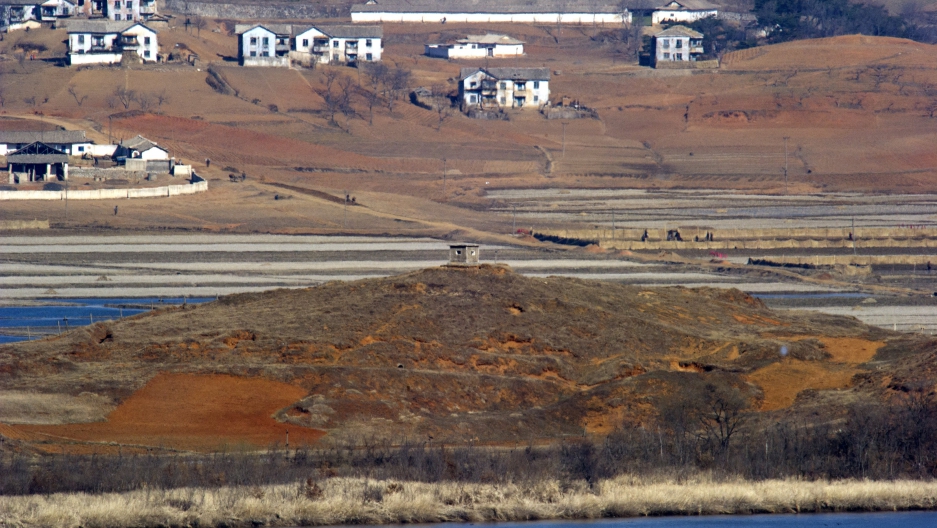 A North Korean guard post (C) in the border county of Kaepoong is seen from a South Korean observation post in Paju near the Demilitarized Zone (DMZ) dividing the two Koreas on March 29, 2013.
Credit: JUNG YEON-JE
Share

SEOUL, South Korea — North Korea has decided to bar entry to South Korean workers to the joint Kaesong industrial park, and is currently permitting South Koreans staying at the border town to leave the facility only.

The move came only a day after the North announced it would restart the Yongbyon nuclear reactor, and step up production of nuclear weapons materials, an announcement that was fast met with international condemnation.

GlobalPost senior correspondent in Korea, Geoffrey Cain, reports that the North "walked a fine line today when it denied access to South Koreans trying to get to their workplaces at the Kaesong Industrial Zone."

"They reportedly waited for two hours, but the train never came. The Ministry of Unification soon called on the North to let them in to no avail," Cain said from Seoul.

The North Korean regime put out a statement saying it was angry over South Korea's recent assertions that the North would never close the complex, because it's too much of a money-maker.

Over 800 South Korean workers had spent the night in the park, added Reuters, as the South demanded that entry to the park be restored.

"South Korea's government deeply regrets the entry ban and urges it be lifted immediately," said ministry spokesman Kim Hyung-seok of the move, according to the Yonhap news agency, adding the government was working to ensure the safety of the South Koreans who remained there.

GlobalPost's Cain said the regime has been known to halt entrances to the zone when tensions are high, as was seen in 2009.

"Call it testing the waters, seeing how far it can go in backing up its war rhetoric without sparking a retaliation," Cain said.

Analysts suspected the move was another strike against Seoul by the North Korean regime, in an attempt to prove it could stand against its wealthier Southern neighbor.

"It appears to be a temporary measure intended to raise tensions with the South, having declared it is entering a state of war and having been ridiculed for keeping Kaesong open for financial reasons," said Cheong Seong-chang of the Sejong Institute think tank to Reuters.

The LA Times notes the park was previously closed in 2009, in retaliation for the joint US-South Korean Key Resolve military drill.