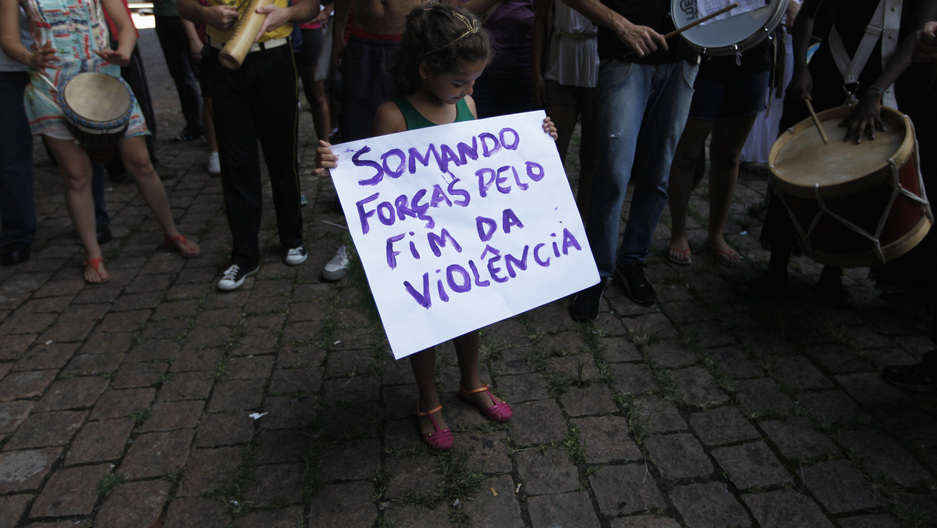 A girl holds a banner as people play drums during the "One Billion Rising" campaign in Sao Paulo February 16, 2013. "One Billion Rising", which is a campaign based on the statistic that 1 in 3 women will be beaten or raped in her lifetime, aims to call for an end to violence against women and girls, according to organizers. The banner reads: "Joining forces for an end to violence". REUTERS/Nacho Doce (BRAZIL - Tags: SOCIETY) - RTR3DVUU

The circumstances of this story are eerily similar to the gang rape of an American woman in Delhi this past December.

In Rio de Janeiro, Brazil, an American woman and her French boyfriend boarded a van – an informal mode of transportation in Brazil— and they were held captive for six hours by the driver and his two accomplices.

These three young men, gang-raped the young woman while her male companion was beaten.

It's a horrific story and even more so in light of recent news that two other Brazilian women have also forward with news that they too were victims of this terrible crime.

Anchor, Marco Werman speaks with Brazilian sociologist Jacqueline Pitanguy. She is the director of CEPIA a non-profit that focuses on violence against women in Brazil.