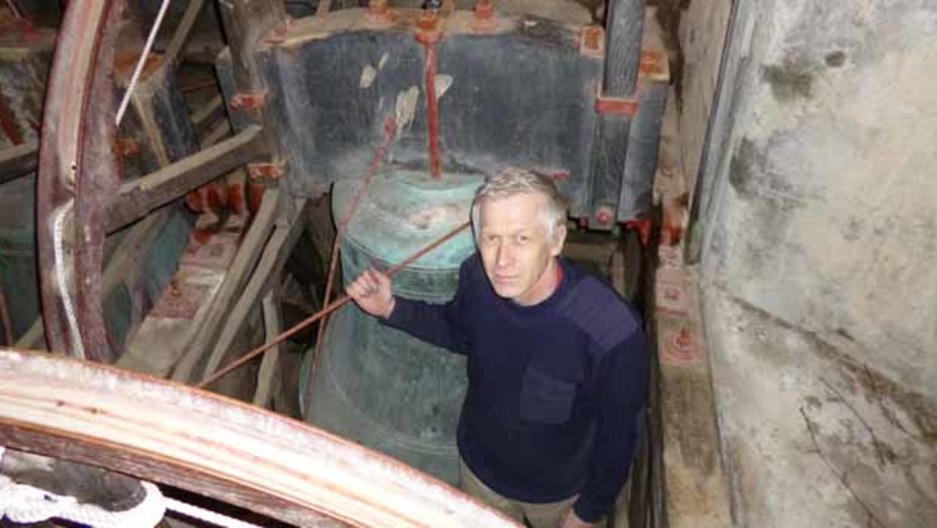 The 1,500 residents of Chagford, a quaint town in Devon County, England are used to the sound of bells coming from the church in the center of town.

The bells ring on wedding days, Sunday mornings, and Tuesday nights, when the bell ringers practice.

The church — St. Michael the Archangel — dates back to 1261, though the present granite structure, including the tower that holds the bells, was mostly built in the early 1400s.

"It's like a continuous unbroken tradition going back to the 1400s that we're carrying on really," Bint says.

Another Chagford bell ringer, Laurence Bennie, has been ringing at St. Michael's for 34 years. His mother was a ringer, and so are his children.

"He's my son, and he's my son," Bennie says pointing to his children. "They started learning far younger than I started to learn. And Stuart, he's a far better ringer than I ever will be."

Stuart, and Bennie's other son, Gram, stand in a circle with six other ringers. They each firmly grasp a thick rope attached to one of the eight bells in the tower above.

Each of the ringers pulls their rope in clockwise order until Stuart, who's conducting on the day that I visited, calls out a different bell sequence.

"He's actually calling out the changes of the bells," Bernie says. "He will have either a set pattern that he'll ring to, or he'll make up one as he's going along. So we all have to have our wits about us to make sure we do it right."

A steep, spiral, stone staircase leads up the tower to the belfry, where eight bronze bells are suspended between massive oak beams.

"You go to any tower in Great Britain and you'll find the bells are hung in a similar way," Bernie says, "whether it be on an oak frame like this or a new modern steel frame in other towns."

On the side of each bell is a huge wooden wheel, attached to the bell's top. The wheels are what give the ringers the leverage they need to keep momentum and swing the heavy bells. The heavier the bell, the larger the wheel. The largest wheel is attached to the tenor.

The tenor bell, the biggest one, weighs about eighteen hundred pounds. At 475 pounds the treble bell is the lightest.

"Nearly all church bells are made out of a bronze. That's what gives them their distinctive tone and sound. So they are actually all tuned to a musical note, but they all also have all these harmonics inside them, which is all part of what the bells all about," Bernie says.

Every team of bell ringers has a captain. Percy Rice became captain in 1939, and kept the position until two years before his death. Like an inheritance, bell ringing often passes from generation to generation.

Julia Endecott has been the bell captain here since 1977; she took over from her father, Percy Rice.

"We're very lucky here because we've got such a lot of young people and it's thriving, where a lot of towers are struggling," Endecott says.

But St. Michael's is not without its own struggles. In 2000, the church architect discovered that the five oak foundation beams that hold the bells were badly rotted by moisture that had seeped in from the porous granite.

After 11 months of silence, the bell frame was fixed just in time for Christmas, continuing a 600 year tradition.