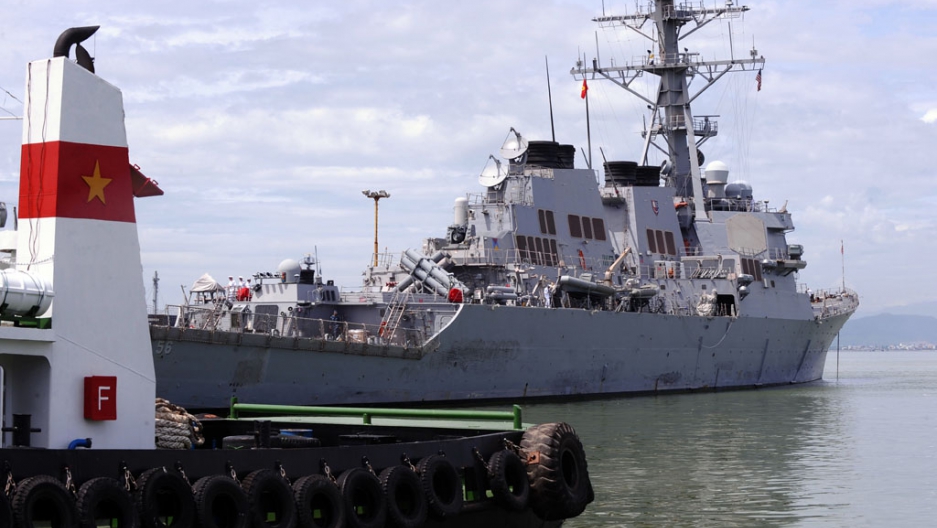 The US destoryer USS John S. McCain lies at anchor at Tien Sa port in the central costal city of Danang on August 10, 2010. The warship has been sent to the Asia-Pacific region as tensions mount over North Korea's saber-rattling.
Credit: HOANG DINH NAM
Share

A second guided-missile destroyer is being deployed to the Asia-Pacific region, US officials confirmed Tuesday.

The USS Decatur, which provides ballistic missile defense options, will join the USS John McCain, which was deployed on Monday, Reuters reported. No further details were given.

The news comes as tensions mount in the Korean Peninsula over the North's escalating threats. Also on Tuesday, North Korea said it planned to reopen its nuclear facilities, including the Yongbyon reactor.

While Agence France-Presse reported that the United States had also deployed a radar called the Sea-based X-band Radar (SBX) to the ocean east of Japan, citing a Pentagon official, other officials told Reuters no definite decisions had been made.

The Pentagon official, who spoke to AFP anonymously, said the move was a "routine deployment" that was "not in relation to current events." The radar would be used to track incoming missiles as part of a missile defense system.

"Nuclear threats are not a game. Aggressive rhetoric and military posturing only result in counter-actions, and fuel fear and instability," he said at a news conference, according to NBC News.

Secretary of State John Kerry held a joint press conference with South Korean Foreign Minister Yun Byung-Se on Tuesday, and said the United States was prepared to hold talks if North Korea showed that it was serious about dialogue.

"We have no ambitions there. We want a community of nations," Kerry said, adding that in contrast the North operates gulags, holds thousands of political prisoners, and starves its people to build a nuclear program.

Kerry reiterated that the US would defend itself and its ally, South Korea.

Even the North's big brother China seems tired of Kim Jong Un's threats. China has not criticized the United States for flying B-2 and F-22 stealth jets in joint exercises with South Korea because it sees the US' presence as a necessary deterrent to the North, a Chinese military expert told Reuters.

Deployment of the F-22 Raptor stealth fighters was part of a joint military exercise the United States is conducting with South Korea, called "Foal Eagle," which is scheduled to last until April 30.

Reuters noted that the United States is attempting to walk a fine line between avoiding provoking North Korea and reassuring allies in Seoul and Tokyo that it is ready to respond to any moves from Pyongyang.