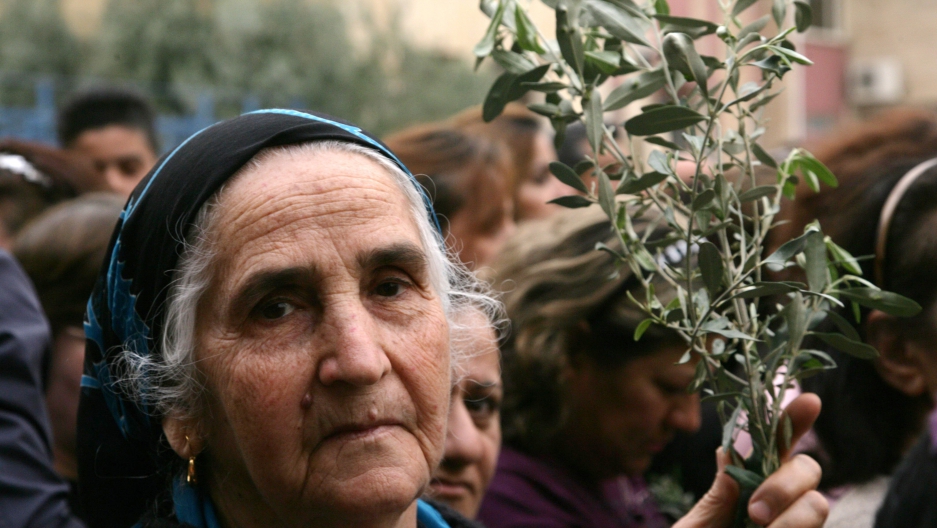 An Iraqi Christian women carries an olive branch in the northern Iraqi Kurdish city of Arbil as Christians gather at the St. Joseph Church, on March 23, 2013, to celebrate Palm Sunday that marks the triumphant return of Jesus Christ to Jerusalem when a cheering crowd greeted him waving palm leaves the week before his death.
Credit: Safin Hamed
Share

This is the fourth in a series of posts about dwindling Christian communities in the Middle East.

Today in churches all over the world, the scripture tells of the story of the ‘road to Emmaus’ on the day after Easter Sunday. In the Gospel According to Luke, two of Jesus’ disciples headed out to a village called Emmaus, about eight miles northwest of Jerusalem.

It’s quite possible they were fleeing Roman authorities in fear of being associated with Jesus and his radical message. And it was there on the road to Emmaus more than 2,000 years ago that something mystical happened, a story with a good deal of resonance today.

Whether you believe in the Bible or not, Emmaus is not a fictional town. It is a real place in the West Bank off of what is known today as the “Modi’im Road,” along which there are a series of Israeli military checkpoints. On an ancient path that leads to a Palestinian village there are Roman paving stones which, since the time of the Crusades, have been believed to be the biblical setting of the story of Emmaus. The story is remembered every year in a Christian pilgrimage on this ancient path where there are services in which bread baked in Jerusalem is served to parishioners.

Today this village is called El-Qubeibeh and the Palestinian Christian presence in the village had dwindled to just one family, at least the last time I was there several years ago. The last Christian family was headed by Anton Quliyoba, a taxi driver who was the oldest of six brothers. All five of his younger brothers had moved to Los Angeles, and I often wonder if he has joined them in immigrating to Los Angeles and if there is any Christian presence at all left in the predominantly Muslim Palestinian village that is believed to be the same place where the story of Emmaus took place.

The story of Emmaus has a kind of spiritual resonance for those who wish to understand why a living Christian presence is important in the Middle East. The historical truth is that the Christian Arabs have always played an important role in promoting democracy within the countries of the Middle East.

It was often Christian thinkers and leaders who were in the vanguard of Arab nationalism, which these days is a kind of bulwark against Islamic fundamentalism. As members of a religious minority, historians such as Fouad Ajami say they have always sought to push for political and legal structures that recognize their rights and in so doing they have often been in the vanguard of movements that supported tolerance and democracy.

History is always complex and layered in the Middle East, and there is always a danger in over simplifying. So I want to be clear here that I am not intending to say the history of Christendom in the Middle East has not left a bloody trail. It certainly has — from the barbarism of the Crusades to the Lebanese Civil War of the 1970s and 1980s when Christian factions were as murderous as any of their Muslim or Druse counterparts and to President George Bush’s war in Iraq which plenty of Iraqis viewed — rightly or wrongly — as an exertion of ‘American Christian’ power.

But woven into that history is a lively intellectual ferment that supports democracy and secular nationalism and has been largely shaped by Arab thinkers and leaders who were Christian. Many of the non-violent movements among Palestinians protesting Israeli occupation have come out of the Palestinian Christian town of Bethlehem and the nearby Christian village of Beit Sahour. In Syria and Lebanon, the late 19th and early 20th century Arab Awakening that put forward the idea of secular democracy as the way to challenge colonial hegemony was led largely by Christian intellectuals such as Butrus Al-Bustani and Michel Aflaq.

This was crystallized in George Antonius’s 1938 work, “The Arab Awakening,” which Ajami and other say has largely been as the manifesto of the Arab national movement.

This is a long and complex history and one that is not often considered in the contemporary analysis of all that is happening on the ground in the Middle East in the aftermath of the Arab Spring which toppled dictators in Tunisia, Libya and Egypt and ignited a raging civil war in Syria and which remains a smoldering, uncertain chapter of the Middle East’s modern history. But amid all the smoke two years since the historic events of the Arab Spring and ten years since the start of the war in Iraq, the fact is that Christians are fleeing in unprecedented numbers from Egypt, Syria and Iraq.

And so the dramatic Christian disappearance from the land of the Middle East is a small story worth telling in this larger context of tumult and change brought on by the post-9/11 era and the Arab Spring, and one that could have great import.

GlobalPost’s “Belief” blog will continue bringing forward these stories from Syria, Lebanon, Israel/Palestine and Iraq in an effort to document what could be remembered as an historic exodus of Christians. Our series began on Good Friday, at least according to the Gregorian calendar which is followed by the Roman Catholic Church and most Western denominations.

That biblical passage is one that many Christian communities in the Middle East are reflecting on as they literally see their own living Christian presence disappear before their eyes. It is worth noting that the two disciples who fled Jerusalem on that day more than 2,000 years ago were joined by virtually all of the disciples. It was only the disciple James, biblical historians say, who did not emigrate in some fashion out of the Holy Land. And so the steady emigration that is leaving the Middle East with a dwindling Christian presence has in some ways been part of the continuum of the history of the church. And it is a part of history we will be following here in the “Belief” blog.

Read parts one, two, and three of this series, about dwindling Christian communities in the Middle East.