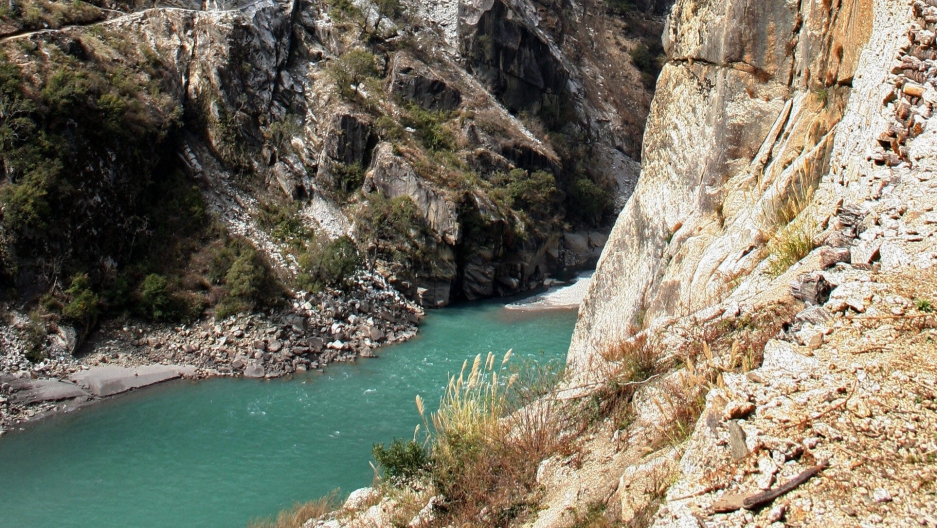 The Nujiang River supports a quarter of China’s plant and animal species, many of which are found nowhere else in the world.
Credit: AFP
Share

HONG KONG, China — Nearly a decade after Chinese environmentalists achieved one of their greatest successes by stalling plans to build 13 dams on the Nujiang, one of China’s two remaining free-flowing rivers, the “angry river” is under threat again.

Earlier this year, the government announced it would help power the country’s densely populated, industry-heavy eastern seaboard by re-instating a project to build five new mega-dams along the Nujiang and several other waterways in China’s biologically rich southwest.

Flowing nearly 1,800 miles from the Tibetan plateau through southwestern Yunnan Province into Thailand and Myanmar — where it’s known as the Salween — the Nujiang supports an estimated 25 percent of China’s plant and animal species, many of which are found nowhere else in the world.

Near the Burmese border, the Nujiang slices a 13,000 foot-deep gorge through some of the world’s most dramatic mountain landscapes.

American University professor Judith Shapiro, author of China's Environmental Challenges, calls the plans a “tremendous symbolic setback” for China’s environmental activists, for whom protecting the Nujiang has been a signature cause.

“Their creative and sustained mobilization to save one of the world's most beautiful rivers represented the maturation of Chinese environmentalism," she says.

Proposals to dam the Nujiang date back to 2003, when officials in Yunnan Province devised plans to construct a massive hydropower complex to produce more power than the controversial Three Gorges Dam, the world's largest.

The project would have required thousands of people — many of them minorities — to be relocated from the river’s steep slopes.

Critics feared their compensation would be inadequate and that the environmental impact studies for the project were flawed. Activists took villagers who would have been affected to see existing resettlement sites that had failed.

The tactics helped produce a backlash severe enough for the authorities to take the rare step of tabling their plans. Damming the Nujiang, Prime Minister Wen Jiabao announced, would be halted until the completion of a “careful examination” of its impact.

Ten years on, Beijing’s reversal is prompting public surprise and exasperation, some of it on Weibo, China’s version of Twitter.

“Nujiang hydropower plans have come back to life?” wrote Weibo user Ludoweixi in a typical post. “If the Nujiang River gets angry [nu], they also won’t be able to survive.”

Among the most serious threats, geologists say, is dangerous seismic activity, thanks to the Nujiang’s position along a fault line. Creating reservoirs by damming the river, they warn, would court certain disaster.

In 2011, a group of geologists wrote the government to warn that the area’s frequent landslides, earthquakes and downpours created such “high seismic and geological risks” that “large dams should not be built here.”

The battle over the Nujiang is taking place against the backdrop of an enormous surge in China's energy appetite and concomitant boom in dam construction. The country has built more than 88,000 dams since 1949, 22,000 of which stand taller than four stories — more mega-dams than any other country.

The conflict also shines a light on a fundamental dilemma in China’s development: how to balance the burgeoning need for energy with the kind of environmental protection increasingly demanded by the middle class.

That’s why the government may see the Nujiang project as indispensable despite its controversy.

Ed Grumbine, a scholar working in Yunnan, says the desperate need to reduce emissions in one of the world’s most polluted countries has put China “between a rock and a hard place” when it comes to hydropower development.

“Energy demand is still going up steeply — maybe 9.5 percent growth this year — and coal is still number one,” he says. “So this means the government has to max out all other options to keep carbon emissions down. Every sector is under pressure to grow — nukes, wind, solar, hydro — and yes, coal. As a result, all China's rivers are at risk — and will no doubt be developed.”

Others believe the authorities must explore different options. Katy Yan, China program coordinator at the International Rivers organization, says the country should do more to develop wind and solar resources and increase energy efficiency.

"Hydropower isn’t going to solve China’s rising demand for energy," she says. "What’s more important and a harder question is talking about China’s fundamental demand for energy, and measures that can deal with the demand.”

The impact of China’s energy hunger will be felt beyond its borders. Some 7 million people in neighboring Burma and Thailand live in the Nujiang’s lower basin, which would almost certainly be affected by the construction of five dams upriver.

“Sadly, the Nu River dams also represent China's big-power disrespect for the equitable sharing of water with downstream neighbors in Southeast Asia,” she says, “where China's control of the headwaters of the major rivers that provide livelihoods to millions is creating a deep sense of unease.”

Environmentalists are currently pinning their hopes on trying to torpedo the plans again before construction begins in earnest in 2015. Yan of International Rivers says Chinese NGOs are coordinating efforts to draw attention to the dams’ potential negative impact.

The main challenge, Grumbine says, is to convince ordinary people that defending a free-flowing river is more than a peripheral concern.

“The Nu is more special to foreigners,” he says. “As an undammed river, it fits our value set of wildness being good to protect. Folks living in the Nu are much more utilitarian than that.”