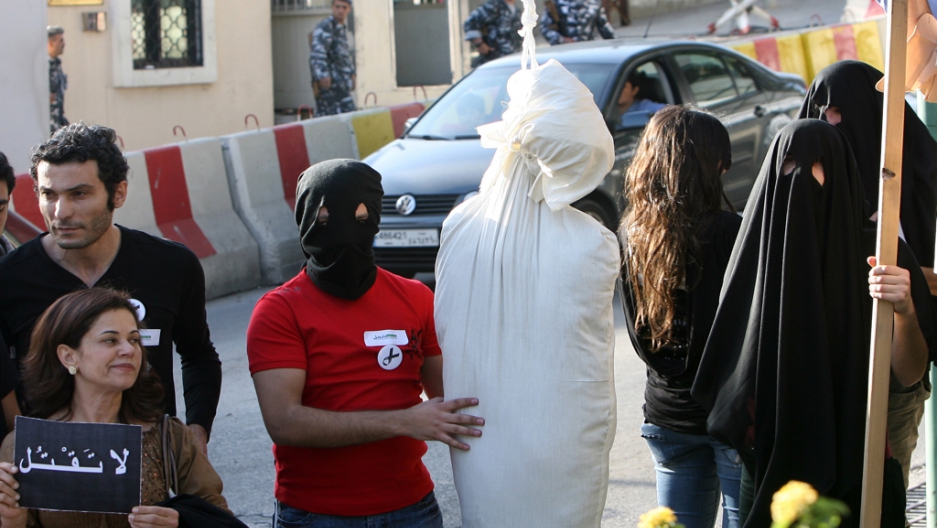 Setting up a mock gallows with a dummy on a rope, about 25 Lebanese human rights activists protest outside the Saudi embassy in Beirut on April 1, 2010 against capital punishment as Lebanon's envoy to Riyadh said he has yet to be informed of a Saudi decision to behead a Lebanese former TV presenter convicted of sorcery. The United Nations says Saudi Arabia has seen a sharp rise in executions in 2011.
Credit: ANWAR AMRO
Share

A young man accused of paralyzing his former friend will be punished by full paralysis in a brutal eye-for-eye sentencing in Saudi Arabia, according to the Saudi Gazette.

Imprisoned since the age of 14 on charges of stabbing a former friend, leaving him paralyzed, Sunday's court decision has 24-year-old Ali Al-Khawahir facing a sentence of full paralysis unless he can pay the equivalent of nearly $270,000, said the Gazette.

The original amount of compensation was double that, but it has been lowered, said ArabianBusiness.com.

The Gazette said a campaign helped raise money for Ali Al-Khawahir after he missed his father's funeral due to his long imprisonment, but it was not clear whether that was the reason the amount had changed.

It's still an impossibly high amount for Ali Al-Khawahir's 60-year-old mother, who told Al-Hayat daily she sympathizes with the victim of her son's attack but can't afford to fully compensate his family and free her son.

“Ten years have passed with hundreds of sleepless nights," the Gazette quoted her as telling Al-Hayat. "My hair has become grey at a young age because of my son’s problem. I have been frightened to death whenever I think about my son’s fate and that he will have to be paralyzed," she said.