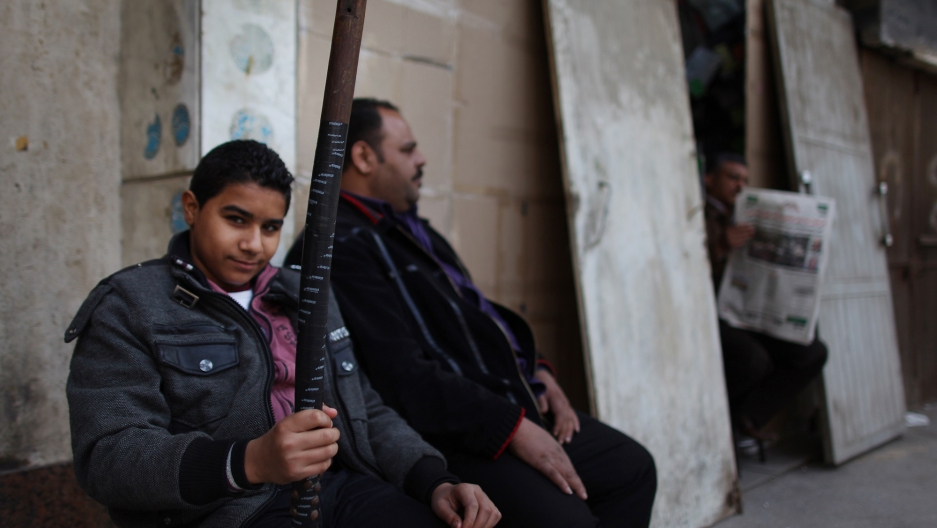 A boy holds a cudgel as he helps his father guard a property in Cairo, Egypt.
Credit: Peter Macdiarmid
Share

AL GUINDEYA, Egypt — The village of Al Guindeya cannot be found on a map.

But the tiny enclave in the Nile Delta north of Cairo — populated by just 20 families — made its name this month when residents mobbed a man they suspected of being a thief, tying him up, beating him to death, and leaving his body outside the local mosque for all to see.

“The people here want to make an example to the thieves, so they are scared and don’t enter our village,” said 24-year-old resident, Yassin. The pharmacy where he works is just steps from where the body was found.

“It’s not right for us to take the law into our own hands," he said. "But there is nothing we can do. The people must defend themselves.”

The deadly, public lynching in Al Guindeya, while not the first, is part of a rise in vigilante incidents and civilian-on-civilian violence taking place across Egypt as law and order and state authority break down due to heightened political instability.

In most instances, townspeople like those in Al Guindeya, anxious over growing insecurity, are dispensing often-lethal mob justice on citizens they either know or suspect to be criminals. In others, civilians have battled each other on the streets over politics, basing their attacks on presumed political affiliation, while police stand idly by.

Analysts say both types of violence are hallmarks of a gradually failing state either unwilling or unable to enforce the law.

“It’s a very dangerous development, and it could lead to state failure,” said Hisham Kassem, a longtime rights activist and Cairo-based publisher.

Earlier this month, the attorney general appointed by President Mohamed Morsi called on civilians to arrest lawbreakers and hand them over to police.

“If contempt for the authorities continues to grow, and people feel more and more that they have to take matters into their own hands, it will be a disaster,” Kassem said. “And it is sad that people are being attacked for their political persuasions. But people feel the law cannot touch them any more.”

Last week, near the Cairo headquarters of the government-aligned Islamic social movement, the Muslim Brotherhood, armed anti-Islamist protesters clashed with Brotherhood supporters in a daylong spasm of violence over President Morsi’s legitimacy.

Opponents of Morsi, who once led the Brotherhood, feel state institutions have been closed off to them, leaving little but street violence as a means to exercise democracy. The Brotherhood, worried an increasingly ambivalent police force would fail to protect their headquarters, mobilized civilian committees to fight off demonstrators.

Each side exacted brutality on the other, beating and even firing weapons at one another, arresting rival demonstrators and holding them prisoner in makeshift detention centers in the area, where some were assaulted further.

Police stationed nearby did not intervene, according to witnesses. And anti-Morsi protesters were specifically seeking out Brotherhood supporters to ambush based on appearance, setting up checkpoints and targeting those who “looked Islamist,” said Egyptian photographer Sabry Khaled.

“Of course they knew who we were from the way we looked,” Ayman Abdel Ghani, a leading Brotherhood member in Cairo, said of the clashes. “And we knew from the way that they looked. They are thugs.”

In Cairo, the civil strife has clear political overtones. But in the provinces, it’s mostly security chaos that is spurring the vigilante mobs.

Egypt’s police forces have never fully recovered from the uprising that made their institutions a primary target two years ago. As a result, the country has seen a progressive rise in violent crime.

In Al Guindeya, a cluster of dun-colored houses perched on a major highway, residents speak of near-daily hijackings, theft, and even gunfights on the road.

“There is no law in the country. We see no security here,” said one young male resident of the village, who did not want to give his name. “So if someone confronts us with an automatic gun and steals our cars and our cattle — and there are no police? We have to react.”

Earlier this month in Gharbeya, another Nile Delta province, residents beat to death two men locals said were attempting to steal a motorized rickshaw. They later hanged the corpses from an open-air bus terminal, while crowds yelled “kill them!” according to videos taken of the incident.

In another video posted to YouTube this month by a member of Egypt’s Dostour Party, crowds surround the charred and still-flaming corpses of two men, one of whom the caption identifies as a thief that stole his cousin’s money. The video says the incident was in Sharqeya province, close to Al Guindeya, but the information could not be verified.

GlobalPost analysis: Will Algeria's army be the dark horse in next year's election?

Police in the area admit they are virtually powerless to stop such mobs.

“There are more villagers than there are policemen,” said Brigadier Hany Abdel Maboud, deputy director of the Belbeis police station that is handling the Al Guindeya case. “And what can we do in front of so many people who are against us?”

Some Al Guindeya residents said the village was emboldened by its actions against the alleged thief, ensuring the delivery of an otherwise absent justice.

“The people were proud, it gave them some power,” Yassin said.

But the lynching visibly shook others.

“We are afraid,” said one woman, who did not want to give her name. She found the body outside her storefront next to the mosque. “I don’t want anything to do with this. It will be a big problem for the village.”