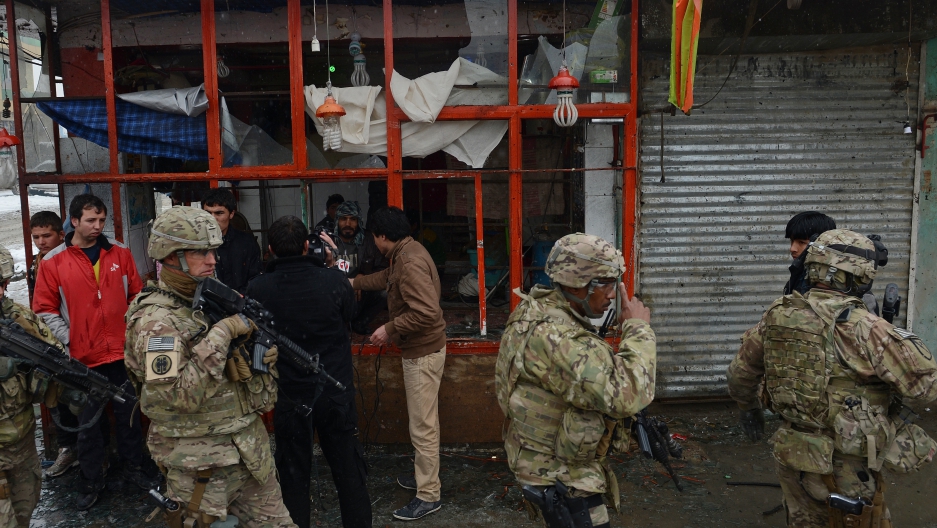 US soldiers at the scene of a suicide attack against a bus carrying Afghan army personnel in Kabul in February 2013.
Credit: Shah Marai
Share

KABUL, Afghanistan — Zafar Khan Amiri had cleared some of winter’s last snow from in front of his store and gone inside to serve a customer when the suicide bomber struck.

The explosion sent food falling from the shelves and for a few minutes Amiri stayed where he was, too scared or too confused to move. Only after the shouting and screaming reached him did he step back out into the cold morning air.

A bus door lay on the sidewalk he had just cleaned, 80 feet from the rest of the vehicle. His neighbor, an Afghan army colonel who had been shopping for bread near the site of the blast, also lay on the ground badly hurt. Further down, a baker, two women and a pair of students were wounded.

While there are dozens of ways to be killed and injured by the war in Afghanistan, suicide bombings breed a unique kind of paranoia, fear and soul-searching that make them a hugely potent weapon.

Unheard of during the mujahideen's struggle against the Soviet Union in the 1980s, they are routine today. There have been at least four such attacks in Kabul alone in the last three months. More attempts have been foiled.

Each incident leaves behind a feeling that nowhere is safe, and prompts fresh debate about the nature of the conflict here.

The Taliban's target near Amiri's shop on February 27 was a bus carrying Afghan soldiers, with the perpetrator crawling under the vehicle to detonate his bomb when it stopped to collect passengers.

His was the only reported death but everyone had been reminded of the challenges ahead as the United States and its allies prepare to leave the country next year.

Although suicide is forbidden in Islam, militants and their supporters believe these attacks are acts of martyrdom in which the body is sacrificed in the name of god.

Earlier this month, the chairman of the All Pakistan Ulema Council, Tahir Ashrafi, caused controversy when he was quoted as saying suicide bombings are permitted here.

His alleged comments came after the council refused to attend a religious conference the Afghan government planned to hold which would have officially condemned the attacks.

For opponents of the insurgents, it was further proof the Taliban and other rebel groups are tools of Islamabad, trained in camps across the border to blow themselves up in places like Kabul.

However, the idea that suicide bombings are a purely foreign creation ignores a wider theological discussion that’s been happening inside Afghanistan for years.

They became a common weapon in the war in 2006, when insurgents in Iraq were also employing them to devastating effect. All the main Afghan militant groups have since adopted them as a vital part of their strategy.

In a September 2011 statement the Taliban denied using child suicide bombers, but defended the principle of suicide attacks, calling them "an effective military tactic" that was justified under strict preconditions.

Those who want to carry out "martyrdom-seeking operations" must be well trained, motivated by their belief in god and able to "inflict heavy losses on the enemy,” the Taliban said.

Opinions elsewhere vary. Fazlul Hadi Wazeen is a political analyst who has studied Islam at universities in Pakistan and Saudi Arabia. As a teenager he was imprisoned in Pul-e-Charkhi jail on the outskirts of Kabul for helping the mujahideen fight the communists — an experience he describes as worse than being in the Bastille.

"It was a very difficult situation, ok?” he said. “If I was allowed, it would have been better to kill myself.”

Wazeen told GlobalPost the debate about whether suicide bombings are theologically permissible has never been fully resolved because there are no clear examples from the time of the Prophet Mohammad, the caliphates or the crusades of Muslims being sent to kill themselves in order to kill their enemies.

He says Afghanistan is being occupied and the insurgency is a form of resistance. But he’s careful not to condone or condemn suicide attacks.

"Until now I haven't read a ruling from a known Afghan scholar that speaks about if this is allowed or not," he said.

Suicide bombings can seem entirely random, but most of the time there is at least a pretense of a military or political target even when civilians are the victims.

However, one of the deadliest attacks of the war was directed against Shia Muslims commemorating the holy day of Ashura in December 2011.

Scores of innocent people were killed for no apparent reason other than their faith. Among them were seven of Mohammad Qasim's relatives, including his wife, daughter-in-law and two grandchildren. Unusually, Lashkar-e-Jhangvi — a Pakistan-based militant group notorious for its extreme sectarian views — claimed responsibility.

"I saw all my family lying down and I collected every single one of them with my own hands," Qasim said.

More than a year later, suicide bombings continue on an almost weekly basis across Afghanistan. Qasim still goes back to the site of the explosion, near a shrine in Kabul. He doesn’t expect peace any time soon.

"It's impossible for Muslims to struggle with these suicide attackers," he said. "If a man is tying a bomb to himself and going to a place or ceremony, blowing himself up and turning people’s destiny to dust, this is not an Islamic act."